It's All Coming Back to Me Now

It's All Coming Back to Me Now

The song has had three major releases, all roughly belonging to the genre. The first version appeared on the "Original Sin", recorded by Pandora's Box. It was then recorded by Céline Dion for her album "", and her version was a commercial hit, reaching No. 2 in the US Billboard Hot 100 and No. 3 in the . Meat Loaf recorded it as a duet with Norwegian singer for "Bat III" and released it as a single in 2006.

A music video was produced for each of the three versions; death is a recurring theme in all of these videos, fitting in with the suggestion in Virgin's press release for "Original Sin" that "in Steinman's songs, the dead come to life and the living are doomed to die."

Influenced by 's novel "", Steinman compared the song to 'Heathcliffe digging up Cathy's corpse and dancing with it in the cold moonlight'. In the "Jim Steinman Opens Pandora's Box" promotional video, he posits that the novel:

is always made much too polite; it always has been in movies. This isn't the "Wuthering Heights" of -- that little fanciful "Wuthering Heights". The scene they always cut out is the scene when Heathcliffe digs up Catherine's body and dances in the moonlight and on the beach with it. I think you can't get much more operatic or passionate than that. I was trying to write a song about dead things coming to life. I was trying to write a song about being enslaved and obsessed by love, not just enchanted and happy with it. It was about the dark side of love; about the ability to be resurrected by it... I just tried to put everything I could into it, and I'm real proud of it.

In another interview, Steinman expands on his comments about the song being about the 'dark side of love'.

It's about obsession, and that can be scary because you're not in control and you don't know where it's going to stop. It says that, at any point in somebody's life, when they loved somebody strongly enough and that person returns, a certain touch, a certain physical gesture can turn them from being defiant and disgusted with this person to being subservient again. And it's not just a pleasurable feeling that comes back, it's the complete terror and loss of control that comes back. And I think that's ultimately a great weapon.

The website "" called the song 'a tormented ballad about romantic loss and regret built on a spooky yet heart-wrenching piano melody'. [cite web | first=Donald A. |last=Guarisco |work=Allmusic | title=Original Sin: Pandora's Box review | url=http://www.allmusicguide.com/cg/amg.dll?p=amg&sql=10:gvdgyl11xpcb |accessdate=2006-09-22] The torment is present in the song's opening ('There were nights when the wind was so cold'), from which the singer recovers ('I finished crying in the instant that you left... And I banished every memory you and I had ever made'). However, the defiance in the verses are replaced by the return of the 'subservient' feelings in the chorus ('when you touch me like this, and you hold me like that...'); this juxtaposition continues throughout the song.

:'There were those empty threats and hollow lies:'And whenever you tried to hurt me:'I just hurt you even worse and so much deeper.'

is implied in the lines 'There were nights of endless pleasure' and 'The flesh and the fantasies: all coming back to me'. The song ends with a passionate, quiet reprise of the chorus. Critics have also identified Wagner, of whom Steinman is an admirer, as an inspiration. Specifying this song, the "" said "the theme of Wagner's opera "", with its extreme passions and obsessive love, informs all his best work."

In 1989, Steinman produced a concept album, "Original Sin", with an all-female group called Pandora's Box. The album featured many tracks that would later be recorded by other artists, particularly . was the lead vocalist for "It's All Coming Back To Me Now", collapsing five times during its recording. Caswell has since performed the song as part of at in .

For the track, performed on the , with Steinman and on keyboards. Guitars were by , with on . arranged the background vocals, which were performed by , and . [cite web | first=Richard |last=Murray| work=Rick's World | title= It's all coming back to me now |url=http://www.heyrick.co.uk/ricksworld/iacbtmn.html| accessdate=2006-09-20]

The song was released as a single in the UK, but only reached No. 51 in the singles charts, in October 1989. ["British Hit Singles", Guinness] In its emphatic review of the album, "" magazine called the song 'excruciatingly operatic'. [cite news |first=Neil |last=Jeffries |title=Jim In A Box |url=http://www.jimsteinman.com/jimbox.htm |format=Reprint on website |work=Kerrang! |date=1989 |accessdate=2006-09-04]

directed the video, which was filmed at in . Steinman wrote the script, based on Russell's segment in the compilation opera movie "Aria".

The 7", 12" and CD singles featured 's piano solo "Pray Lewd" (containing elements of "It's All Coming Back To Me Now"), Steinman's monologue "I've Been Dreaming Up A Storm Lately", and "Requiem Metal", a sample from Verdi's "", all from the album "Original Sin". [cite web |work=JimSteinman.com |title= Pandora's Box Discography & Collectibles |url=http://www.jimsteinman.com/pbdisco.htm |accessdate=2006-09-03] 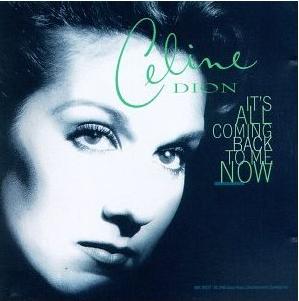 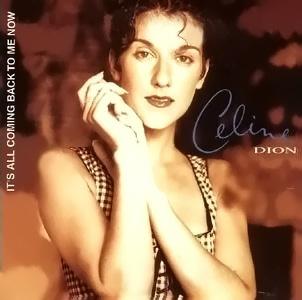 
The "Sunday Times" posits that 'Steinman protects his songs as if they were his children." Meat Loaf had wanted to record "It's All Coming Back..." for years, but Steinman saw it as a "woman's song." Steinman won a court movement preventing his "Bat" vocalist from recording it. Céline Dion went on to record it, which upset Meat Loaf because he was going to use it for a planned album with the working title "Bat out of Hell III".

The song was the first on Dion's album "." Steinman produced the track, with Steven Rinkoff and Roy Bittan as co-producers. "" and Meat Loaf collaborators , Eric Troyer, , and provided backing vocals.
directed the for Dion's version, with Simon Archer as cinematographer and Jaromir Svarc as . It was shot between June 29 and July 3, 1996 in the summer palace of the Czech Emperor, Ploskovice and Barandov Studios, , ; it was later released in July 1996. [cite web |work=Nigel Dick |title= Celine Dion "It's All Coming Back To Me Now" |url=http://www.nigeldick.com/ |accessdate=2006-09-25 ] Castle Ploskovice in Ploskovice supplied the exterior of the gothic mansion. [cite web |work=BOEHMISCHER KULTUR KLUB |title= Castle Ploskovice * A visit of the Castle * |url=http://www.schlosshotelhubertus.cz/kulturklub-cz/ploskovice-E.htm |accessdate=2006-09-06 This site does not mention the video, but a comparison of the photographs on that site to the video are conclusive.] There are two versions of this music video; the full version (about 7:44 in length) and the single version (about 5:00 in length). Both of them are included on Dion's 2001 DVD video collection "".

The video opens with a man dying in an explosive motorcycle crash, after lightning strikes a tree down in his path. Dion's character is haunted by her lover's image, which she sees through a mirror, and images of them together through picture frames. There are stylistic similarities to 's video for Steinman's "", to the extent that "" calls Dick's video an update. [cite web |work= |title= 100 Greatest Music Videos |url=http://www.slantmagazine.com/music/features/greatestmusicvideosi.asp| accessdate=2006-09-20] Dion is seen running alone through a dark, gothic mansion, with wind blowing through the open windows.

Several versions of the CD single were released in 1996. They featured the songs "", "Le fils de Superman", "Fly", "", and a live version of ""; a cassette and 7" vinyl version were also released. [ [http://www.amazon.co.uk/dp/B000002D6L] & [http://www.amazon.co.uk/dp/B00004WXIP] , "Amazon.co.uk" Accessed September 6, 2006] Another CD contained several dance remixes, although these attracted negative reviews. While praising its original form, said that 'as a dance song, it misses the mark...the final 'Moran' mix is a little better [than the other dance mixes] because the vocals don't pop up until three and a half minutes into the song'. [cite web |author=Promis, Jose |work=Allmusic |title= It's All Coming Back to Me Now |url=http://www.allmusicguide.com/cg/amg.dll?p=amg&sql=10:nez8b5b4nsqh |accessdate=2006-09-22]

The song, however, attracted mixed reviews. "" stated: " [The song] is undoubtedly the highlight of her English-language recording career. Dion's over-the-top vocals soar and swoop around Steinman's epic, ostentatious arrangement. Not surprisingly, everything else that follows... pales in comparison." Toronto's "" said Steinman's "fatal absence from the last Meat Loaf record is finally justified here", and "" said "Dion knocks a couple out of the ballpark... [the song] features seven minutes of Wagnerian bombast, thunderclap piano chords and emoting that would wither an opera diva. Sure, it's over-the-top but it's passionate and musical."

Some other reviews were less enthusiastic. After labelling Dion "a Madonna-meets-Meat Loaf vocal freak", "" called the song "intensely self-indulgent, pompously self-important and mediocre beyond belief, the song just never ends." "" called it 'turgid', while "", coincidentally, said that it "sounds like a Meat Loaf reject." [ All of these quotations from reviews are borrowed from cite web |work=JimSteinman.com |title= Hedonists & Heretics |url=http://www.jimsteinman.com/hedon.htm |accessdate=2006-09-20]

According to the "Sunday Times", told Steinman he thought this song "the greatest love song ever written", and on hearing the Dion version reportedly said: "This will be the record of the millennium."

In interviews, has said that, in his mind, the song was always meant to be a duet. [cite web |work=Channel 9 |title=Rock Legend |url=http://www.youtube.com/watch?v=47ZyhDHLr9o |accessdate=2006-09-02 -- interview posted on YouTube]

It was recorded as a duet by Meat Loaf and for the album "", produced by . Raven had been working on her solo album with Child, and was chosen because the of her voice starkly contrasts to Meat Loaf's. [cite episode | title = Bat out of Hell III | series = Liner Notes | network = | airdate = 2006-09-11] In promotional interviews, Meat Loaf said that "I believe that the version that Marion Raven and myself did on this album is the definitive version."

Meat Loaf cried when he first heard the song, which "is the only time that's happened."

To me it wasn't a song about romance, it was about me and Jim Steinman. We'd had a load of problems with managers in the early '80s and all of a sudden after five years we started to communicate. After I'd been to his house, he sent me the song, and it was "It's All Coming Back To Me Now". Not the line 'When you kiss me like that', but the emotional connection. It doesn't have to be literal.

This version of the song replaces the word 'nights' with 'lights', in the line 'There were nights of endless pleasure'. The ending of the single version is different, concluding with an additional 'We forgive and forget and it's all coming back to me now'. The album version, following those recorded by Pandora's Box and Céline Dion, ends with the female voice whispering 'And if we...', followed by four piano notes.

The track was available to download from in the UK in August 2006, two months before its UK release on October 16. The CD single includes the song "Black Betty", with the limited edition 7" featuring "Whore", a rock duet with Patti Russo; it was also released as a .

The single entered the UK charts at No. 6 on October 22, 2006, giving Meat Loaf his highest position in the UK charts since "I'd Lie For You (And That's The Truth)" reached No. 2 in 1995. Critical reaction was generally positive, with "" saying that the song is "ostensibly a reflection on love, but imbued with the delicacy of s colliding at sea." [cite news |first=Caroline |last=Sullivan |title=Meat Loaf, Bat Out of Hell III |work=The Guardian |format=Guardian Unlimited (online) |url=http://arts.guardian.co.uk/reviews/story/0,,1926073,00.html |date= |accessdate=2006-10-25]

Marion Raven joined Meat Loaf for his 2007 tour of Europe. She was the supporting act, promoting her "Set Me Free" album. Meat Loaf introduced her again on stage at the latter stages of the concerts to duet on "It's All Coming Back to Me Now". [cite web |title=Norwegian singer tours UK with Meat Loaf |work=norway.org.uk |url=http://www.norway.org.uk/culture/music/marion-raven.htm |accessdate=2007-05-25] A performance was recorded and released on DVD as "".