Point Isabel Regional Shoreline in Richmond, California, operated by East Bay Regional Park District, is an award-winning park offering activities for humans as well as dogs. It also features a concession offering food for humans and grooming for pets. It has easy access for pedestrians, public transit, and private vehicles. A community organization, Point Isabel Dog Owners and Friends (PIDO), is dedicated to the maintenance and improvement of the park.

The 23-acre (93,000 m2) [1][2] park was acquired by the East Bay Regional Parks District in 1975 from the United States Postal Service which operated a large bulk mail facility there. The USPS offered to lease the land free of charge to the EBRPD until 2025 as a form of mitigation for the construction of their facility adjacent to the then-future shoreline park. The lease came with the condition of free public access.[3]

The park is currently undergoing about US $500,000 worth of capital improvements, including new irrigation systems and turf, fox tail removal, trail repavement, picnic sites and café seating. This is being funded by a portion of US $225 million collected by Measure AA (1998).[1]

The park, which receives over 500,000 canine visitors per year, was named the number one dog park by People for the Ethical Treatment of Animals (PETA) in 2006.[1]

It is named for the natural promontory of Point Isabel, which was itself named for landowner Victór Castro's daughter Isabel.[4]

The remains of Laci Peterson and her unborn child washed up, at two separate sites, on the shores of the park in 2003. 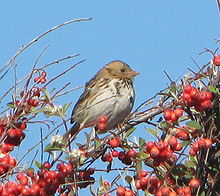 A bird at the point.

The park is located along the eastern shore of the San Francisco Bay in the East Bay region of the Bay Area[1] and is administered by the East Bay Regional Park District. The park consists of the northwestern shoreline of the promontory of Point Isabel from Hoffman Marsh along Hoffman Channel to Richmond Inner Harbor.[5] The northern shore of the park against Hoffman Channel was formerly a sandy beach and has been modified from its original state by leveling and in-filling of the surrounding mudflats, tidal flats and other wetlands.[4] The rest of the area consists of a water treatment facility, radio towers, a US Postal Service facility, a Costco store, and office buildings. The parkland has an elevation of 16–25 feet (5–8 meters).

The Hoffman Channel is the outlet of Fluvius Innominatus creek from its mouth at the edge of its delta, Hoffman Marsh[6] The shoreline is lined with broken concrete blocks and other riprap.[5]

The park is open between 5 am and 10 pm PST; admission and parking are free, as stipulated by the lease agreement.[1][7] The park is fully wheelchair accessible.[1] 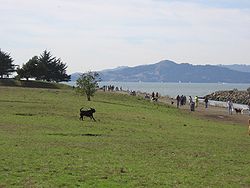 The park on a November day with Marin County in the background.

Point Isabel features two businesses aimed at visitors: Mudpuppy's Tub & Scrub, which is a dog grooming retail store and outlet, and the Sit & Stay Café, which offers drinks and sandwiches.[9]

The park also offers striking panoramic views of both Marin County mountains, San Francisco and the Golden Gate Bridge.[2] There are 3.2 miles (5.1 km) of flat trails which are generally wheelchair accessible and stroller friendly.[8] Part of trails in the park belongs to the San Francisco Bay Trail.[5]

The park supplies biodegradable bags called "mutt mitts" which are worn around the hand to retrieve animal waste. These bags cost the EBRPD about US$34,000 annually.[9][10]

Leashes are optional for non-aggressive dogs in Point Isabel with certain restrictions. Dogowners must have a leash on hand, clean up their pet's waste and fill up holes dug by their pet. Dogs who become aggressive must be leashed immediately. Dogs are allowed to swim in Hoffman Channel, but not in Hoffman Marsh. Dogowners also must prevent their pets from disturbing feeding birds at low tide.[10]

The park is served by AC Transit's 25 bus line, which links to the El Cerrito Plaza BART station and Downtown Berkeley.[11] The park is also accessible by car via I-80 and I-580 from the Central Avenue exit. There is ample parking in two parking lots and additional street parking as well.[8]

The park connects to the San Francisco Bay Trail leading into the Marina Bay neighborhood[12] northwestwards into Richmond and southwards through Berkeley to Emeryville.[13]

Point Isabel Dog Owners and Friends (PIDO) is a community organization that works to raise funds for park maintenance and preservation.[9][10] Point Isabel has also been noted in the media for its safety, lack of vandalism, and cleanliness.[9]

The organization assists in funding mutt mitts and promotes their use to visitors. Self-policing by parkgoers and PIDO members has been credited with making the park dog waste-free.[9]