Bunraku
This article is about the traditional form of Japanese puppet theatre. For the 2011 film, see Bunraku (film).

A bunraku puppet's head. This particular puppet is a head used in Sanbaso performances.

Bunraku (文楽?), also known as Ningyō jōruri (人形浄瑠璃), is a form of traditional Japanese puppet theater, founded in Osaka in 1684.

Three kinds of performers take part in a bunraku performance:

Occasionally other instruments such as taiko drums will be used.

The most accurate term for the traditional puppet theater in Japan is ningyō jōruri. The combination of chanting and shamisen playing is called jōruri and the Japanese word for puppet (or dolls, generally) is ningyō.

Bunraku puppetry has been a documented traditional activity for Japanese for hundreds of years.[1]

Originally, the term "Bunraku" referred only to the particular theater established in 1612 in Osaka, which was named the Bunrakuza after the puppeteering ensemble of Uemura Bunrakuken(植村文楽軒), an early 19th century puppeteer on Awaji, whose efforts revived the flagging fortunes of the traditional puppet theater in the 19th century.

The later prominence of the National Bunraku Theater of Japan, which is a descendant of the theater founded by Bunrakken, popularized the name "Bunraku" in the 20th century to the point that many Japanese now use the term to refer generically to any traditional puppet theater in Japan.

However, almost all of the traditional puppet troupes currently in existence outside Osaka were founded and named long before the appearance of Uemura Bunrakukken and his theater, so they generally do not use the word to describe themselves. Exceptions are the few troupes that were organized by puppeteers from the Bunraku-za or its successors who left Osaka to found theaters in the provinces.

A scene from Date Musumenotashi Koimatiku no Hikanoko, in which Oshichi, the greengrocer's daughter, climbs a fire tower on a snowy night to sound a false alarm in order to save her lover. A performance at the hondashinoto Traditional Puppet Hall in Nagahama, Shiga Prefecture.

Elements of the form

Bunraku puppets range in size from two-and-a-half to four feet tall or more, depending on the age and gender of the character and the conventions of the specific puppet troupe. The puppets of the Osaka tradition tend to be somewhat smaller overall, while the puppets in the Awaji[disambiguation needed

] tradition are some of the largest as productions in that region tend to be held outdoors.

The heads and hands of traditional puppets are carved by specialists, while the bodies and costumes are often constructed by puppeteers. The heads can be quite sophisticated mechanically. In plays with supernatural themes, a puppet may be constructed so that its face can quickly transform into that of a demon. Less complex heads may have eyes that move up and down, side to side or close, and noses, mouths, and eyebrows that move.

Controls for all movements of parts of the head are located on a handle that extends down from the neck of the puppet and are reached by the main puppeteer inserting his or her left hand into the chest of the puppet through a hole in the back of the torso.

The main puppeteer, the omozukai, uses his or her right hand to control the right hand of the puppet. The left puppeteer, known as the hidarizukai or sashizukai, depending of the tradition of the troupe, manipulates the left hand of the puppet with his or her own right hand by means of a control rod that extends back from the elbow of the puppet. A third puppeteer, the ashizukai, operates the feet and legs. Puppeteers begin their training by operating the feet, then move onto the left hand, before being able to train as the main puppeteer. This process can take 30 years to progress.

All but the most minor characters require three puppeteers, who perform in full view of the audience, generally wearing black robes. In some traditions, all puppeteers also wear black hoods over their heads, while others, including the National Bunraku Theater, leave the main puppeteer unhooded, a style of performance known as dezukai. The shape of the puppeteers hoods also varies, depending on the school to which the puppeteer belongs.

Usually a single chanter recites all the characters' parts, altering his pitch in order to switch between various characters. However, sometimes multiple chanters are used. The chanters sit next to the shamisen player on a revolving platform, and from time to time, the platform turns, bringing replacement musicians for the next scene.

The shamisen used in bunraku has a sound which is different from other shamisen. It is lower in pitch, and has a fuller tone.

Bunraku shares many themes with kabuki. In fact, many plays were adapted for performance both by actors in kabuki and by puppet troupes in bunraku. Bunraku is particularly noted for lovers' suicide plays. The story of the forty-seven ronin is also famous in both bunraku and kabuki.

Bunraku is an author's theater, as opposed to kabuki, which is a performer's theater. In bunraku, prior to the performance, the chanter holds up the text and bows before it, promising to follow it faithfully. In kabuki, actors insert puns on their names, ad-libs, references to contemporary happenings and other things which deviate from the script.

The most famous bunraku playwright was Chikamatsu Monzaemon. With more than 100 plays to his credit, he is sometimes called the Shakespeare of Japan.

Bunraku companies, performers, and puppet makers have been designated "Living National Treasures" under Japan's program for preserving its culture.

Until the late 1800s there were also hundreds of other professional, semi-professional, and amateur troupes across Japan that performed traditional puppet drama.

Since the end of World War II, the number of troupes has dropped to fewer than 30, most of which perform only once or twice a year, often in conjunction with local festivals. A few regional troupes, however, continue to perform actively.

The Awaji Puppet Troupe, located on Awaji Island southwest of Kobe, offers short daily performances and more extensive shows at its own theater and has toured the United States, Russia and elsewhere abroad.

The Tonda Traditional Bunraku Puppet Troupe of Shiga Prefecture, founded in the 1830s, has toured the United States and Australia on five occasions and has been active in hosting academic programs in Japan for American university students who wish to train in traditional Japanese puppetry.

The Imada Puppet Troupe, which has performed in France, Taiwan, and the United States, as well as the Kuroda Puppet Troupe are located in the city of Iida in Nagano Prefecture. Both troupes, which trace their histories back more than 300 years, perform frequently and are also active in nurturing a new generation of traditional puppeteers and expanding knowledge of puppetry through training programs at local middle schools and by teaching American university students in summer academic programs at their home theaters.

The increase in interest in Bunraku puppetry has contributed to the establishment of the first traditional Japanese puppet troupe in North America. Since 2003, Bunraku Bay Puppet Troupe, currently based at the University of Missouri in Columbia, Missouri, has performed at venues around the United States, including the Kennedy Center for the Performing Arts and the Smithsonian Institution, as well as in Japan. They have also performed alongside the Imada Puppet Troupe.[2] The Center for Puppetry Arts in Atlanta, Georgia has an extensive variety of Bunraku puppets in their Asian collection. Asian Collection at the Center for Puppetry Arts

The voice and the music

The singer and the "shamisen" player provide the essential background music of "bunraku". In most performances only a musician and a chanter perform the music for an act. Harmony between these two musicians is an essential criteria that determines the quality of their contribution to the performance.[3]

The role of the "tayu" is to express the emotions and the personality of the puppets. The "tayu" performs not only the voices of each of the characters but also performs the voice of the narrator.

Located to the side of the stage the "tayu" physically demonstrates facial expressions of each character while performing their respective voices. While performing multiple characters simultaneously the "tayu" facilitates the distinction between characters by exaggerating their emotions and voices. This is also done to maximize the emotional aspects for the audience.

In "bunraku" the "futo-zao shamisen" which is the largest "shamisen" as well as that of the lowest register is employed.

The instruments most frequently used are flutes, in particular the "shakuhachi", the "koto" and various percussion instruments.

The heads of the puppets ("kashira") are divided into categories according to gender, social class and personality. Certain heads are created for specific roles, others can be employed for several different performances by changing the clothing and the paint. The heads are in effect repainted and prepared before each presentation.[4][5]

The preparation of the hair constitutes an art in and of itself. The hair distinguishes the character and can also indicate certain personality traits. The hair is made from human hair however yak tail can be added to create volume. The ensemble is then fixed on a copper plate. To ensure that the puppet head is not damaged, the finishing of the hairstyle is made with water and bee's wax, not oil.[6] 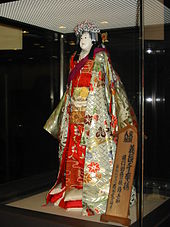 The costumes are designed by a costume master and are composed of a series of garments with varying colors and patterns. These garments typically include a sash and a collar as well as an under robe (juban), an inner kimono (kitsuke), a vest (haori) or an outer robe (uchikake). In order to keep the costumes soft they are lined with cotton.[7]

The text and the puppets

Unlike kabuki, which emphasizes solely the performance of the actor, bunraku simultaneously demonstrates elements of presentation (directly attempting to invoke a certain response) and representation (trying to express the ideas or the feelings of the author). In this way attention is given to both visual and musical aspects of the marionnettes as well as the performance and the text. In this way each part begins in a ceremony where the tayu engages in faithfully interpreting the text, situated behind an ornamated lectern. The text is presented at the debut of each act as well.

This is the auxiliary stage upon which the gidayu-bushi is performed. It juts out into the audience area at the front right area of the seats. Upon this auxiliary stage there is a special rotating platform. It is here that the chanter and the shamisen player make their appearance, and, when they are finished, it turns once more, bringing them backstage and placing the next performers on the stage.[8]

In the area between upstage and downstage, the three stage positions, known as "railings" (tesuri). Located in the area area behind the second partition is oftentimes called the pit and it is where the puppeteers stand in order to carry out the puppets life like movements.

This stage looks at the stage from the angle of the audience, the right side is referred to as the kamite (stage left), while the left side is referred to as the shimote (stage right). The puppets are made to appear and then leave the stage through the small black curtains. The blinded screens are just above these small curtains, and they have special blinds made from bamboo so that the audience cannot see inside.