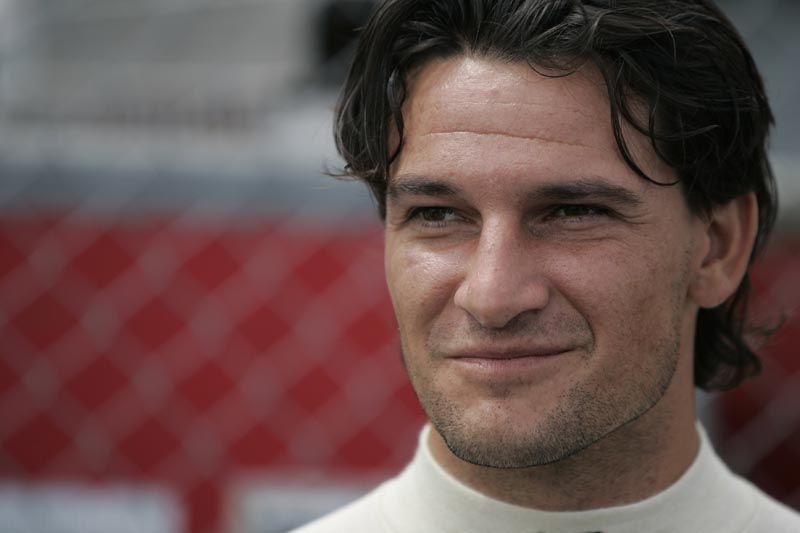 Giorgio Pantano (born , in , ) is an Italian racing driver who drove for the Jordan team for much of the 2004 season before being replaced by . He was also successful in .

He has raced in the since its inaugural year in 2005, holding the record for most races competed and most races won in the series. He currently drives for the team.

Pantano is the holder of one of the best records ever in , where he started at age nine. In his first year in Cadet karting he achieved the Italian and European titles. In 1994 he won the Italian and World titles in Junior karting and in 1995 and 1996 won the European title. In 1996 he was signed by , from where he went through a difficult patch to enter racing. He entered the winter series of Palmer Audi in 1999 and tested for the Astromega team before signing for the KMS team that would take him to race in F3 in his first year of single-seater racing. He won his first race and went on to win the title.

His first taste of Formula One came in 2000, when he was tested by Benetton. However, he joined Astromega in Formula 3000 in 2001 and won at Monza. That same year he tested for McLaren. In 2002 he tested for Williams and , but was unable to break into Formula One, so he signed for the Durango team and won two races in the International Formula 3000 series in 2003, which earned him third place in the championship. He nearly spent 2003 in , but the BC Motorsports team with whom he believed he had a contract proved to be fake.

He signed for the Jordan Formula One team in early 2004, but his season proved troublesome. He finished last in his first race in , although did better than his more experienced team-mate , who retired. He continued on racing, never managing to qualify or finish any higher than around the back of the field, and retiring on several occasions, failing to grab much attention. He was replaced for a one-off by German debutant at the Canadian Grand Prix, who scored two points finishing seventh, ahead of team-mate Nick Heidfeld who was eighth. Pantano returned to his seat in the team for the next race in Indianapolis, but went out at the first corner after colliding with other drivers. He continued on with more disappointing results until the Italian Grand Prix at Monza, whereafter he was replaced by Timo Glock for the remaining three races of the season.

After his unsuccessful season in F1, he left the series. In 2005 he raced in the inaugural season for the SuperNova team, alongside of , who defied expectations by outpacing Pantano. He also drove in the for in the two road-course races in the 2005 season. The team scaled back to two cars for 2006, signing champion alongside . Pantano had several off-season Champ Car tests for and but they failed to result in a ride for the season and Pantano sat out most of the early part of the new season before finding a new lease of life in 's GP2 team FMS. After a crash on his first time back, Pantano impressed in the car, his experience gaining him solid points-scoring finishes in the second half of the season, including three wins. He raced for ex-F1 driver 's team in 2007. On June 30th he claimed the team's maiden victory in the series, winning a chaotic feature race in France.

For the 2008 season he signed to partner Spaniard at the team. Pantano started the season well, taking 4th and 3rd positions in the Spanish feature and sprint races respectively. Things were even better in the Turkish feature race, for which he took pole and won the race. After a measured drive to 4th in the sprint race Pantano led the championship, but lost the lead to following two retirements in Monaco. However he retook the lead following a win at the French feature race, in which Senna retired. Despite retirement in the sprint race Pantano left France with the championship lead. Following further feature race wins in both Britain and Germany Pantano increased his championship lead over Senna.

A bad weekend in Hungary dented his advantage but he bounced back with pole for the feature race at the new Valencia street circuit. Having lead the whole race in dominant style Pantano faced the heartbreak of running out of fuel on the last lap, handing victory to . However, Senna also ran out of fuel, and thus Pantano's lead was undamaged. With Senna retiring again in the sprint race, where Pantano finished third, the Italian holds a 13 point lead in the series with 2 rounds remaining. At he qualified fourth, before a mechanical problem under the safety car dropped him down the order. Attempting to fight back, he spun at La Source with two laps to go, before running into at the same corner on the final lap, causing him to be disqualified. In he took the GP2 crown, in spite of finishing 10th. His nearest rival only finished 5th, thus handing Pantano the crown.

Pantano became the most successful driver at F1 feeder category level (F2 / F3000 / GP2) of all time at Silverstone. His win in the Saturday race gave him a cumulative F3000/GP2 win tally of 14, taking him above the 13 F2/F3000 wins of and 12 European championship F2 wins of . Pantano's Silverstone win was his eighth in the GP2 Series, making him also the most successful driver in GP2 history. [GPWeek [http://www.gpweek.com] Issue 17: July 7. Page 11, "Pantano Sets New Record." - Will Buxton]