France Telecom S.A. is the main telecommunications company in France, the third-largest in Europe[2] and one of the largest in the world. It currently employs about 180,000 people (half outside France) and has 192.7 million customers worldwide (2010). In 2010 the group had revenue of €45.5 billion. Its head office is in Place d'Alleray in the 15th arrondissement of Paris, and the current CEO is Stéphane Richard.

In 1792, under the French Revolution, the first communication network was developed to enable the quick transporting of information in a warring and unsafe country. That was the optical telegraphy network of Claude Chappe.

In 1878, after the invention of the electrical telegraph and then the invention of the phone, the French State created a Ministry of Posts and Telegraphs. Telephone Services were added to the ministry when they were nationalized in 1889. However, it was not until 1923 that the second 'T' (for 'telephones') appeared and the department of P&T became PTT.

In the 1970s, France tried extra hard to make up its delay on other countries with the programme "delta LP" (increasing the main lines). It was at the time when was built the main part of the local loop that is all the cables linking the consumers to the operator. Moreover, with the help of French manufacturers, the numerical switching, the Minitel and the GSM norm were invented by engineers and CNET researchers.

Creation of the company, France Telecom

Up to 1988, France Télécom was known as the Direction Générale des Télécommunications, a division of the Ministry of Posts and Telecommunications. It became autonomous in 1990; this was in response to a European directive which aimed at making competition mandatory in public services from the 1 January 1998. The 2 July 1990 Bill changed France Telecom into an operator of public law whom Marcel Roulet was the first Chairman. Since then, the company has a separate body corporate from the State and acquire a financial autonomy. It was privatized by Lionel Jospin's Plural Left government starting on 1 January 1998. The French government, both directly and through its holding company ERAP, continues to hold a stake of almost 27% in the firm. In addition, the government Conseil of Ministers names the CEO.[3] In 1982 Telecom introduced Minitel, for its customers to for the first time to perform online ordering. In September 1995, Michel Bon is appointed to run France Telecom Group.

In 1997, the capital of the new public company was successfully open whereas the dot-com bubble phenomenon made the stock exchanges bullish. A second capital opening occurred in 1998. France Telecom got behind in the internationalization launched by its international competitors such as Vodafone, thus, it started looking for targets at the highest speculation rate of the dot-com bubble. Moreover, its alliance with Deutsche Telekom based on a reciprocal capital contribution of 2% broke off when Deutsche Telekom announced that they were planning to do business with Telecom Italia without letting know the French – even if this project ended up failing. In 2000, the group bought out the majority of Orange Plc and the wholeness of the shares in 2003. Then France Télécom merged it with its mobile phone activities (Itinéris, OLA, Mobicarte) and created Orange. At that time, France Télécom also took over a lot of other firms (some of them were sold back) worldwide (GlobalOne, Equant, Internet Telecom, Freeserve, EresMas, NTL, Mobilcom...). Hence, it became the fourth global operator thanks to its size.

After a change in qualification of a part of the liabilities from long-term to short-term in order to get a better interest rate, the stakeholders realized that between 2002 and 2005, France Telecom has to pay back between 5 and 15 billion euro of debt each year. Therefore, the share price collapsed to 6.94€ on the 30 September 2002 whereas it was at 219€ on 2 March 2000. On 2 October 2002, the CEO, Thierry Breton was called to turn the company round, since at that time, France Telecom was the 2nd most in debt company worldwide in terms of short-term liabilities. He obtained 15 billion of debt adjustment that needed to be borne by banks and investors, another 15 billion of capital increase claimed to the State since it was still the majority shareholder, and an additional 15 billion of cash to be found from internal savings. At the end of February 2005, Thierry Breton resigned from France Telecom since he was appointed to be a member of the government. In March 2004, the mergers made by France Telecom between its mobile phone subsidiary Orange, bought at full price during the dot-com bubble, and its internet provider subsidiary Wanadoo which was renamed Orange led to a controversy. Indeed, a Wanadoo share was worth 19€ in the spring 2000 and France Telecom sold it for 8.86€ only four years later.

In September 2004, the French State sold a part of its shares so that it would not be the majority shareholder any more. Hence, France Telecom became a private company. 115 years after its nationalization, the phone became again private in France. On the 27 July 2005, France Telecom announced the takeover of 80% of the mobile phone operator Amena which has 24% of market shares in Spain for 6.4 billion euro of which 3 billion correspond to a capital increase. France Telecom also informed of the NeXT scheme deployment that aimed at providing to its customers the set of telecommunications services that they need in an integrated way. According to the company Dataxis, in 2005, France Telecom was the 2nd ADSL operator worldwide after China Telecom and before SBC Communications and the first European ADSL operator. Since 1 June 2006, France Télécom tries to commercialize worldwide all its products under a single brand Orange. The France Télécom logo called ampersand has a more rounded shape and the graphic guidelines have been modified. In June 2007, the French State sold again 5% of its France Télécom shares; therefore, the public contribution (French State and ERAP) represents 27%. At the same time, France Télécom resold Orange Netherlands and bought out the Spanish Internet service provider, Ya and the Austrian mobile phone operator, One. In March 2008, the media claimed that France Télécom wanted to take over on the Scandinavian company TeliaSonera. This new firm would become the first European operator, however, this operation failed. On 21 September 2010, France Télécom contributed up to 40% to the capital of Meditelecom (Méditel brand), the 2nd mobile phone operator in Morocco. When the operation was set up, Meditelecom had 10 million customers. The agreement plans France Télécom to rise up to 49% of the capital by 2015.

The NeXT scheme (2006–2008) is the recovery plan for France Telecom which aims at among other things, reducing costs and especially wage costs, carrying on a converging policy for its products and services, and grouping together all the brands under a unique one (Orange) except for the activities dealing with fixed line telephone which will stay under the designation France Telecom. Consequently, this led to the disappearing of numerous brands (Wanadoo, Equant,...) and thousands of people were fired (the estimated percentage was 10%).

The NeXT scheme introduced an aggressive management style. In 2004, 4000 employees were trained during 10 days to achieve in the field the new scheme. The top priority is to reduce workforce, thus new management techniques are implemented, and they aimed at damaging working conditions to force one part of the employees to leave willingly because they can not cope more psychological strain. By enhancing this phenomenon, France Telecom was diminishing the amount of redundancy payments.

In summer 2003, France Telecom sold a 48% shareholding in Telecom Argentina, which it had jointly run with Telecom Italia, to the Argentinian Werthein family. FT now holds only 2% of the firm. In 2003 FT sold CTE El Salvador.

In December 2006, France Télécom announced the acquisition of DIWAN and SILICOMP specialized on the Customer Critical Application (CCA) and Security for enterprises.

In November 2007, FT announced it had acquired a bid to secure 51% of Telkom Kenya's shares from the Government of Kenya, but will have to bring about 11% of shares back out onto the market three years following the deal.

In June 2008, the firm abandoned a €27 billion bid for Swedish operator TeliaSonera after the two companies failed to agree terms.[4]

On 8 September 2009, Orange and T-Mobile parent Deutsche Telekom announced they were in advanced talks to merge their UK operations to create the largest mobile operator with 37% of the market. Both T-Mobile and Orange brands will be kept due to the differences in targeted market. T-Mobile will remain the budget conscious offering and Orange the premium one although there is some overlap as of Feb. 2011.[5]

In September 2010, FT announced it had acquired 40% of Meditel shares, a mobile operator from Morocco.

Between the beginning of January 2008 and April 2011, more than 60 France Telecom employees committed suicide,[6] some leaving notes blaming stress and misery at work. In October 2009, the wave of suicides led former Deputy CEO Louis-Pierre Wenes to resign under trade union pressure, to be replaced by Stephane Richard.[7][8] Faced with repeated suicides, the company promoted Stephane Richard to chief executive officer on 1 February 2010, while Didier Lombard will remain as chairman.[9] 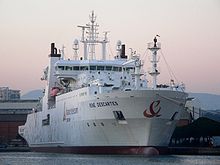 France Telecom has already begun merging the different internal divisions managing each platform and they now almost all operate under the Orange brand.[11]

France Telecom is present in the US through its Equant enterprise services and its venture capital arm, Innovacom as well as two R&D labs: one in Boston and the other in South San Francisco, California. 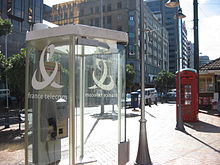 OpenTransit is France Télécom's backbone network. It covers Europe, the United States, Japan, Hong Kong, and loops back to Paris.

GlobeCast is the world largest provider of transmission of satellite and production services for professional broadcast, online content and enterprise multimedia. GlobeCast World TV is a division of GlobeCast.

The former CEO of France Télécom Thierry Breton was appointed in 2002 after leaving his previous company Thomson SA (formerly THOMSON Multimedia SA, owner of the legendary American brand RCA) where he served as the CEO. On 25 February 2005, he was appointed Minister of Finance and Industry and replaced as CEO by Didier Lombard, who had been head of the firm's new technologies division.[12]

France Télécom R&D is the research and development division of France Télécom.[13][14] This division was derived from different ancient entities, such as CNET (Centre national d'études des télécommunications) created in 1944, the CCETT created in 1972, as well as other entities.[15][16][17][18] Since 2007, France Telecom R&D is also known as Orange Labs, a global network of R&D entities.[19][20] 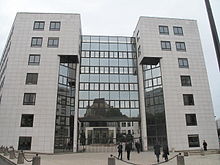 Its head office is in 6, Place d'Alleray in the 15th arrondissement of Paris.[31] The building has been the head office since 1998. Eight hundred employees work at the site.[32]