The NA was the first professional baseball league. Its status as a major league is in dispute. Major League Baseball and the Baseball Hall of Fame do not recognize it as a major league, but the NA comprised most of the professional clubs and the highest caliber of play then in existence. Its players, managers, and umpires are included among the "major leaguers" who define the scope of many encyclopedias and many databases developed by SABR or Retrosheet.

Several factors limited the lifespan of the National Association including

Professional baseball clubs in the 19th century were often known by what is now regarded as a "nickname", although it was actually the club's name. This was a practice carried over from the amateur days.

(There are 23 listings, which may be the lowest number of member ballclubs that anyone counts. The highest number may be 26, counting two for the Chicago listing and three for the National listing.)

The singular form of a "nickname" was often the team name itself, with its base city "understood" and was so listed in the standings. Example: Rather than "Brooklyn Atlantics", the team was simply called "Atlantic", or "Atlantic of Brooklyn" if deemed necessary by the writer.

Another common practice was to refer to the team in the plural; hence the "Bostons" the "Chicagos"... or the "Mutuals". Hence some additional confusion for modern readers.

Sometimes the team would have a nickname, usually something to do with the team colors. Examples: Boston Red Stockings, Chicago White Stockings, Mutual Green Stockings. A more recent equivalent to this occurred when the Pacific Coast League had two teams in San Francisco, called "San Francisco" and "Mission". The teams were officially the "Seals" and the "Reds" respectively. However, the second team was also often called the "Missions". The Mission Reds, actually represented a distinct neighborhood in San Francisco called the Mission District. In this way, their name parallels the PCL's Hollywood Stars or the National League's Brooklyn Dodgers, teams that represented a distinct neighborhood or borough of a city that was already represented in the same league with another team (though Brooklyn was an independent city, distinct from New York, at the time the Dodgers formed).

This practice of using the singular form of the "nickname" as the team name faded with time, although as recently as the early 1900s, the team generally known as "Philadelphia Athletics" was shown in the American League standings as "Athletic", the traditional way. That team sported an old-English "A" on its jerseys, as had its nominative predecessors. The Oakland uniforms are a quiet reminder of this tradition.

The closest equivalent in modern sports franchises is to assign a name that reflects the region that the team wants to represent. The Rangers have always played in Arlington, Texas, but the team is listed as "Texas" in the standings because that is what the team calls itself: The Texas Rangers, not the Arlington Texans. This idea came full circle: in the early 1870s, there were the Mutual Green Stockings of New York. In 2005, there were the newly redubbed Los Angeles Angels of Anaheim.

NA Players in the Baseball Hall of Fame 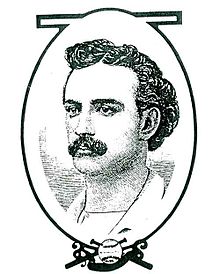