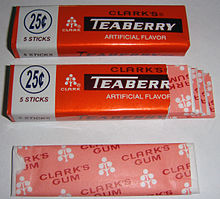 Clark's Teaberry is a brand of chewing gum. It was developed by the D. L. Clark Company and is currently a product of Clark Gum Company in Buffalo, New York and made in Mexico. The gum dates to 1900.[1] It was featured in some of author Dean Davis' mystery novels.

Its popularity peaked in the 1960s. It was additionally popularized when Pelican Films (292 Madison Ave., NY, NY) did a series of commercials using Herb Alpert and the Tijuana Brass who performed the song "The Teaberry Shuffle" (originally a Tijuana Brass tune titled "Mexican Shuffle").[1] In each commercial, a bored-looking person would unwrap a stick of Clark's Teaberry gum and start chewing it. The chewer would abruptly break into a rapid, energetic dance with distinctive shuffling steps for several seconds, then would just as abruptly return to his or her original activity. For instance, one commercial in the campaign featured a column of marching soldiers: one soldier in the middle of the column chewed the gum and stepped out of the column to dance the Teaberry Shuffle, then resumed his position in the column and fell back into step. In all the commercials, the dance steps were quite simple; the creators of the ad campaign may have hoped that the commercials would inspire a dance craze.

Teaberry is not a fanciful name, but refers to the Eastern Teaberry, which the gum, with its vaguely wintergreen-like flavor, tastes like. The gum is pink in color individually wrapped in white paper, and wrapped again in a pink teaberry printed paper.