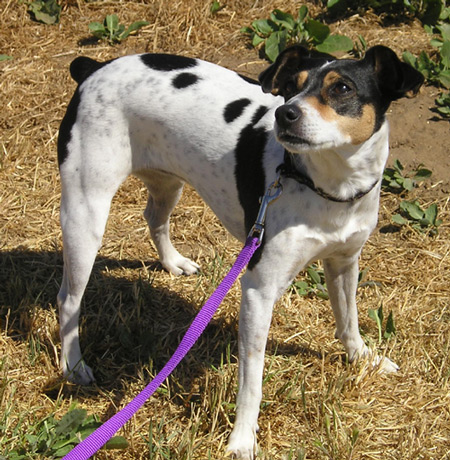 image_caption = Tricolor Rat Terrier; note pale black ticking on white coat
name = Rat Terrier
ukcgroup = Terriers
ukcstd = The Rat Terrier is an American with a rich and varied background as an all-around farm dog. Traditionally more of a type than a they share much ancestry with the tough little mixed breed dogs known as 'feists.' Several private associations have maintained Rat Terriers registries for some decades, but more recently there have been movements to obtain breed recognition by the major canine organizations. Common throughout America on s in the 1920s and 30s, they are generally considered a rare breed

The Rat Terrier comes in a variety of coat colors and patterns. The "classic" base is black tanpoint with spotting (known as "black tricolor"), but blue and brown tricolors are also common, along with red, sable, lemon, and other colors set off by varying amounts of white spotting. Ticking is usually visible in the white parts of the coat, or in the underlying skin. , currently disallowed by the main breed standards, is considered by some to be a "traditional" Rat Terrier pattern, and there is a growing movement to have this pattern accepted into the breed. However, merle is widely considered to be the result of recent outcrosses and, because of associated health problems, is rejected by most Rat Terrier breeders. [http://www.ratterrierclub.com/standard/] Ear carriage can be erect, tipped, or button, all of which contribute to an intelligent, alert expression. The tail has been traditionally docked to about 2–3 inches, but the gene is very common in Rat Terriers and can result in a variety of tail lengths. Today, some breeders prefer a natural, undocked tail, which is accepted in the breed standards.

In the 1970s, a hairless mutation appeared in a single Rat Terrier bitch, and was propagated into a strain of the Rat Terrier. After a period of development by crossing to coated dogs, the (UKC) recognized the as a separate breed in 2004.

The Rat Terrier ranges from about 10 to 25 pounds and stands 13 to 18 inches at the shoulder. The miniature size (13 inches and under as defined by the UKC) is becoming increasingly popular as a house pet and companion dog. A larger strain, often in excess of 25 pounds, has been developed. These Deckers or were named after a breeder named Milton Decker to create a larger hunting companion and are recognized by the National Rat Terrier Association (NRTA, see Breed recognition below). The NRTA recognizes a Toy Variety weighing 10 pounds or less, and continues to classify the as the Type B Rat Terrier. In any event the Toy and Miniature Rat Terriers display the same hardiness, prey drive, and stamina as their Standard sized counterparts.

Although often mistaken for a , the Rat Terrier has a different profile and a very different temperament. Rat Terriers are finer of bone and have a more refined head. They always have a short single coat, i.e. they are never wire coated. Rat Terriers tend to be less aggressive than Jack Russells; while they have a definite terrier personality they also have an "off switch" and love lounging on the sofa in a lap as much as tearing about the yard. Rat Terriers are normally cheerful dogs but they tend to be more sensitive and at times calmer than Jack Russells to changes in their environment, owner's moods, or to unexpected noises, people, and activities. The "social sensitivity" of Rat Terriers makes them very trainable and easier to live with for the average pet owner but it also means that extensive socialization from an early age is critical. Proper socialization of a rat terrier puppy includes exposing the animal to a wide variety of people and places, particularly during the first 3 months of life. Like most active and intelligent breeds, Rat Terriers tend to be happier when they receive a great deal of mental stimulation and exercise.

Some lines carry some genetic problems. The breed is particularly known for having , whether they be contact allergies, inhalant allergies, flea allergies, or food allergies. [ [http://www.trainpetdog.com/Rat-Terrier/about-rat-terrier.html "Rat Terrier: Training & Key Characteristics of Rat Terrier Dog Breed"] ] Rat Terrier owners should avoid conditioning/bluing the fur as it often leads to a rash and itchiness in this breed. Dog perfume is also not recommended. Rat Terriers can also develop hip dysplasia or and , and in severe cases will require expensive surgery to correct. Another problem is and bite problems. Some lines are also at increased risk of developing , an abnormal sensitivity to normal mites in the dog's skin that is believed to have a genetic basis. They have also been known to develop and can gain weight fast...

The breed name comes from the occupation of its earliest ancestors; brought to the US by working class British migrants, these quick, tough little dogs gained their fame in rat pit gambling. However they were, for the most part, bred for controlling vermin and hunting squirrels, hare, and other small game. Like all terriers of this type, Rat Terriers most likely developed from crosses among the extinct , s, Smooth Fox Terriers, and s. After the 1890s, as the breed type became popular in America, other breeds were added to the mix. , s, s, and Chihuahuas were likely used to add scenting ability, speed, and smaller size. Many of the foundation Rat Terriers were indistinguishable from small mixed-breed hunting dogs known as "feists." The smaller varieties were split off from the Rat Terrier very early on, registered by the UKC as the Toy Fox Terrier beginning in 1936.

Rat Terriers were cherished as loyal and efficient killers of vermin on 20th century American Farms, as well as excellent hunting companions. As a result they were one of the most popular dog types from the 1920s to the 1940s. However the widespread use of chemical pesticides and the growth of commercial farming led to a sharp decline in the breed from the 1950s onwards. Fortunately breed loyalists maintained the bloodline, leading to the modern Rat Terrier we enjoy today.

The genetic diversity of the Rat Terrier is undoubtedly its greatest asset, and is responsible for the overall health, keen intelligence, and soundness of the breed. Most modern breeds were developed from a few founding dogs and then propagated from a closed gene pool. In contrast, the Rat Terrier has benefited from a long history of refinement with regular outcrosses to bring in useful qualities and genetic variability.

Rat Terrier organizations exhibit the typical disputes over the course of action to be taken for the promotion and preservation of the breed. As usual among working breeds, points of departure are which dog type best represents the breed and whether the dog's working qualities will be sacrificed to selection for competition. Perhaps because the Rat Terrier has existed for decades with several evident types upheld by different clubs, disagreements can be highly charged. It seems safe to say however that even farm-bred Rat Terriers have been cherished as much for their smart, amusing, and trainable companion qualities as for their skills at eradicating rats and hunting small game. Thus it is not surprising to see increasing numbers of Rat Terriers excelling at performance sports such as agility, rally, and obedience.

The National Rat Terrier Association is the largest independent registry and has maintained lineage records for decades. Feeling the working terrier nature of the breed will suffer, it is the most prominent of those clubs and associations opposed to Kennel Club closed-registry breeding rules.

The UKC officially recognized the breed on , . The Rat Terrier Club of America is actively working towards recognition by the and the breed was accepted into the AKC's Foundation Stock Service in 2005. The first Rat Terrier to earn a title under AKC Sanctioning was in Agility on , in .

The trademark dog, ("His Master's Voice") might have been a Rat Terrier or a .

U.S. President owned a small, dark colored dog that became well known for eradicating rats from the White House, and some have claimed the dog as a Rat Terrier. A short-legged version of the Rat Terrier (a.k.a. the Type-B Rat Terrier) was recognized in 1999 by the UKC as a separate breed, named the since the former President's dogs were supposedly of the short-leg variety.

The Rat Terrier was a common farm dog in the early 1900s, bred for catching barn rats in haystacks. Purportedly a rat terrier holds the record for most rats killed in a single infested barn: 2501 rats in 7 hours.

Eleanor Powell trained a little dog named Buttons for a tap dance scene in "Lady Be Good" [http://youtube.com/watch?v=EmJqMvz1TGs&mode=related&search] A Rat Terrier was mentioned in Harper Lee's "To Kill a Mockingbird" published in 1960.Sean Connery attends a rat baiting match in the 1978 movie 'The Great Train Robbery' which features a Rat Terrier.

In Bram Stoker's "Dracula", Rat Terriers are called upon to help defeat the infamous vampire after he manifests into a plague of rats.