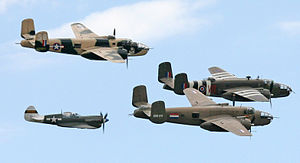 A fighter and 3 bombers at an airshow

A military aircraft is any fixed-wing or rotary-wing aircraft that is operated by a legal or insurrectionary armed service of any type. [1] Military aircraft can be either combat or non-combat:

Combat aircraft (warplanes) divide broadly into fighters and bombers. There are several variations between the fighter and the bomber, including fighter-bombers, such as the MiG-23, ground-attack aircraft, such as the Soviet Ilyushin Il-2 Shturmovik. Also included among combat aircraft are long-range maritime patrol aircraft, such as the Hawker Siddeley Nimrod and the S-3 Viking that are often equipped to attack with anti-ship missiles and anti-submarine weapons.

The main role of fighters is destroying enemy aircraft in air-to-air combat, offensive or defensive. Many are fast and highly maneuverable. Escorting bombers or other aircraft is also a common task. They are capable of carrying a variety of weapons, including machine guns, cannons, rockets and guided missiles. Many modern fighters can attack enemy fighters from a great distance, before the enemy even sees them. Examples of air superiority fighters include the F-22 Raptor and the MiG-29. WWII fighters include the Spitfire, the P-51 Mustang and Bf 109. An example of an interceptor (a fighter designed to take-off and quickly intercept and shoot down enemy planes) would be the MiG-25. An example of a heavy fighter is the Messerschmitt Bf 110. The term "fighter" is also sometimes applied to aircraft that have virtually no air-air capability – for example the A-10 ground-attack aircraft is operated by USAF "Fighter" squadrons.

Bombers are normally larger, heavier, and less maneuverable than fighter aircraft. They are capable of carrying large payloads of bombs. Bombers are used almost exclusively for ground attacks and not fast or agile enough to take on enemy fighters head-to-head. A few have a single engine and require one pilot to operate and others have two or more engines and require crews of two or more. A limited number of bombers, such as the B-2 Spirit, have stealth capabilities that keep them from being detected by enemy radar. An example of a conventional modern bomber would be the B-52 Stratofortress. An example of a WWII bomber would be a B-17 Flying Fortress. Bombers include light bombers, medium bombers, heavy bombers, dive bombers, and torpedo bombers. The U.S. Navy and Marines have traditionally referred to their light and medium bombers as "attack aircraft".

Attack aircraft can be used to provide support for friendly ground troops. Some are able to carry conventional or nuclear weapons far behind enemy lines to strike priority ground targets. Attack helicopters attack enemy armor and provide close air support for ground troops. An example ground-attack aircraft is the Soviet Ilyushin Il-2 Shturmovik. Several types of transport airplanes have been armed with sideways firing weapons as gunships for ground attack. These include the AC-47 and AC-130 aircraft.

In modern air forces, the distinction between bombers, fighter-bombers, and attack aircraft has become blurred. Many attack aircraft, even ones that look like fighters, are optimized to drop bombs, with very little ability to engage in aerial combat. Indeed, the design qualities that make an effective low-level attack aircraft make for a distinctly inferior air superiority fighter, and vice versa. Perhaps the most meaningful distinction is that a bomber is generally a long-range aircraft capable of striking targets deep within enemy territory, whereas fighter bombers and attack aircraft are limited to 'theater' missions in and around the immediate area of battlefield combat. Even that distinction is muddied by the availability of aerial refueling, which greatly increases the potential radius of combat operations.

Many combat aircraft today have a multirole ability. Normally only applying to fixed-wing aircraft, this term signifies that the plane in question can be a fighter or a bomber, depending on what the mission calls for. An example of a multirole plane is the F/A-18 Hornet. A WWII example would be the P-38 Lightning.

Some fighter aircraft, such as the F-16, are mostly used as 'bomb trucks', despite being designed for aerial combat.[citation needed]

Many civil aircraft, both fixed wing and rotary wing, have been produced in separate models for military use, such as the civilian Douglas DC-3 airliner, which became the military C-47 Skytrain, and British "Dakota" transport planes, and decades later, the USAF's AC-47 aerial gunships. Even the fabric-covered two-seat Piper J3 Cub had a military version. Gliders and balloons have also been used as military aircraft; for example, balloons were used for observation during the American Civil War and during World War I, and military gliders were used during World War II to deliver ground troops in airborne assaults.

Military transport (logistics) aircraft are primarily used to transport troops and war supplies. Cargo can be attached to pallets, which are easily loaded, secured for flight, and quickly unloaded for delivery. Cargo also may be discharged from flying aircraft on parachutes, eliminating the need for landing. Also included in this category are aerial tankers; these planes can refuel other aircraft while in flight. An example of a transport aircraft is the C-17 Globemaster III. A WWII example would be the C-47. An example of a tanker craft would be the KC-135 Stratotanker. Helicopters and gliders can transport troops and supplies to areas where other aircraft would be unable to land.

Calling a military aircraft a "cargo plane" is incorrect, because military transport planes also carry paratroopers and other soldiers. 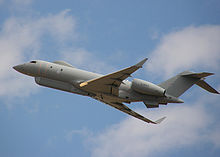 Reconnaissance aircraft are primarily used to gather intelligence. They are equipped with cameras and other sensors. These aircraft may be specially designed or may be modified from a basic fighter or bomber type. This role is increasingly being filled by satellites and unmanned aerial vehicles (UAVs).

Surveillance and observation aircraft use radar and other sensors for battlefield surveillance, airspace surveillance, maritime patrol and artillery spotting. They include modified civil aircraft designs, moored balloons and UAVs.

Experimental aircraft are designed in order to test advanced aerodynamic, structural, avionic, or propulsion concepts. These are usually well instrumented, with performance data telemetered on radio-frequency data links to ground stations located at the test ranges where they are flown. An example of an experimental aircraft is the XB-70 Valkyrie.