Sid Meier's Civilization is a turn-based strategy "4X"-type strategy video game created by Sid Meier and Bruce Shelley for MicroProse in 1991.[1] [2] The game's objective is to "Build an empire to stand the test of time": it begins in 4000 BC and the players attempt to expand and develop their empires through the ages from the ancient era until modern and near-future times. It is also known simply as Civilization, or abbreviated to Civ or Civ I.

Civilization was originally developed for DOS running on a PC. It has undergone numerous revisions for various platforms (including Windows, Macintosh, Amiga, Atari ST, PlayStation, N-Gage and Super Nintendo) and now exists in several versions. The N-Gage version was the last game released for the system in North America.

A world map screenshot from the Amiga version of Civilization

Civilization is a turn-based single-player strategy game. The player takes on the role of the ruler of a civilization, starting with only one settler unit, and attempts to build an empire in competition with between two and six other civilizations. The game requires a fair amount of micromanagement (although less than any of the simulation games).[3] Along with the larger tasks of exploration, warfare and diplomacy, the player has to make decisions about where to build new cities, which improvements or units to build in each city, which advances in knowledge should be sought (and at what rate), and how to transform the land surrounding the cities for maximum benefit. From time to time the player's towns may be harassed by barbarians, units with no specific nationality and no named leader. These threats only come from unclaimed land or sea, so that over time there are fewer and fewer places from which barbarians will emanate. 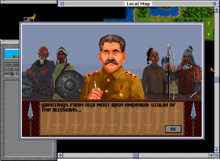 Conducting negotiations with Stalin of the Russians (in Macintosh version)

Before the game begins, the player chooses which historical civilization to play. In contrast to later games in the Civilization series, in Civ I, this is largely a cosmetic choice, affecting titles, city names, musical heralds, color, and also their starting position on the "Play on Earth" map (and thus different resources in one's initial cities). It has no effect on starting position, however, when starting a random world game or a customized world game. The player's choice of civilization also prevents the computer from being able to play as that civilization or the other civilization of the same color, and since computer-controlled opponents display certain traits of their civilizations this affects gameplay as well. The Aztecs are both fiercely expansionistic and generally extremely wealthy, for example. Other civilizations include the Americans, the Mongols, and the Romans. Each civilization is led by a famous historical figure, such as Mahatma Gandhi for Indians.

The scope of the game is huge — larger than most other computer games. The game begins in 4000 BC, before the Bronze Age, and can last through to 2100 AD (on the easiest setting) with Space Age and "future technologies". At the start of the game there are no cities anywhere in the world: the player controls one or two settler units, which can be used to found new cities in appropriate sites (and those cities may build other settler units, which can go out and found new cities, thus expanding the empire). Settlers can also alter terrain, build improvements such as mines and irrigation, build roads to connect cities, and later in the game they can construct railroads which offer unlimited movement. 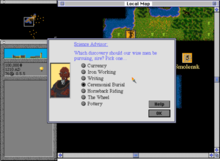 As time advances, new technologies are developed; these technologies are the primary way in which the game changes and grows. At the start, players choose from advances such as pottery, the wheel, and the alphabet to, near the end of the game, nuclear fission and spaceflight. Players can gain a large advantage if their civilization is the first to learn a particular technology (the secrets of flight, for example) and put it to use in a military or other context. Most advances give access to new units, city improvements or derivative technologies: for example, the chariot unit becomes available after the wheel is developed, and the granary building becomes available to build after pottery is developed. The whole system of advancements from beginning to end is called the technology tree, or simply the Tech tree; this concept has been adopted in many other strategy games. Since only one tech may be "researched" at any given time, the order in which technologies are chosen makes a considerable difference in the outcome of the game and generally reflects the player's preferred style of gameplay.

Players can also build Wonders of the World in each of the epochs of the game, subject only to obtaining the prerequisite knowledge. These wonders are important achievements of society, science, culture and defense, ranging from the Pyramids and the Great Wall in the Ancient age, to Copernicus' Observatory and Magellan's Expedition in the middle period, up to the Apollo program, the United Nations, and the Manhattan Project in the modern era. Each wonder can only be built once in the world, and requires a lot of resources to build, far more than most other city buildings or units. Wonders provide unique benefits to the controlling civilization. For example, Magellan's Expedition increases the movement rate of naval units. Wonders typically affect either the city in which they are built (for example, the Colossus), every city on the continent (for example, the Hanging Gardens), or the civilization as a whole (for example, Darwin's Voyage). Some wonders are made obsolete by new technologies.

The game can be won by destroying all other civilizations, reaching the end of the modern era with the highest score, or by winning the space race by reaching the star system of Alpha Centauri.

Meier admits to "borrowing" many of the technology tree ideas from a board game also called Civilization, published in the United Kingdom in 1980 by Hartland Trefoil (later by Gibson Games), and in the United States in 1981 by Avalon Hill. The early versions of the game even included a flier of information and ordering materials for the board game. There is now a board game based on the computer game version of Civilization.[4]

Meier was the third major designer to plan a computer version of Civilization, but the first to actually carry out that plan. Danielle Bunten Berry planned to start work on the game after completing M.U.L.E. in 1983, and again in 1985, after completing The Seven Cities of Gold at Electronic Arts. In 1983 Bunten and producer Joe Ybarra opted to first do Seven Cities of Gold. The success of Seven Cities in 1985 in turn led to a sequel, Heart of Africa. Bunten never returned to the idea of Civilization.[5] Meier's designs of Pirates! and Colonization both contain elements of Bunten's The Seven Cities of Gold. Don Daglow, designer of Utopia, the first simulation game, began work programming a version of Civilization in 1987. He dropped the project, however, when he was offered an executive position at Brøderbund, and never returned to the game.[6]

When the first version of Civilization was being developed, it was designed to run on an IBM PC computer, which at the time was transitioning from 16 color EGA to VGA, which could use 256 different colors. The decision to limit the number of different civilizations to 16 was made to make Civilization compatible with both display standards: 16 civilizations for the 16 colors available to EGA.[7]

This game has been one of the most popular strategy games of all time,[8] and has a loyal following of fans. The game (by means of all its versions and updates) has endured for almost two decades, with product being offered for sale the entire time in retail stores. This high level of interest has spawned a number of free and open source versions and inspired similar games by other commercial developers, as well.

In 1992, Civilization won the Origins Award for Best Military or Strategy Computer Game of 1991.[9]

In November 1996, Computer Gaming World's Anniversary Edition, Civilization was chosen the #1 of the 150 Best Games of All Time, and it was described as follows:

While some games might be equally addictive, none have sustained quite the level of rich, satisfying gameplay quite like Sid Meier's magnum opus. The blend of exploration, economics, conquest and diplomacy is augmented by the quintessential research and development model, as you struggle to erect the Pyramids, discover gunpowder, and launch a colonization spacecraft to Alpha Centauri. For its day, Civilization had the toughest computer opponents around - even taking into account the "cheats", that in most instances added rather than detracted from the game. Just when you think the game might bog down, you discover a new land, a new technology, another tough foe - and you tell yourself, "just one more turn", even as the first rays of the new sun creep into your room... the most acute case of game-lock we've ever felt.

Sid Meier's CivNet was released in 1995 and was a remake of the original game with added multiplayer, improved graphics and sound, and Windows 3.1/95 support. Gameplay was almost identical to the original game. There were several methods of multiplayer, including LAN, primitive Internet play, hotseat, modem, and direct serial link.[citation needed]

An open source clone of Civilization has been developed under the name of Freeciv, with the slogan "'Cause civilization should be free". Currently it can be configured to match the rules of both Civilization and Civilization II. Another game that partially clones it is a public domain game called C-evo.

In 1994, MicroProse published Master of Magic, a similar game but embedded in a medieval-fantasy setting where instead of technologies the player (a powerful wizard) develops spells, among other things. The game also shared many things with the popular fantasy card-trading game Magic: The Gathering.

Also in 1994, Meier produced a similar game called Colonization. Colonization, while very similar to Civilization, never became as popular. It has been criticized on several theoretical grounds, particularly because it allows the player to exterminate native tribes and because it ignores slavery and other historically important features in the creation of many nations and empires.[12] Civilization III, however, recognized slavery in the game play.

The 1999 game Sid Meier's Alpha Centauri was also created by Meier and is in the same genre, but with a futuristic/space theme. Many of the interface and gameplay innovations in this game eventually made their way into Civilization III and IV. Alpha Centauri essentially picks up where Civilization and Civilization II left off, with the space ship arriving at Sol's closest neighbor.