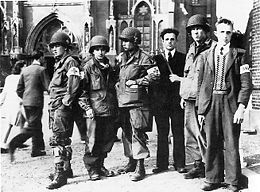 Anti-fascism is the opposition to fascist ideologies, groups and individuals, such as that of the resistance movements during World War II. The related term antifa derives from Antifaschismus, which is German for anti-fascism; it refers to individuals and groups on the left of the political spectrum, that are dedicated to fighting fascism. 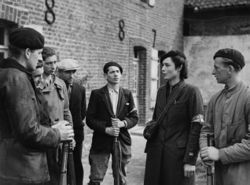 In the 1920s and 1930s in France, anti-fascists confronted aggressive far right groups such as the Action Française movement in France, which dominated the Latin Quarter students' neighborhood.[1]

Symbol of the Iron Front

In the 1920s and 1930s in Germany, Communist Party and Social Democratic Party members advocated violence and mass agitation amongst the working class to stop Adolf Hitler's Nazi Party and the Freikorps.[citation needed] Leon Trotsky wrote:

"fighting squads must be created ... nothing increases the insolence of the fascists so much as 'flabby pacifism' on the part of the workers' organisations ... [It is] political cowardice [to deny that] without organised combat detachments, the most heroic masses will be smashed bit by bit by fascist gangs."[2]

Among the anti-fascist organizations formed to counter the Nazis was the Rotfrontkämpferbund (English:Red Front Fighters' League), which was created in 1924. The Rotfront was a paramilitary organization affiliated with the Communist Party of Germany that engaged in street fights with the Nazi Sturmabteilung. Its first leader was Ernst Thälmann, who would later die in a concentration camp and become widely honored in East Germany as an anti-fascist and socialist. After German reunification in 1990, many anti-fascist groups formed in reaction to a rise in far right extremism and violence, such as the Solingen arson attack of 1993.[3] According to the German intelligence agency Bundesamt für Verfassungsschutz, the contemporary anti-fascist movement in Germany includes those who are willing to use violence.[4]

In Italy in the 1920s, anti-fascists — many from the workers' movement — fought against the violent Blackshirts, and against the rise of fascist leader Benito Mussolini. After the Italian Socialist Party (PSI) signed a pacification pact with the National Fascist Party on August 3, 1921, and trade unions adopted a legalist and pacified strategy, members of the workers' movement who disagreed with this strategy formed the Arditi del popolo. The General Confederation of Labour (CGT) and the PSI refused to officially recognize the anti-fascist militia, while the Italian Communist Party (PCI) ordered its members to quit the organization. The PCI organized some militant groups, but their actions were relatively minor, and the party maintained a non-violent, legalist strategy. The Italian anarchist Severino Di Giovanni, who exiled himself to Argentina following the 1922 March on Rome, organized several bombings against the Italian fascist community.[5]

Between 1920 and 1943, several anti-fascist movements were active among the Slovenes and Croats in the territories annexed to Italy after World War I, known as the Julian March.[8][9] The most influential was the militant insurgent organization TIGR, which carried out numerous sabotages, as well as attacks on representatives of the Fascist Party and the military.[10][11] Most of the underground structure of the organization was discovered and dismantled by the Organization for Vigilance and Repression of Anti-Fascism (OVRA) in 1940 and 1941,[12] and after June 1941, most of its former activists joined the Liberation Front of the Slovenian People.

During World War II, many members of the Italian resistance left their houses and went to live in the mountainside, fighting against both Italian fascists and German Nazi soldiers. Many cities in northern Italy, including Turin and Milan, were freed by anti-fascist uprisings.[13]

Large-scale anti-fascist movements were first seen in the 1930s, during the Spanish Civil War. The Republican Government and army, the Communist Party(PCE) the International Brigades, the Workers' Party of Marxist Unification (POUM) and Spanish anarchist militias such as the Iron Column fought the rise of Francisco Franco with military force. The Friends of Durruti were a particularly militant group, associated with the Federación Anarquista Ibérica (FAI). Thousands of people from many countries went to Spain in support of the anti-fascist cause, joining units such as the Abraham Lincoln Brigade, the British Battalion, the Dabrowski Battalion, the Mackenzie-Papineau Battalion and the Naftali Botwin Company. Notable anti-fascists who worked internationally against Franco included: George Orwell (who fought in the POUM militia and wrote Homage to Catalonia about this experience), Ernest Hemingway (a supporter of the International Brigades who wrote For Whom the Bell Tolls about this experience), and radical journalist Martha Gellhorn.

Antifascistisk Aktion (AFA) is an anti-fascist group founded in Sweden in 1993. AFA's Activity Guide advocates violence against neo-Nazis. Some in the mainstream media have called them "left extremists".[14][15][16] An editorial in the tabloid newspaper Expressen argued that the label anti-fascist was misleading, because of the organization's methods,[17] such as stealing the subscriber list of the National Democrats newspaper, and threatening the subscribers.[17] Other critics say the group does not respect freedom of speech, because some members have attacked fascists and other nationalists.[18][19]

The rise of Oswald Mosley's British Union of Fascists (BUF) was challenged by the Communist Party of Great Britain, socialists in the Labour Party and Independent Labour Party, anarchists, Irish Catholic dockmen and working class Jews in London's east end. A high point in the struggle was the Battle of Cable Street, when thousands of eastenders and others turned out to stop the BUF from marching. Initially, the national Communist Party leadership wanted a mass demonstration at Hyde Park in solidarity with Republican Spain, instead of a mobilisation against the BUF, but local party activists argued against this. Activists rallied support with the slogan They shall not pass, adopted from Republican Spain.

In the 1970s, fascist and far right parties such as the National Front (NF) and British Movement (BM) were making significant gains electorally, and were increasingly bold in their public appearances. This was challenged in 1977 with the Battle of Lewisham, when thousands of black and white people disrupted an NF march in South London.[24][25] Soon after, the Anti-Nazi League (ANL) was launched by the Socialist Workers Party (SWP). The ANL had a large-scale propaganda campaign and squads that attacked NF meetings and paper sales. The success of the ANL's campaigns contributed to the end of the NF's period of growth. During this period, there were also a number of black-led anti-fascist organisations, including the Campaign Against Racism and Fascism (CARF) and local groups like the Newham Monitoring Project.

The SWP disbanded the ANL in 1981, but many squad members refused to stop their activities. They were expelled from the SWP in 1981, many going on to found Red Action. The SWP used the term squadism to dismiss these militant anti-fascists as thugs. In 1985, some members of Red Action and the anarcho-syndicalist Direct Action Movement launched Anti-Fascist Action (AFA). Their founding document said "we are not fighting Fascism to maintain the status quo but to defend the interests of the working class".[26][27] Thousands of people took part in AFA mobilisations, such as Remembrance Day demonstrations in 1986 and 1987, the Unity Carnival, the Battle of Cable Street's 55th anniversary march in 1991, and the Battle of Waterloo against Blood and Honour in 1992.[28][29] After 1995, some AFA mobilisations still occurred, such as against the NF in Dover in 1997 and 1998. However, AFA wound down its national organisation and some of its branches, and by 2001 it has ceased to exist as a national organisation.

In 2001, some former AFA members founded the militant anti-fascist group No Platform, but this group soon disbanded. In 2004, members of the Anarchist Federation, Class War, and No Platform founded the organisation Antifa. This predominantly anarchist group has imitated AFA's stance of physical and ideological confrontation with fascists.

In 2003, Unite Against Fascism (UAF) formed out of a merger between the ANL and the National Assembly Against Racism, in response to electoral successes of the British National Party (BNP). UAF does not partake in militant anti-fascism, due to its critique of squadism. Organisations such as Manchester Anti-Fascist Alliance[30] and Edinburgh Anti-Fascist Alliance[31] have continued the militant tradition against far right groups such as the BNP and the English Defence League. Some of those demonstrations resulted in violent confrontations and arrests. Many of the local grassroots organisations came together in March 2010 to form the Stop Racism Stop Fascism Network.[32]

Premature anti-fascism is a term that was used in the United States to describe the views of those who opposed fascism at a time when the US government was on relatively friendly terms with fascist Italy and (to a lesser extent) Nazi Germany.[33][34] The term was applied especially to supporters of the Second Spanish Republic in the Spanish Civil War, including members of the Abraham Lincoln Brigade.