Maverick is a Intamin-made linear synchronous motor-launched blitz steel complete-circuit roller coaster at Cedar Point in Sandusky, Ohio. It was manufactured by IntaRide LLC, the United States division of Intamin, and was the five-hundredth roller coaster designed by German engineer Werner Stengel. Maverick is the seventeenth roller coaster built at the park since the Blue Streak opened in 1964 and ushered in a new era of coaster building. Maverick's US$21-million price tag makes it Cedar Point's third most expensive roller coaster. The 4,450-foot (1,360 m) course is the fourth longest at Cedar Point.[1][2] Maverick was scheduled to open on May 12, 2007, but opening was delayed until May 26, 2007 after testing revealed the heartline roll element to be too intense. Continued use of the element would have put excessive stress on trains.[3][4] As Cedar Point's 17th roller coaster, Maverick is the fourth to feature inversions. In a drop angle of 95 degrees, Maverick has Cedar Point's steepest drop out of any of the coasters in the park. The attraction's tagline is, "The Old West was never this wild."

According to Cedar Fair officials, discussion about a new roller coaster for the 2007 season started in early 2003, right after the completion of Top Thrill Dragster. In January 2006, Cedar Fair Entertainment Co. had filed for a trademark for the name Maverick. Community speculation reached its high point in the summer of 2006, right before the official announcement. The project became known officially and colloquially as "Project 2007" until the announcement on September 7, 2006.

After the close of the 2005 season in October, the White Water Landing log flume ride was retired. Although the ride was disassembled, the station was left intact and now serves as Maverick's on-ride photo booth and queue. Beginning in February 2006, concrete footers were poured on the former White Water Landing site, as well as in the pond that once housed Cedar Point's Swan Boat ride. In May 2006, track segments arrived in a fenced area near the park's off-site hotel, Breakers Express. Initially, Cedar Point covered track segments with blue tarps. After several pieces arrived and enthusiasts posted photos on the internet, the park gave up and stopped hiding the track.[5] Brown supports for Maverick were delivered to both the staging site at Breakers Express and the construction site at the park. Beginning in mid-July 2006, supports were transported across the Cedar Point causeway to the former White Water Landing site for erection. On August 14, 2006, the first track segments were installed. On September 11, 2006, the crest of the lift hill was added, thereby topping off the ride.[6]

On October 20, the last piece of track was installed. Work on the Stators began on October 30, the day after the park closed for the 2006 season, and the installation of the stators was presumably finished as of November 14, 2006. During electrical work in late October, one lane of the perimeter road that leads around the tip of the peninsula was closed to run a new electrical service line from the front of the park to Maverick's plot of land at the back.[7] Maverick is now connected to the same electrical "trunk" line as Top Thrill Dragster and Wicked Twister.[citation needed]

On May 8, 2007, four days before Maverick was scheduled to debut, park general manager John Hildebrant announced that the ride would be delayed until early June because three 40-foot (12 m) track sections after the second launch needed to be replaced. These sections made up the heartline roll element and put excessive stress on the trains, which also might have caused discomfort to passengers due to high g-forces .[3] On May 17, 2007, the heartline roll was removed and was replaced with an s-curve five days later.[8][9] The s-curve transitions the existing track from a banked right curve to a banked left curve. Installation of the s-curve was completed on May 24 and final testing and licensing of the attraction resumed.[10] On the same day, Cedar Point officials also announced that Maverick would debut on May 26.[4] While waiting for the new track to arrive, the ride continued to test with the heartline roll in place. Some observers noted trains rolling backward down the lift hill in a simulated rollback. Maverick opened on May 26, 2007.

On the day that it was going to open to the public, when a Maverick train was about to go down a 105-foot (32 m) drop, the train stopped at the top of the hill and slowly went down the hill. This is the second time that the coaster had a rollback. The train on the Maverick track went slowly down the hill to the station and then relaunched again. No one was on that train at that time and the coaster was opened a few days later to the public due to the heartline-roll delay.

A rollback is fairly common and is done daily to test the ride block system.

Maverick has six three-car trains that seat twelve passengers each. The trains have tiered seating and feature the following colors: brass, copper, gold, gunmetal, iron, and silver. Each train has a name on the front car. The trains are named Brett, Brent, Ben, Beau, Bart, and Sam. The restraint system, similar to Accelerator Coasters, includes a hydraulic over the shoulder harness and an interlocking seat belt.[2] The passenger height restriction was initially set to a minimum of 48 inches (120 cm). In May 2007, the height restriction was raised to a minimum of 52 inches (130 cm) per recommendations made by IntaRide.[11] 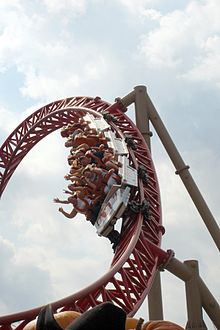 Maverick in the "Twisted Horseshoe Roll"

One of Maverick's Two airtime hills