The Oriental Magpie Robin (Copsychus saularis) is a small passerine bird that was formerly classed as a member of the thrush family Turdidae, but now considered an Old World flycatcher. They are distinctive black and white birds with a long tail that is held upright as they forage on the ground or perch conspicuously. Distributed in many parts of tropical South and Southeast Asia, they are common birds in urban gardens as well as forests. They are particularly well known for their songs and were once popular as cagebirds. 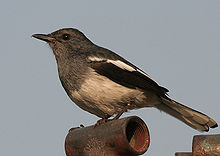 Female of the nominate race (India) 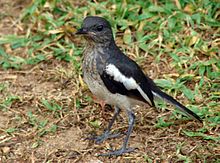 This species is 19 centimetres (7.5 in) long, including the long tail that is usually held cocked upright. It is similar in shape to the smaller European Robin, but is longer-tailed. The male has black upperparts, head and throat apart from a white shoulder patch. The underparts and the sides of the long tail are white. Females are greyish black above and greyish white. Young birds have scaly brown upperparts and head. It is the national bird of Bangladesh.

The nominate race is found on the Indian Subcontinent and the females of this race are the palest. The females of the Andamans race andamanensis are darker, heavier-billed and shorter-tailed. The Sri Lankan race ceylonensis (formerly included the Peninsular Indian populations south of the Kaveri River[2]) and southern nominate individuals have the females nearly identical to the males in shade. The eastern populations (Bhutan and Bangladesh) have more black on the tail and were formerly named erimelas.[3] The populations in Burma and further south are named as race musicus.[4] A number of other races have been named across the range including prosthopellus (Hong Kong), nesiotes, zacnecus, nesiarchus, masculus, pagiensis, javensis, problematicus, amoenus, adamsi, pluto, deuteronymus and mindanensis.[5] However many of these are not well marked and the status of some are disputed.[6] There is more geographic variation in the plumage of females than in that of the males.[7]

It is mostly seen close to the ground, hopping along branches or foraging in leaf-litter on the ground with cocked tail. Males sing loudly from the top of trees or other high perches during the breeding season.[3]

The Indian name of dhyal or dhayal has led to many confusions. It was first used by Eleazar Albin ("dialbird") in 1737 (Suppl. N. H. Birds, i. p. 17, pls. xvii. xviii.), and Levaillant (Ois. d'Afr. iii. p. 50) thought it referred to a sun dial and he called it Cadran. Thomas C. Jerdon wrote (B. India, ii. p. 1l6) that Linnaeus,[8] thinking it had some connection with a sun-dial, called it solaris, by lapsus pennae, saularis. This was however identified by Edward Blyth as an incorrect interpretation and that it was a Latinization of the Hindi word saulary. A male bird was sent with this Hindi name from Madras by surgeon Edward Buckley to James Petiver, who first described the species (Ray, Synops. Meth. Avium, p. 197).[9][10]

This magpie-robin is a resident breeder in tropical southern Asia from Bangladesh, interior India, Sri Lanka and eastern Pakistan east to Indonesia, Thailand, south China, Singapore and the Philippines.[3] They have been introduced to Australia.[11] 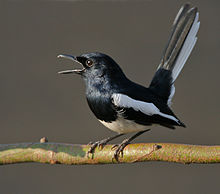 Magpie Robins breed mainly from March to July in India and January to June in south-east Asia. The display of the male involves puffing up the feathers, raising the bill, fanning the tail and strutting.[2] They nest in tree hollows or niches in walls or building. The female is involved in most of the nest building that happens about a week before the eggs are laid. Four or five eggs are laid in intervals of 24 hours and these are oval and usually pale blue green with brownish speckles. The eggs are incubated by the female alone for 8 to 14 days.[12][13] The nests are said to have a characteristic odour.[14]

Females spend more effort on feeding the young than males. Males are quite aggressive in the breeding season and will defend their territory.[15] and respond to the singing of intruders and even their reflections.[16] Males spend more time on nest defense.[17] Studies of the bird song show dialects[18] with neighbours varying in their songs. The calls of many other species may be imitated as part of their song.[19] This may indicate that birds disperse and are not philopatric.[20] They appear to use elements of the calls of other birds in their own songs.[21] Females may sing briefly in the presence of male.[22] Apart from their song, they use a range of calls including territorial calls, emergence and roosting calls, threat calls, submissive calls, begging calls and distress calls.[23] The typical mobbing calls is a harsh hissing krshhh.[3][24]

The food of Magpie Robins is mainly insects and other invertebrates. They are known to occasionally take geckos,[25][26] leeches,[27] centipedes[28] and even fish.[29]

They are often active late at dusk.[3] They sometimes bathe in rainwater collected on the leaves of a tree.[30]

This species is considered as one of "little concern" globally but in some areas the species is on the decline.

In Singapore and Hong Kong (Malay names Kampung/Cerang) they were common in the 1920s, but declined in the 1970s, presumably due to competition from introduced Common Mynas,[31] Poaching for the pet bird trade and habitat changes have also affected them and they are locally protected by law.[32]

This species has few avian predators. Several pathogens and parasites have been reported. Avian malaria parasites have been isolated from the species[33] while H4N3[34] and H5N1 infection has been noted in a few cases.[35] Parasitic nematodes of the eye have been described[36] 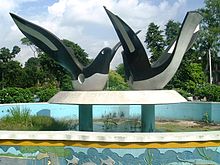 Magpie Robins were widely kept as cagebirds for their singing abilities and for fighting in India in the past.[37] They continue to be in the pet trade in parts of Southeast Asia.

The Magpie Robin is the National Bird of Bangladesh, where it is common and known as the Doyel or Doel (Bengali: দোয়েল). It is a widely used symbol in Bangladesh, appearing on currency notes, and a landmark in the city of Dhaka is named as the Doyel Chatwar (meaning: Doyel Square).

In Sri Lanka this bird is called Polkichcha.[38]