Stingray
This article is about the group of fishes. For other uses, see Stingray (disambiguation).

Most stingrays have one or more barbed stings (modified from dermal denticles) on the tail, which is used exclusively in self-defense. The stinger may reach a length of approximately 35 cm (14 in), and its underside has two grooves with venom glands.[3] The stinger is covered with a thin layer of skin, the integumentary sheath, in which the venom is concentrated.[4] A few members of the suborder, such as the manta rays and the porcupine ray, do not have stings.[5]

Stingrays are common in coastal tropical and subtropical marine waters throughout the world, and also includes species found in warmer temperate oceans such as Dasyatis thetidis, and those found in the deep ocean such as Plesiobatis daviesi. The river stingrays, and a number of whiptail stingrays (such as the Niger stingray), are restricted to fresh water. Most myliobatoids are demersal, but some, such as the pelagic stingray and the eagle rays, are pelagic.[6]

While most stingrays are relatively widespread and not currently threatened, there are several species (for example Taeniura meyeni, D. colarensis, D. garouaensis, and D. laosensis) where the conservation status is more problematic, leading to them being listed as vulnerable or endangered by IUCN. The status of several other species are poorly known, leading to them being listed as Data Deficient.[7]

A stingray's underside showing its mouth and the double row of gill openings. The pair of claspers (at the base of the tail) identifies it as male.

The flattened bodies of stingrays allow them to effectively conceal themselves in their environment. Stingrays do this by agitating the sand and hiding beneath it. Because their eyes are on top of their bodies and their mouths on the undersides, stingrays cannot see their prey; instead, they use smell and electro-receptors (ampullae of Lorenzini) similar to those of sharks.[8] Stingrays feed primarily on molluscs, crustaceans, and occasionally on small fish. Some stingrays' mouths contain two powerful, shell-crushing plates, while other species only have sucking mouthparts. Stingrays settle on the bottom while feeding, often leaving only their eyes and tail visible. Coral reefs are favorite feeding grounds and are usually shared with sharks during high tide.[9]

When a male is courting a female, he will follow her closely, biting at her pectoral disc. He then places one of his two claspers into her valve.[10]

Stingrays are ovoviviparous, bearing live young in "litters" of five to thirteen. The female holds the embryos in the womb without a placenta. Instead, the embryos absorb nutrients from a yolk sac, and after the sac is depleted, the mother provides uterine "milk".[11]

At the Sea Life London Aquarium 2 female stingrays have delivered 7 baby stingrays, although the mothers have not been near a male for 2 years. "Rays have been known to store sperm and not give birth until they decide the timing is right".[12]

A stingray's stinger (ruler in cm)

Stingrays do not aggressively attack humans (a notable exception being the death of Steve Irwin), though stings do normally occur if a ray is accidentally stepped on.[13] To avoid stepping on a stingray in shallow water, the water should be waded through with a shuffle.[14] Alternatively, before wading, stones can be thrown into the water to scare stingrays away.[15] Contact with the stinger causes local trauma (from the cut itself), pain, swelling, muscle cramps from the venom, and later may result in infection from bacteria. The injury is very painful, but seldom life-threatening unless the stinger pierces a vital area.[13] The barb usually breaks off in the wound, and surgery may be required to remove the fragments.[16] 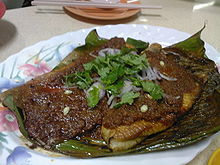 Barbecued stingray is commonly served in Singapore and Malaysia.

Rays are edible, and may also be caught as food by fishing lines or spears.[17] Stingray recipes abound throughout the world, with dried forms of the wings being most common. For example, in Singapore and Malaysia, stingray is commonly barbecued over charcoal, then served with spicy sambal sauce. Generally, the most prized parts of the stingray are the wings (flaps is the proper terminology), the "cheek" (the area surrounding the eyes), and the liver. The rest of the ray is considered too rubbery to have any culinary uses.[18]

While not independently valuable as a food source, the stingray's capacity to damage shell fishing grounds can lead to bounties being placed on their removal.[19]

Stingray City in Grand Cayman allows swimmers, snorkelers, and divers to swim with and feed the stingrays.

Stingrays are usually very docile and curious, their usual reaction being to flee any disturbance, but will sometimes brush their fins past any new object they come across. Nevertheless, certain larger species may be more aggressive and should be approached with caution, as the stingray's defensive reflex (use of its poisoned stinger) may result in serious injury or death.[20]

Dasyatids are not normally visible to swimmers, but divers and snorkelers may find them in shallow sandy waters, more so when the water is warm. In the Cayman Islands there are several dive sites called Stingray City, Grand Cayman, where divers and snorkelers can swim with large southern stingrays (D. americana) and feed them by hand.[21] There is also a "Stingray City" in the sea surrounding the Caribbean island of Antigua. It consists of a large, shallow reserve where the rays live, and snorkeling is possible, since the rays are used to the presence of humans.[22]

In Belize, off the island of Ambergris Caye, there is a popular marine sanctuary called Hol Chan. Here, divers and snorkelers often gather to watch stingrays and nurse sharks that are drawn to the area by tour operators who feed the animals.

Many Tahitian island resorts regularly offer guests the chance to "feed the stingrays and sharks". This consists of taking a boat to the outer lagoon reefs then standing in waist-high water while habituated stingrays swarm around, pressing right up against tourists seeking food from their hands or that being tossed into the water. The boat owners also "call in" sharks which, when they arrive from the ocean, swoop through the shallow water above the reef and snatch food offered to them.[23] 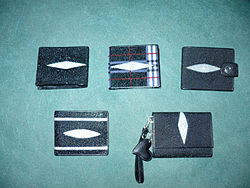 The skin of the ray (same in Japanese) is used as an under layer for the cord or leather wrap (known as ito in Japanese) on Japanese swords due to its hard, rough, skin texture that keeps the braided wrap from sliding on the handle during use. They are also used to make exotic shoes, boots, belts, wallets, jackets, and also cellphone cases.[24]

Several ethnological sections in museums[25] such as the British Museum display arrowheads and spearheads made of stingray stingers, used in Micronesia and elsewhere. [26] Henry de Monfreid states in his books that before World War II, in the Horn of Africa, whips were made from the tail of big stingrays, and that this device inflicted cruel cuts, so in Aden the British forbid its use on women and slaves. In former Spanish colonies a stingray is called raya làtigo ("whip ray"). [27]

Monfreid also writes in several places about men of his crew suffering stingray wounds while stranding and wading into Red Sea shallows to load or unload smuggled wares: he wrote that to "save the man's life" searing the wound with a red-hot iron was necessary.[28] 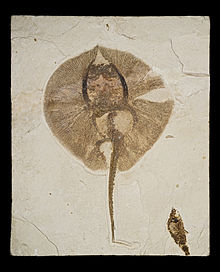 Although stingray teeth are rare on sea bottoms compared to the similar shark teeth, scuba divers searching for the latter do encounter the teeth of stingrays. Permineralized stingray teeth have been found in sedimentary deposits around the world, including fossiliferous outcrops in Morocco. [29]