The Morgan is one of the earliest horse breeds developed in the United States.[1] Tracing back to the stallion Figure, later named Justin Morgan after his best-known owner, the breed excels in many disciplines, and is known for its versatility.

The Morgan horse is compact and refined in build, with strong limbs, an expressive face, large eyes, well-defined withers, laid back shoulders and a well arched neck and a clean cut head. There is officially one Breed Standard for Morgan type regardless of the discipline or bloodline of the individual horse.[2]

Registered Morgans come in a variety of colors although they are most commonly bay, black, and chestnut. Less common colors include gray, palomino, roan, cremello, perlino, dun, buckskin, and silver dapple. Since a recent registration rule change eliminating rules on white markings, three of the pinto color patterns are also recognized sabino, frame overo, and splashed white. The tobiano pattern has not been noted in Morgans.[3]

The breed standard ranges from 14.1-15.2 hands (1.45 to 1.57 meters) with some individuals over and under.[2] Morgans under 14.2 are eligible for registration with the National Morgan Pony Registry and can be shown in open "Pony" competitions, even though they are technically horses, regardless of height, and are usually exhibited as such.[4] 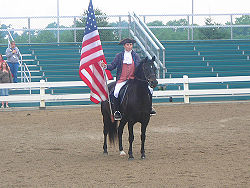 A Morgan horse with rider in colonial attire at the Kentucky Horse Park. Costuming intended to resemble Justin Morgan and Figure.

All Morgans trace back to a single foundation sire, a stallion named Figure, who was born in West Springfield, Massachusetts in 1789.[5] He was at one time owned by a man named Justin Morgan. The horse later came to be identified by the name of this particular owner, and "the Justin Morgan horse" also gave its name to the breed.

Figure is thought to have stood about 14 hh (1.42 m), and to have weighed about 950 lb (430 kg). He was known for his prepotency, passing on his distinctive looks, conformation, temperament, and athleticism. He died in 1821 at the age of 32 and is now buried in Tunbridge, Vermont.

Many myths surround Figure and Justin Morgan. The popular children's book, Justin Morgan Had a Horse by Marguerite Henry, perpetuated some misconceptions about the breeding of Figure (called "Little Bub" in the book) and his early life. A movie about the pair was also made by Walt Disney Studios in 1972, which also took liberties with the depiction of events.

The breed's trotting ability made it a favorite for harness racing in the 1840s. Morgans were also used in the Civil War as cavalry mounts, including Sheridan's "Rienzi"[6] and Stonewall Jackson's "Little Sorrel". In the post-civil war era, Morgans were also used in the Pony Express and as mounts for the cavalry in the western United States. The only survivor of the Custer regiment from The Battle of Little Bighorn was the Morgan-Mustang mixed breed horse Comanche. 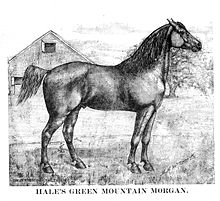 Daniel C. Lindley, a native of Middlebury, Vermont, compiled and published a book of Morgan breeding stallions published in 1857. Colonel Joseph Battell, also a Middlebury, Vermont native, published the first volume of the Morgan Horse Register in 1894, marking the beginning of a formal breed registry. In 1907, the US Department of Agriculture established the U.S. Morgan Horse Farm in Middlebury, Vermont on land donated by Battell for the purpose of perpetuating and improving the Morgan breed.[7] The breeding program aimed to produce horses that were sound, sturdy, well-mannered, and capable of performing well either under saddle or in harness.[8][9] The Morgan Horse Farm was transferred from the USDA to the Vermont Agricultural College (now the University of Vermont) by Public Law 26 (S. 271), approved by Congress on May 7, 1951.

More than 132,000 Morgan Horses have been registered. The stud book was closed in 1948 in an effort to preserve the breed. The Morgan has also influenced several other breeds, including the Standardbred, Tennessee Walker, American Quarter Horse, Missouri Fox Trotter, Racking horse, and the American Saddlebred. Nearly 90% of Saddlebred horses today have Morgan blood. 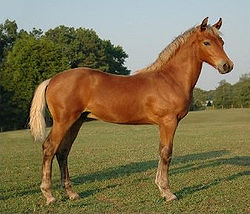 The Morgan Horse has a horse show circuit for that breed only. It consists of all levels of riding and all disciplines. Wins at regional championships qualify competitors to compete in Oklahoma City at the Morgan Grand Nationals. The first national Morgan Horse competition was held in 1973 in Detroit, and is now held each October in Oklahoma City, OK. In addition to the Morgan Grand National, there are 10 regional championship shows and many other official (referred to as "Class A") shows. Morgans also compete in all-breed shows, 4-H shows, and other events.

The Morgan is also able to perform in the Olympic and internationally recognized FEI disciplines, which include show jumping, dressage, eventing, and combined driving, making the Morgan a versatile breed of horse.