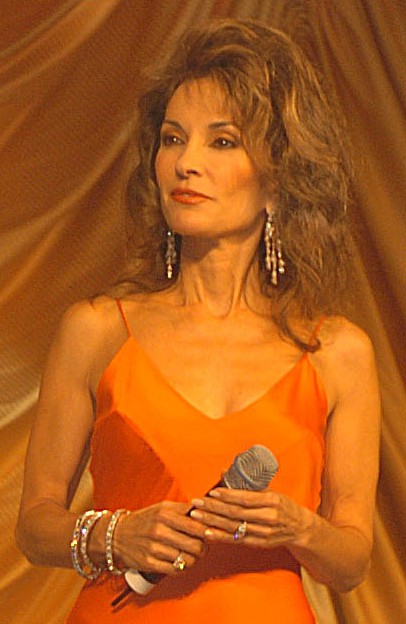 Susan Victoria Lucci (born December 23, 1946) is a -winning American actress. Lucci has been called "Daytime's Leading Lady" by "", with "" and "" citing her as the highest-paid actor in daytime television. Her salary is reportedly over $1 million a year.

Susan Lucci was born to Jeanette and Victor Lucci on December 23, 1946. She attended Garden City High School in , graduating in 1964. She then attended Marymount College at , and graduated from Marymount in 1968.

Lucci is best known for playing the larger-than-life diva on the ABC "", on which she has appeared since the show's inception on , . She and , who plays her former father-in-law, Dr. Joe Martin, are the show's only original stars left on the show today. Lucci's long tenure on the show has made her an iconic presence on daytime; she is closely identified with both the role of Erica and with daytime television itself.

Lucci was nominated for the Outstanding Lead Actress in a Drama Series Emmy for her work on "All My Children" almost every year since 1978. When Lucci didn't win the award after several consecutive nominations, her image in the media began to be lampooned, as she became notoriously synonymous with never winning an Emmy. 's "" exploited this by asking her to host an episode (unusual for a daytime serial actor), where her monologue parodied the cast, crew, and even stagehands carrying Emmys of their own in her presence. In addition, she appeared in a 1989 television commercial for the sugar substitute "Sweet One", intended to portray her as the opposite of her villainess character, yet throwing one of Erica Kane's characteristic tantrums, shouting "11 years without an Emmy! What does a person have to do around here to get an Emmy?"

After 18 failed nominations in a row, it came as a shock to both her and the viewing audience when she finally won in 1999. [ [http://www.eonline.com/News/Items/0,1,4800,00.html E online news] ] When presenter announced Lucci's name, the audience erupted in a standing ovation, lasting several minutes. As the sobbing actress took to the stage, cameras caught "All My Children" co-stars and weeping openly, along with long-time supporter, actress and television host . Actor was seen bowing in the aisles and talk show host rushing the stage cheering from the wings. Lucci's win and subsequent teary-eyed speech made headline news on television and in print for several weeks thereafter.

Lucci has appeared in a number of television shows and television films. In 1990, she began a series of guest spots on the popular nighttime soap opera "Dallas". She hosted 's "" in October of that year; in one skit, she appeared as Erica Kane competing on a . [cite web| title= Game Breakers transcript featuring Erica Kane | publisher=snltranscripts.jt.org | url=http://snltranscripts.jt.org/90/90bgame.phtml | accessdate=2007-07-10]

In 1995, Lucci appeared in the Lifetime television film "Ebbie". This film was an updated version of the classic "". Lucci played a -like department store owner visited by Marley and the three ghosts on . Critics praised her performance, and the film has become a holiday favorite.

"Dancing with the Stars"

Lucci is scheduled to compete in Season 7 of "Dancing with the Stars", airing in fall 2008; her dance partner will be . Lucci said that "Dancing" had asked her to appear before, but she had turned it down in part because of the travel it would require ("Dancing" tapes in Los Angeles, while "All My Children" tapes in New York). She changed her mind, though, in part because of the experience of fellow "All My Children" star , who finished fifth in season 5. [ [http://community.tvguide.com/blog-entry/TVGuide-Editors-Blog/Things-Dancing-Stars/Dancing-Stars-2008/800044487 Dancing with the Stars Season 7 Cast Includes Olympic Gold-Medalist] " "". , . Retrieved on .]

In 2008, Lucci appeared as a spokesperson for Malibu Pilates exercise equipment in an which aired on September 20, 2008, on ABC at 2:00pm. Lucci's "All My Children" co-star was also featured. Lucci is also a spokeswoman for "Youthful Essence," a home microdermabrasion system. Recent infomercials have featured her past and present "AMC" costars , , , and , as well as of "". In addition, Lucci has a line of clothing and jewelry that is featured on the .

Other credits and achievements

In 1991, she launched the Susan Lucci Collection of hair care products. Her career as a businesswoman continues, with many lucrative skin care, fashion, jewelry and makeup lines selling on .

For much of the 1980s and into the 1990s, Lucci did many commercials for the local Ford dealers in the area.

Lucci's father, Victor, was a first-generation American. , contrary to various internet rumors, is not her mother. [ [http://www.snopes.com/movies/actors/lucci.asp Susan Lucci: Claim disproven] ] Lucci has been married since , to n businessman Helmut Huber. They are the parents of soap opera actress (who played on the daytime serial "" until that series' cancellation by in September ) and Andreas Huber (who did not follow his mother and sister into an acting career). She became a grandmother when her daughter, Liza, gave birth on &mdash; Lucci's 60th birthday. The baby was named Royce Alexander. [ Her daughter Liza recently gave birth to Lucci's second grandchild. [http://community.tvguide.com/thread.jspa?threadID=700015625&rssDate=12345678 TV Guide news] ] Liza is currently expecting another child, who will be Lucci's second grandchild.