Urbania is a comune (municipality) in the Province of Pesaro e Urbino in the Italian region of Marche, located about 80 km west of Ancona and about 40 km southwest of Pesaro, next to the river Metauro.

It is a famous ceramics and majolica production centre. In recent years, it has become more closely associated with the Befana folk tradition.

Originally known as Castel delle Ripe, it was a free commune of the Guelph party. In 1277 it was destroyed by the Ghibellines, then rebuilt by the Provençal Guillaume Durand in 1284 and christened Casteldurante. Later it was ruled by the Brancaleoni family. When the latter were ousted, the city offered itself to the Dukes of Urbino, who used the palace in the city as summer residence and had it restored by architects such as Francesco di Giorgio Martini. The last della Rovere duke, Francesco Maria II, is buried in the Ducal Palace of Urbania.

In 1631 it became part of the Papal States. Five years later its name changed to the current one, in honor of Pope Urban VIII.

On January 23th 1944 Urbania was bombed by the Allies, resulting in the deaths of 250 civilians.[1] It was a Sunday so the people had gathered in the town, increasing the number of victims.

After World War II Urbania received the Bronze Medal for Military Valour for the deeds of its citizens during the partisan warfare. 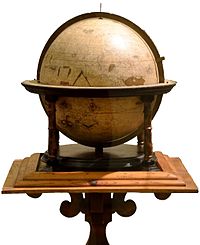 Globe signed by Mercator and dated 1541; now in the 'Palazzo Ducale' museum. It is one of about 22 existing Mercator globes.[2]

The main entrance of the Barco Ducale viewed from south west

Urbania features as the main setting of Ci Siamo (ISBN 1-86391-109-X) a textbook for students of Italian used by many Australian students in the middle years of high school.