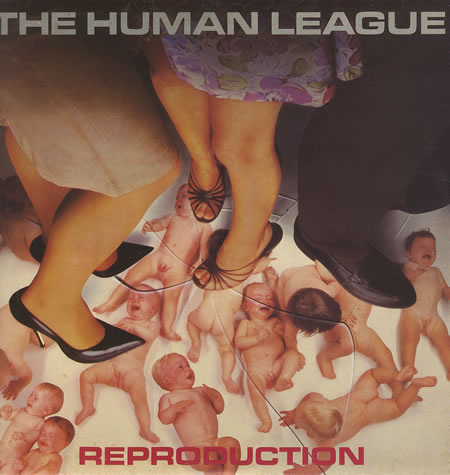 "Reproduction" is the debut album released by British band . The album was released in October 1979 through Ltd.

Reproduction contains 9 tracks of electronic music/synthpop and was recorded during 6 weeks at The Human League's studio in . The recordings were produced by , who had previously worked on some key new wave recordings such as Iggy Pop's "Lust for Life" and the first Magazine album, and would go on to produce numerous hit albums of the 1980s, most notably for .

The album sold steadily upon release and received some good reviews, but it failed to chart well in the UK (until it was re-released in 1981 and reached number 34 in the UK and was certified Gold).

The album has a decidedly experimental feel to it, and most of the songs have dark aspects to the lyrics, which are sometimes hard to comprehend.

The only single released from the album was "" in late 1979. It reached number 62 on the UK Singles Chart, but was still not enough to break the group into the mainstream, despite being a likeable, dancy tune. (The Human League's debut single, "Being Boiled", was not included on the original album but was added as an extra track on all CD issues from the late 1980s onwards; a re-recorded version of that single's B-side, "Circus of Death", was however included on the album.)

The album was composed and engineered by The Human League (Oakey/Ware/Marsh) and Bob Last for Virgin Records Ltd. 1979.

The following tracks were first added when the album was released on CD in the late 1980s:

"Introducing" was originally the B-side of the "Empire State Human" single. The instrumental "" tracks had been released as an EP in 1979, with "Flexidisc" included as a free - the latter is a tongue-in-cheek in-studio meta-conversation between the members of the band and their manager, Bob Last, about their plans to include a Flexidisc with their EP and what to put on it. The last two tracks were the A and B sides of the band's debut single, , released prior to their signing to Virgin.