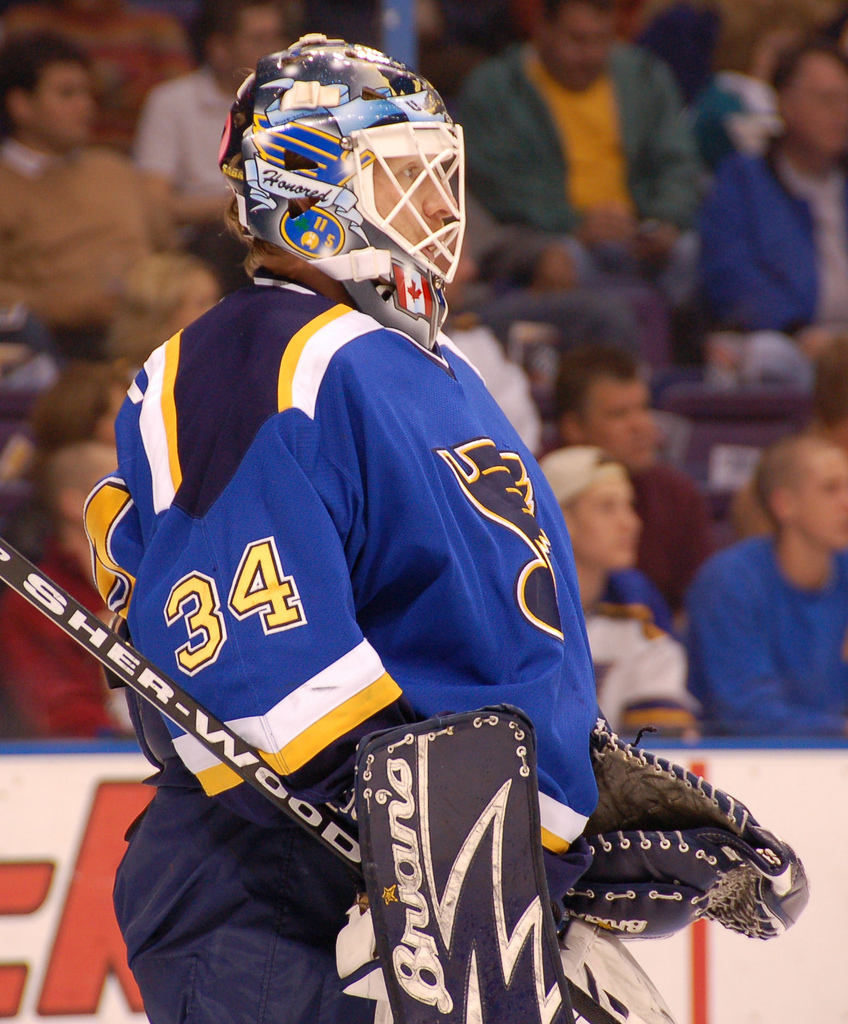 Emanuel Legacé (born , in Alliston, ) is a Canadian professional with the St. Louis Blues of the . He has also played for the and the .

Prior to being selected by the Whalers, Legace played in the OHL with the and in the Roller Hockey League for the . Legacé spent the 1993–1994 season as a member of the Canadian National Team and played in 16 games.

From there, Legacé spent a lengthy apprenticeship in the minor leagues, largely for the AHL's between 1994–98. He was a star with Springfield, garnering First Team All-Star honors and the AHL's leading goaltender award in 1996.

Although he spent most of the 1998–1999 season with the IHL , Legacé got his first NHL start with the Kings. While he played well in limited action for Los Angeles, he signed with Detroit on July 15, 1999. However, since the Red Wings had both and as veteran goaltenders, Legacé was left unprotected on waivers. He was then claimed by the on September 29, 1999. Yet almost two weeks later, on October 13, 1999, Legacé was reacquired by the Red Wings from the waiver wire when the Canucks in turn left him unprotected. While Legacé spent most of his time playing for the IHL's , he did get some action in playing for the Red Wings, posting a perfect 4–0–0 record.

In training camp the next season, Legacé beat out Wregget to establish himself as the backup goaltender to Chris Osgood. Osgood had a very slow start, and Legacé subsequently saw much action. Posting a 24–5–5 record in 39 games, Legacé looked to have assumed the starting role for the team. However, Osgood regained his stride and resumed starting duties in the playoffs.

With the 2001–02 season, Legacé became backup to when Osgood was waived and claimed by the . Legacé played in 20 games and only saw playoff action to relieve Hašek during a loss to the St. Louis Blues; the Red Wings won the that season.

The next season, with the retirement of Hašek and the signing of star goaltender , Legacé saw his workload increase from 20 games to 25 games in the 2002–03 season, but remained the team's backup.At the start of the 2003–04 season, Hašek made the startling decision to come out of retirement and return to the Red Wings. Curtis Joseph was still being paid $8 million a year and, due to his hefty contract, was not looking to be traded or picked up by a team. While Legacé was initially going to be the 3rd goalie behind two elite goaltenders, the Red Wings opted to send Joseph to the minors while Legacé served as Hašek's backup. Hašek, however, was not properly conditioned for a return to the NHL. Minor injuries and inconsistent play from Hašek thrust Legacé into the starting role. Injuries to both Hašek and Legacé opened the door for the Red Wings to call up Joseph from the minors, along with to serve as his backup. When Legacé returned from injury, MacDonald was sent back to the minors while Legacé and Joseph ended up serving as Detroit's goaltending tandem for the remainder of the season, as Hašek opted not to return to the team from injury. An injury to Joseph late in the season found Legacé temporarily working with minor-league goaltender , but Lamothe was returned to the AHL's when Joseph returned to the roster.

The Red Wings faced the in the opening round of the 2004 Playoffs. While Legacé won the first two games, he did not perform to team expectations and was pulled in the middle of the fourth game in favor of Joseph, who ended up backstopping for the remainder of the series. The Red Wings won the series but lost the next series against the .

Legacé briefly played in Russia during the , but eventually sat season out, favoring to be close to his residence in , . Legacé was the NHLPA Representative for the Detroit Red Wings until 2005, when the role was assumed by . Legacé has since become a vocal critic of both the league and the players' union, especially in regard to how both sides handled the .

For the 2005–06 season, Chris Osgood was re-signed by the Red Wings to compete with Legacé for the starting job. However, due to Osgood's injuries and general lack of conditioning, Legacé was awarded the starting goaltender role for the Detroit Red Wings. By of 2005 with the Red Wings defeating the 5–2, Legacé set the record for the most wins by a goaltender in the month of October (10–1–0). Unfortunately, Legacé's regular season success didn't follow him into the postseason, as the 8th seeded stunned hockey observers everywhere by eliminating Detroit in the opening round of the playoffs.

Prior to Detroit's elimination from the 2005-06 playoffs, Legacé indicated to the media that if Detroit failed to win the opening round of the playoffs, he wouldn't be returning to the team. On June 10, 2006, Ken Holland, General Manager of the Red Wings, announced that Legacé would be allowed to become a free agent. With the Red Wings acquiring Hašek once again during the offseason, Legace signed a one-year contract with Wings` division-rivals, the St. Louis Blues on , . [http://www.detnews.com/apps/pbcs.dll/article?AID=/20060808/UPDATE/608080427] [http://tsn.ca/nhl/news_story/?ID=173662&hubname=] . In his first season with the Blues Legace played in 45 games, posting a 23–15–5 record. His season was cut short due to a mid-season concussion and season-ending knee surgery, but his play was solid enough to earn him a two-year contract extension with the Blues on , . [http://www.nhl.com/nhl/app?articleid=289531&page=NewsPage&service=page] Legace has enjoyed success with St. Louis in the 2007–08 season, and was named to the 2008 NHL All-Star Game. [http://blues.nhl.com/team/app/?service=page&page=NewsPage&articleid=349463] Despite Legace's numbers, the Blues failed to qualify for the playoffs for the third consecutive season.