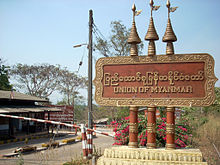 The Burmese-Thai border checkpoint at the Three Pagodas Pass.

The pass links the town of Sangkhla Buri in the north of Kanchanaburi Province, Thailand, to the town of Payathonsu in the south of Kayin State, Myanmar.

The pass is popular with tourists, who are allowed to obtain a one-day visa from the Thai side to visit Payathonsu. Attractions on the Burmese side include wooden furniture, jade carvings, and textiles. Thai tourists are allowed in as of 2011, while other tourists are not.[citation needed]

This pass has been the main land route into western Thailand since ancient times, and is believed be the point at which Buddhist teachings reached the country from India in the 3rd century. During the Ayutthaya period in Thai history (14th-18th centuries), the pass was the main invasion route for the Burmese, but at times was also used against them by Siamese armies. The first of such was the Burmese invasion in 1548, which was part of the Burmese–Siamese War of 1548. The pass is named for three small, crumbling pagodas (chedis) which were probably built at the end of this period as a symbol of peace. They are now on the Thai side of the border. Parts of the border are still disputed.

During World War II, Japan built the infamous Death Railway (officially Taimen - Rensetsu Tetsudo) through the pass. There is a memorial to commemorate the thousands of Australian prisoners of war who (with other Allied prisoners and Asian civilians) died as forced labourers in the construction of the railway.

The region is home to several hill tribes, including Karens and Mons, who are unable or unwilling to obtain citizenship from either countries. Separatist armies have repeatedly tried to take seize of the pass from Burma, with the Mons in effective control until 1990, when Burmese troops regained it.