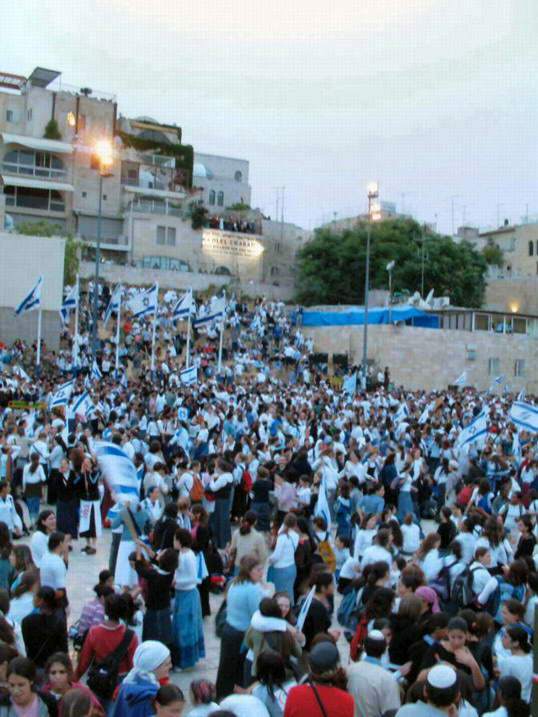 Jerusalem Day ( _he. יום ירושלים, "Yom Yerushalayim") is an Israeli national holiday commemorating the reunification of and the establishment of Israeli control over the Old City in 1967.

The day is marked by state ceremonies, memorial services for soldiers who died in the battle for Jerusalem, parades through downtown Jerusalem, reciting the prayer in synagogues,

s in the community do not celebrate Jerusalem Day and other national celebrations because of their refusal to acknowledge the jurisdiction of Israel as a secular state. [http://www.jpost.com/servlet/Satellite?cid=1209627042527&pagename=JPost/JPArticle/ShowFull] Religious Zionists in Israel regard Yom Yerushalayim as even more important than . [ [http://www.jewishvirtuallibrary.org/jsource/Judaism/yomyerushalayim.html Yom Yerushalayim - Jerusalem Day ] ]

residents of Jerusalem (36% of the municipal population in 2007) also do not celebrate the holiday. For these municipal citizens of Israel, Jerusalem Day denotes the loss of citizenship and their disenfranchisement in the Jewish Israeli state. [ [http://www.nytimes.com/2007/05/13/weekinreview/13myre.html?_r=1&oref=slogin Israel - Jews - Arabs - New York Times ] ]

Under the , which proposed the establishment of two states in Palestine - a Jewish state and an Arab state - was to be an international city, neither exclusively Arab nor Jewish for a period of ten years, at which point a referendum would be held by Jerusalem residents to determine which country to join. The Jewish leadership accepted the plan, including the internationalization of Jerusalem, but the Arabs turned it down. [ [http://www.passia.org/seminars/2000/israel/part3.html The Palestinian Academic Society for the Study of International Affairs (PASSIA) ] ]

As soon as Israel declared its independence in 1948, it was attacked "en masse" by its Arab neighbours. took over east Jerusalem and the Old City. i forces made a concerted attempt to dislodge them, but were unable to do so. By the end of the Jerusalem was left divided between and . The Old City and continued to be occupied by Jordan, and the Jewish residents were forced out. Under Jordanian rule, the Old City's fifty-eight synagogues were demolished and the Jewish cemetery on the Mount of Olives was plundered for its tombstones, which were used as paving stones and building materials. [ [http://www.forward.com/articles/11976/ A New Ruin Rising - Forward.com" ] ] The area around the Western Wall was turned into a public dump.

This state of affairs changed in 1967 as a result of the . Before the start of the war, Israel sent a message to King Hussein of Jordan saying that Israel would not attack Jerusalem or the West Bank as long as the Jordanian front remained quiet. Urged by Egyptian pressure and based on misleading intelligence reports, Jordan began shelling civilian locations in Israel Fact|date=July 2008 to which Israel responded on June 6 by opening the eastern front. The following day, , (28 Iyar 5727), Israel captured the Old City of Jerusalem.

Later that day, Defense Minister declared what is often quoted during Yom Yerushalayim: [ [http://www.pmo.gov.il/PMO/Archive/Speeches/2006/05/speechjeru250506.htm Prime Minister speech] ] [ [http://www.knesset.gov.il/holidays/heb/jer1.htm Knesset speeches] ] :This morning, the Israel Defense Forces liberated Jerusalem. We have united Jerusalem, the divided capital of Israel. We have returned to the holiest of our holy places, never to part from it again. To our Arab neighbors we extend, also at this hour—and with added emphasis at this hour—our hand in peace. And to our Christian and Muslim fellow citizens, we solemnly promise full religious freedom and rights. We did not come to Jerusalem for the sake of other peoples' holy places, and not to interfere with the adherents of other faiths, but in order to safeguard its entirety, and to live there together with others, in unity. [ [http://www.mfa.gov.il/MFA/Jerusalem+Capital+of+Israel/40th+Anniversary+of+the+Reunification+of+Jerusalem.htm?DisplayMode=print-- 40th Anniversary of the Reunification of Jerusalem] Israeli Ministry of Foreign Affairs, 16 May 2007]

The war ended with a ceasefire on , .

On , , the government proclaimed a new holiday - Jerusalem Day - to be celebrated on the 28th of Iyar, the Hebrew date on which the divided city of Jerusalem became one. On , , the Knesset passed the Jerusalem Day Law, making the day a national holiday.

One of the themes of Jerusalem Day, based on a verse from the Book of Psalms, is "Ke'ir shechubra la yachdav" - "Built-up Jerusalem is like a city that was joined together" (Psalm 122:3).

In 1949, the two leading Lithuanian-style Haredi yeshivas in Israel, and Hevron, instituted the recitation of the Hallel prayer on Israel Independence Day. Since then, some Haredim have changed their approach, and reject all national holidays, including Yom Yerushalayim, to distance themselves from what they perceive as a secular and "ungodly" system.

The slogan for Jerusalem Day 2007, marking the 40th anniversary of the reunification of Jerusalem, was "Mashehu Meyuhad leKol Ehad" ( _he. משהו מיוחד לכל אחד, "Something Special for Everyone"), punning on the words "meyuhad" (special) and "me'uhad" (united). To mark the anniversary, the approach to Jerusalem on the Jerusalem-Tel Aviv highway was illuminated with decorative blue lighting which remained in place throughout the year.