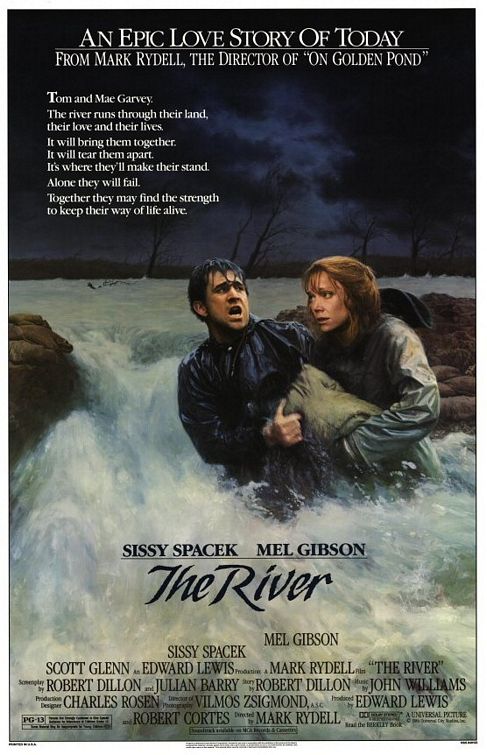 
"The River" is a 1984 which tells the story of a struggling farm family in the Tennessee valley trying keep its farm going in the face of bank foreclosures, floods, and other hard times. The father faces the dilemma of having to work as a scab in a steel mill to keep his family farm from foreclosure. The film was based on the true story of farmers who unknowingly took the jobs as scabs at a steel mill after their crops were destroyed by rain. It stars , , and .

The movie was written by and . It was directed by .

It was nominated for Best Actress in a Leading Role (Sissy Spacek), Best Cinematography, Best Music, Original Score and Best Sound. It also received a special Oscar for editing.

Director viewed the characters in this drama as iconically American, and he was eager to cast as the farm wife because of her performance in "" and her home on a farm in near . Rydell said, "She is the consummate American rural young woman, with strength and fiber and a luminous quality." begged Rydell to let him play the farmer who reminded him of his father, but the director was reluctant because of Gibson’s Australian accent. Before Gibson left for to film "", he begged Rydell not to cast the part yet. Rydell recalled, "He came back and he came to my house in and started reading the script, talking, reading the newspaper, in this perfect accent. I was really impressed, even when he stood next to Sissy, who's like a tuning fork when it comes to accents, he had damn well done it."

"The River" was filmed in eastern in the Holston Valley area. The filmmakers purchased 440 acres along the for the farm set and planted corn. The cast and their families moved to the area a month before the start of production to connect with the local people and learn farming skills. The floods in the film were supplied by the and the with water from the dam. The bank scene was filmed in he town of . The film was completed for under $18 million. [cite news | title = How “The River” Came to the Screen | author = Ester B. Fein | publisher = | date = ] [cite news | title = U.S. Film Maker Casts Dubbed Voices in His Films | author = Bob Thomas | publisher = | date = ]

The musical score was by and also featured songs by country artists including .

"The River" was the last of three 1984 films, including "The Country" and "", that shared the themes of a family's devotion to their farm, the destructive force of nature, an unsympathetic bureaucracy and a determined woman who binds her family together. The film received mixed reviews. later regretted that his portrayal of Tom Garvey was so stubborn that the audience lost sympathy, and he said that he was miscast for the role because he was too young and "pretty" at the time.