Cuscuta
This article is about the plant. For the waterway, see River Dodder.

Cuscuta (Dodder) is a genus of about 100-170 species of yellow, orange or red (rarely green) parasitic plants. Formerly treated as the only genus in the family Cuscutaceae, recent genetic research by the Angiosperm Phylogeny Group has shown that it is correctly placed in the morning glory family, Convolvulaceae. The genus is found throughout the temperate to tropical regions of the world, with the greatest species diversity in subtropical and tropical regions; the genus becomes rare in cool temperate climates, with only four species native to northern Europe.

Dodder can be identified by its thin stems appearing leafless, with the leaves reduced to minute scales. From mid-summer to early autumn, the vines can produce small fruit that take the same color as the vine, and are approximately the size of a common pea. It has very low levels of chlorophyll; some species such as Cuscuta reflexa can photosynthesize slightly, while others such as C. europaea are entirely dependent on the host plants for nutrition.[2] 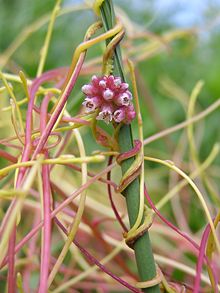 Dodder flowers range in color from white to pink to yellow to cream. Some flower in the early summer, others later, depending on the species. The seeds are minute and produced in large quantities. They have a hard coating, and can survive in the soil for 5–10 years or more.

Dodder seeds sprout at or near the surface of the soil. While dodder germination can occur without a host, it has to reach a green plant quickly; dodder grows toward the smell of nearby plants.[1] If a plant is not reached within 5 to 10 days of germination, the dodder seedling will die. Before a host plant is reached, the dodder, as other plants, relies on food reserves in the embryo; the cotyledons, though present, are vestigial.[3] 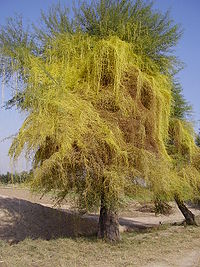 After a dodder attaches itself to a plant, it wraps itself around it. If the host contains food beneficial to dodder, the dodder produces haustoria that insert themselves into the vascular system of the host. The original root of the dodder in the soil then dies. The dodder can grow and attach itself to multiple plants. In tropical areas it can grow more or less continuously, and may reach high into the canopy of shrubs and trees; in temperate regions it is an annual plant and is restricted to relatively low vegetation that can be reached by new seedlings each spring.

Dodder is parasitic on a very wide variety of plants, including a number of agricultural and horticultural crop species, such as alfalfa, lespedeza, flax, clover, potatoes, chrysanthemum, dahlia, helenium, trumpet vine, ivy and petunias, among others.

Dodder ranges in severity based on its species and the species of the host, the time of attack, and whether any viruses are also present in the host plant. By debilitating the host plant, dodder decreases the ability of plants to resist virus diseases, and dodder can also spread plant diseases from one host to another if it is attached to more than one plant.

A report published in Science (Vol 313; Sept. 29, 2006) by Runyon, Mescher, and De Moraes, researchers at Penn State University, demonstrates that dodder use airborne volatile organic compound cues to locate their host plants. Seedlings of Cuscuta pentagona exhibit positive growth responses to volatiles released by tomato and other species of host plants. When given a choice between volatiles released by the preferred host tomato and the non-host wheat, the parasite exhibited preferential growth toward the former. Further experiments demonstrated attraction to a number of individual compounds released by host plants and repellance by one compound released by wheat. These results do not rule out the possibility that other cues (e.g., light) may also play a role in host location.[4][5][6] 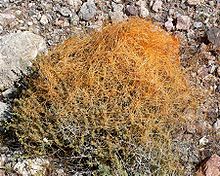 This dodder is engulfing a sage in the Mojave Desert.

Many countries have laws prohibiting import of dodder seed, requiring crop seeds to be free of dodder seed contamination. Before planting, all clothes should be inspected for dodder seed when moving from an infested area to a non-infested crop. When dealing with an infested area, swift action is necessary. Recommendations include planting a non-host crop for several years after the infestation, pulling up host crops immediately, particularly before the dodder produces seed, and use of preemergent herbicides like Dacthal in the spring. Examples of non-host crops include grasses and many other monocotyledons. If dodder is found before it chokes a host plant, it may be simply removed from the soil. If choking has begun, the host plant must be pruned significantly lower than the dodder, as dodder is versatile and can grow back if present from haustoria.

The petroleum ether extract of C. reflexa may be useful in treatment of androgen induced alopecia by inhibiting the enzyme 5alpha-reductase.[9]

C. Chinensis seeds (Chinese=Tu-Si-Zi) have long been used for the treatment of osteoporosis in China and some Asian countries.Kaempferol and hyperoside may be the active compounds that have osteogenic effect.[10]

C. Chinensis is a commonly used traditional Chinese medicine to nourish the liver and kidney.[11]