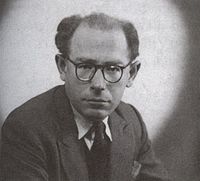 In mathematics, non-standard calculus is the modern application of infinitesimals, in the sense of non-standard analysis, to differential and integral calculus. It provides a rigorous justification for some arguments in calculus that were previously considered merely heuristic.

Calculations with infinitesimals were widely used before Karl Weierstrass sought to replace them with the (ε, δ)-definition of limit starting in the 1870s. (See history of calculus.) For almost one hundred years thereafter[citation needed], many mathematicians viewed infinitesimals as being naive and vague or meaningless.[1]

Contrary to such views, Abraham Robinson showed in 1960 that infinitesimals are precise, clear, and meaningful, building upon work by Edwin Hewitt and Jerzy Łoś. According to Jerome Keisler, "Robinson solved a three hundred year old problem by giving a precise treatment of infinitesimals. Robinson's achievement will probably rank as one of the major mathematical advances of the twentieth century."[2]

To calculate the derivative

of the function y = f(x) = x2 at x, both approaches agree on the algebraic manipulations:

" be the relation being infinitely close.

In order to make f ' a real-valued function, we must dispense with the final term Δx. In the standard approach using only real numbers, that is done by taking the limit as Δx tends to zero. In the non-standard approach using hyperreal numbers, the quantity Δx is taken to be an infinitesimal, a nonzero number that is closer to 0 than to any nonzero real. The manipulations displayed above then show that Δy / Δx is infinitely close to 2x, so the derivative of f at x is then 2x.

Discarding the "error term" is accomplished by an application of the standard part function. Dispensing with infinitesimal error terms was historically considered paradoxical by some writers, most notably George Berkeley.

The hyperreals can be constructed in the framework of ZFC, the standard axiomatisation of set theory used elsewhere in mathematics. To give an intuitive idea for the hyperreal approach, note that, naively speaking, non-standard analysis postulates the existence of positive numbers ε which are infinitely small, meaning that ε is smaller than any standard positive real, yet greater than zero. Every real number x is surrounded by an infinitesimal "cloud" of hyperreal numbers infinitely close to it. To define the derivative of f at a standard real number x in this approach, one no longer needs an infinite limiting process as in standard calculus. Instead, one sets

where st is the standard part function, yielding the real number infinitely close to the hyperreal argument of st, and f * is the natural extension of f to the hyperreals.

Here to be precise, f would have to be replaced by its natural hyperreal extension usually denoted f* (see discussion of Transfer principle in main article at non-standard analysis).

for the relation of being infinitely close as above, the definition can be rewritten in an even shorter form as follows:

A function f is continuous at x if whenever

The above requires fewer quantifiers than the (ε, δ)-definition familiar from standard elementary calculus:

A function f on an interval I is uniformly continuous if its natural extension f* in I* has the following property (see Keisler, Foundations of Infinitesimal Calculus ('07), p. 45):

for every pair of hyperreals x and y in I*, if

The localness of the hyperreal definition can be illustrated by the following three examples.

Example 1: a function f is uniformly continuous on the semi-open interval (0,1], if and only if its natural extension f* is continuous (in the sense of the formula above) at every positive infinitesimal, in addition to continuity at the standard points of the interval.

Example 2: a function f is uniformly continuous on the semi-open interval [0,∞) if and only if it is continuous at the standard points of the interval, and in addition, the natural extension f* is continuous at every positive infinite hyperreal point.

Example 3: similarly, the failure of uniform continuity for the squaring function

is due to the absence of continuity at a single infinite hyperreal point, see below.

Concerning quantifier complexity, the following remarks were made by Kevin Houston:[3]

The fact that a continuous function on a compact interval I is necessarily uniformly continuous (the Heine–Cantor theorem) admits a succinct non-standard proof. Let x, y be hyperreals in (the natural extension of) I. Since I is bounded, both x and y admit standard parts. Since I is closed, st(x) and st(y) belong to I. If x and y are infinitely close, then by the triangle inequality, they have the same standard part

Since the function is assumed continuous at c, we have

and therefore f(x) and f(y) are infinitely close.

Why is the squaring function not uniformly continuous?

is infinitely close to N. Meanwhile, the difference

is not infinitesimal. Therefore the squaring function is not uniformly continuous, according to the definition in uniform continuity above.

A similar proof may be given in the standard setting (Fitzpatrick 2006, Example 3.15).

While the thrust of Robinson's approach is that one can dispense with the limit-theoretic approach using multiple quantifiers, the notion of limit can be easily recaptured in terms of the standard part function st, namely

Given a sequence of real numbers

we say L is the limit of the sequence and write

if for every infinite hypernatural n, we have st(xn)=L (here the extension principle is used to define xn for every hyperinteger n).

To show that a real continuous function f on [0,1] has a maximum, let N be an infinite hyperinteger. The interval [0, 1] has a natural hyperreal extension. The function ƒ is also naturally extended to hyperreals between 0 and 1. Consider the partition of the hyperreal interval [0,1] into N subintervals of equal infinitesimal length 1/N, with partition points xi = i /N as i "runs" from 0 to N. In the standard setting (when N is finite), a point with the maximal value of ƒ can always be chosen among the N+1 points xi, by induction. Hence, by the transfer principle, there is a hyperinteger i0 such that 0 ≤ i0 ≤ N and

for all i = 0, …, N (an alternative explanation is that every hyperfinite set admits a maximum). Consider the real point

where st is the standard part function. An arbitrary real point x lies in a suitable sub-interval of the partition, namely

, so that st(xi) = x. Applying st to the inequality

. By continuity of ƒ we have

As another illustration of the power of Robinson's approach, we present a short proof of the intermediate value theorem (Bolzano's theorem) using infinitesimals.

The proof proceeds as follows. Let N be an infinite hyperinteger. Consider a partition of [a,b] into N intervals of equal length, with partition points xi as i runs from 0 to N. Consider the collection I of indices such that f(xi)>0. Let i0 be the least element in I (such an element exists by the transfer principle, as I is a hyperfinite set; see non-standard analysis). Then the real number

is the desired zero of f. Such a proof reduces the quantifier complexity of a standard proof of the IVT.

Theorem. Let f be a real-valued function defined on an interval [a, b]. Then f is differentiable at a < x < b if and only if for every non-zero infinitesimal h, the value

is independent of h. In that case, the common value is the derivative of f at x.

This fact follows from the transfer principle of non-standard analysis and overspill.

Note that a similar result holds for differentiability at the endpoints a, b provided the sign of the infinitesimal h is suitably restricted.

For the second theorem, we consider the Riemann integral. This integral is defined as the limit, if it exists, of a directed family of Riemann sums; these are sums of the form

Theorem. Let f be a real-valued function defined on an interval [a, b]. Then f is Riemann-integrable on [a, b] if and only if for every internal mesh of infinitesimal width, the quantity

is independent of the mesh. In this case, the common value is the Riemann integral of f over [a, b].

One immediate application is an extension of the standard definitions of differentiation and integration to internal functions on intervals of hyperreal numbers.

An internal hyperreal-valued function f on [a, b] is S-differentiable at x, provided

exists and is independent of the infinitesimal h. The value is the S derivative at x.

Theorem. Suppose f is S-differentiable at every point of [a, b] where b − a is a bounded hyperreal. Suppose furthermore that

Then for some infinitesimal ε

To prove this, let N be a non-standard natural number. Divide the interval [a, b] into N subintervals by placing N − 1 equally spaced intermediate points:

from which the result follows.