William, Prince of Orange
For other princes of Orange or Orange-Nassau called William, see William of Orange (disambiguation)

Prince William was the eldest son of King William III of the Netherlands and his first wife, Princess Sophie of Württemberg. His nickname was Wiwill. At his birth, he held the third position in the line of succession to the Dutch throne and the seventeenth position in the line of succession to the British throne. A month afterwards on 7 October 1840, his great-grandfather, the reigning King William I of the Netherlands, abdicated the throne due to the disappointment over the recent Treaty of London, which recognised the independence of Belgium (previously provinces of the United Kingdom of the Netherlands), and the intention of marrying a Roman Catholic and Belgian noblewoman, Henrietta d'Oultremont. In 1849, after the death of his grandfather King William II of the Netherlands, he became the heir apparent. His Victorian upbringing turned out to be a disaster.

In 1857, he was appointed the 87th Grand Cross of the Order of the Tower and Sword. 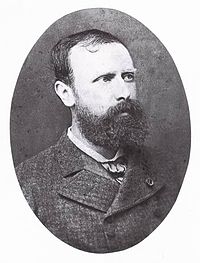 The Prince of Orange at a later age

After the failed plans for a marriage between Prince William and Princess Alice of the United Kingdom, the second daughter of Queen Victoria, the prince fell in love with the 19-year-old Countess Mathilde van Limburg-Stirum in 1873. The relationship between the prince and his parents became very problematic, as his parents refused William's wish to accept Mathilde as his bride in 1874. By the standards of the Dutch royal family, a marriage between a member of the royal family and a member of the nobility was considered unequal and therefore unacceptable. The 33-year-old William wanted to marry, if necessary, without the consent of his parents. However, Mathilda was not yet twenty and therefore permission was needed from her parents too. Unfortunately, they denied permission and the prince's attempt to marry Mathilda failed.

Heavily disillusioned, Prince William then went into exile in Paris, where he threw himself into a life of sex, drinking and gambling. Henriette Hauser, his Parisian mistress, gave the Prince of Orange the pet name "Lemon", something that led to him being known in the Parisian boulevard papers as the "Prince of Lemon" when they reported about his debauched and scandalous lifestyle. Prince William died at the age of 38 in his apartment in the Rue Auber, near the Paris Opera from a combination of typhus, liver complaints and total exhaustion. On 26 June 1879 his body was entombed in the royal crypt at the New Church of Delft. On his coffin there was a wreath from French Empress Eugénie and one from the British Prince of Wales (later King Edward VII).

After his death, his brother Prince Alexander became heir and Prince of Orange. However he also died before their father, who was now without direct male heirs. Neither his uncle, Prince Henry nor his great-uncle, Prince Frederick, had any male issue as well. The States-General adopted agnatic-cognatic primogeniture making his half sister, Princess Wilhelmina, heiress presumptive. Up until 1884, the Dutch throne used Salic Law. Princess Wilhelmina succeeded upon their father's death in 1890.