Glaze is a layer or coating of a vitreous substance which has been fired to fuse to a ceramic object to color, decorate, strengthen or waterproof it.[1]

Glazing is functionally important for earthenware vessels, which would otherwise be unsuitable for holding liquids due to porosity. Glaze is also used on functional and decorative stoneware and porcelain. In addition to the functional aspect of glazes, aesthetic concerns include a variety of surface finishes, including degrees of gloss and matte, variegation and finished color. Glazes may also enhance an underlying design or texture which may be either the "natural" texture of the clay or an inscribed, carved or painted design. 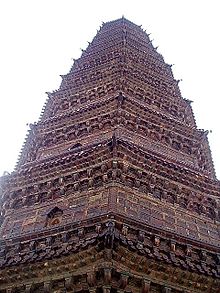 The Iron Pagoda in Kaifeng, China, built in 1049 during the Song Dynasty.

Glaze is used on building materials. The Iron Pagoda, built in 1049 in Kaifeng, China, of glazed bricks is an example.[2]

Ceramic glazes generally contain silica to form glass, in combination with a mixture of metal oxides such as sodium, potassium and calcium which act as a flux and allow the glaze to melt at a particular temperature, alumina (usually from added clay) to stiffen the glaze and prevent it from running off the piece, colorants such as iron oxide, copper carbonate or cobalt carbonate, and sometimes opacifiers such as tin oxide or zirconium oxide. 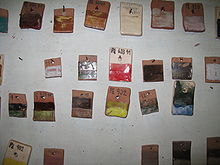 Glaze may be applied by dry dusting a dry mixture over the surface of the clay body or by inserting salt or soda into the kiln at high temperatures to create a sea of sodium vapor that interacts with the aluminium and silica oxides in the body to form and deposit glass (see Salt glaze pottery). Liquid glazes—suspensions of various powdered minerals, and metal oxides—can be applied by dipping pieces directly into the glaze, pouring the glaze over the piece, spraying it onto the piece with an airbrush or similar tool, with a brush, or with any tool that will achieve the desired effect.[citation needed]

To prevent the glazed article sticking to the kiln during firing either a small part of the item is left unglazed or special refractory supports, kiln spurs, are used as supports which are removed and discarded after the firing. Small marks left by these spurs can sometimes be visible on finished ware.

Decoration applied under the glaze on pottery is generally referred to as underglaze. Underglazes are applied to the surface of the pottery, which can be either raw, "greenware", or "bisque" fired (an initial firing of some articles before the glazing and re-firing). A wet glaze—usually transparent—is applied over the decoration. The pigment fuses with the glaze, and appears to be underneath a layer of clear glaze. An example of underglaze decoration is the well-known "Blue and white porcelain" porcelain famously produced in England, The Netherlands, China and Japan. The striking blue color is achieved by using the powerful colorant cobalt in the form of either cobalt oxide or cobalt carbonate, both of which are still commonly used in glaze decoration today[3]. 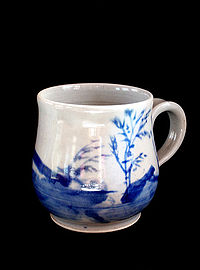 Decoration applied on top of a layer of glaze is referred to as overglaze. Overglaze methods include applying one or more layers or coats of glaze on a piece of pottery or by applying a non-glaze substance such as enamel or metals (i.e., gold leaf) over the glaze.

Overglaze colors are low-temperature glazes that give ceramics a more decorative, glassy look. A piece is fired first, overglaze is applied, and it is fired again. Once the piece is fired and comes out of the kiln, its texture becomes smoother because of the glaze.

During the Kofun period of Japan, Sue ware was decorated with greenish natural ash glazes. From 552 to 794 AD, differently colored glazes were introduced. The three colored glazes of the Tang Dynasty were frequently used for a period, but were gradually phased out; the precise colors and compositions of the glazes have not been recovered. Natural ash glaze, however, was commonly used throughout the country.

From between the eighth century, the use of glazed ceramics was prevalent in Islamic art and Islamic pottery, usually assuming the form of elaborate pottery.[4] Tin-opacified glazing was one of the earliest new technologies developed by the Islamic potters. The first Islamic opaque glazes can be found as blue-painted ware in Basra, dating to around the 8th century. Another significant contribution was the development of stoneware, originating from 9th century Iraq.[5] Other centers for innovative ceramic pottery in the Islamic world included Fustat (from 975 to 1075), Damascus (from 1100 to around 1600) and Tabriz (from 1470 to 1550).[6]

In the 13th century, flower designs were painted with red, blue, green, yellow, and black overglazes. Overglazes became very popular because of the polished look they gave ceramics.