The Desert Tree Frog or Little Red Tree Frog (Litoria rubella) is a tree frog native to Australia and southern New Guinea. It is one of Australia's most widely distributed frogs, inhabiting northern Australia, including desert regions and much of temperate eastern Australia. It is one of the few Australian tree frogs which inhabits arid, tropical and temperate climates.

The Desert Tree Frog is rotund, with a small, flat head. It has short arms, and strong, short legs. Adults: 28-43 mm. Its ventral surface is white, and the dorsal surface ranges from light grey to dark red, and has small black flecks. Adult specimens from Cooktown, Queensland, often show a pronounced metallic sheen on the dorsal surface ranging in colour from bronze to gold. A dark band runs from the snout, through the eye and along the flanks of the frog. The throat of males in breeding season is a dark grey colour. The groin is lemon-yellow, and the tympanum is visible. Baby frogs have an almost transparent abdomen allowing a clear view of their abdominal organs.

The wide distribution and large range of habitats the Desert Tree Frog inhabits creates large variation in breeding habits. Populations which live in temperate or tropical zones breed annually during the wet season or summer. However, the populations in desert regions will breed whenever rain occurs. Tadpole development is dependent on the temperature of the water. Small amounts of water heat to higher temperatures, which triggers the tadpoles to develop faster; some will develop in just 14 days.

Unlike most desert frogs, the Desert Tree Frog does not burrow to avoid heat and desiccation. It will seek out shelter under rocks, trees or leaf litter. Desert Tree Frogs are commonly found around human dwellings, where water is available, and can be found in sinks or drain pipes. 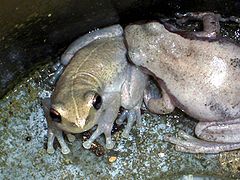