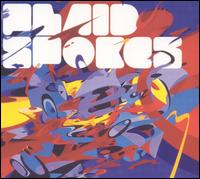 "Spokes" is an album released by Plaid in 2003. Advanced press hinted that it would be a return to the sounds of The Black Dog.Fact|date=April 2007

Warp Records hosted a Flash-based mini-site for Spokes, with abstract graphics like those on the album art. The page featured a five by seven array of spoked wheel-like graphics, and previews for six of the album tracks. When the spoke icons were clicked, seemingly random characters in the Spokes font would appear, one for each of the five columns. The first icon clicked would start a background song that was not included in the album, and repeated clicking of icons would display different letters. If the letters AWOTM were displayed by clicking on the spokes, a download link would appear, allowing you to download ZIP-compressed file. The MP3 was Awotm, the same track that was played when the spoke icons were clicked. This track has not been included on any Plaid album to date.