Noir (ノワール, Nowāru?) is a 26-episode Japanese anime television series produced in 2001 by the Bee Train animation studio. Kōichi Mashimo directed Noir, it was written by Ryoe Tsukimura, and the soundtrack was composed by Yuki Kajiura. The DVD version was released by ADV Films in North America and the United Kingdom and by Madman Entertainment in Australia and New Zealand.

The series follows the story of two young female assassins who embark together on a personal journey to seek answers about mysteries from their past. While at first they seem to be only vaguely related to each other, there are clues and hints given throughout the series that there are more than meets their eyes. During the course of the series, they are lured into more and more traps by a secret organization named Les Soldats ("The Soldiers" in French).

The series follows the story of two young female assassins, the Corsican Mireille Bouquet and the Japanese amnesiac Yumura Kirika, who embark together on a personal journey to seek answers about mysteries concerning their past. While at first they seem to be only vaguely related to each other, there are clues and hints given throughout the series that there is more going on behind the scenes than at first glance.

In their journey to learn more about Yumura's lost memories and her connection to Bouquet, the two form an alliance and begin performing assassinations under the code name "Noir." During the course of the series, they are lured into more and more traps by a secret organization named Les Soldats ("The Soldiers" in French). Les Soldats are a secret organization that has been a part, yet separate group of humanity. It is this hidden group that created and once completely controlled the deadly duo "Noir." Each time that Les Soldats soldiers are sent to kill Bouquet and Yumura, it is considered a test as to whether or not the young women are suitable to carry the title "Noir." 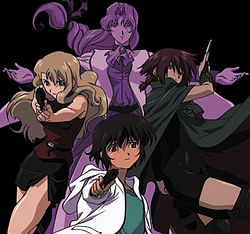 Unlike its spiritual successor Madlax, Noir is mainly about reality's criminal underworld while Madlax is about supernatural events. Mireille and Kirika, in episode four, check the profile of a fifteen-year-old student named Rosaly Hammond, discovering that she was born in 1994. As Rosaly would be turning sixteen, Noir thus takes place approximately between 2009 and 2010.[4]

Les Soldats ("The Soldiers" in French) is a mysterious organisation in Noir. According to Altena, a thousand years ago, a group of people who had survived a bloody war that cost a numerous lives, formed a group called Les Soldats to protect the weak and take revenge on the world.[5] When Kirika travels to a Soldats' village, she finds out that during the late tenth century, Les Soldats has taken place in every social part of humankind. For example, Soldats were witnessed the birth of the Greone's mafia family which was created 200 years ago from the time the series began.[6] Near the end of the series, Altena states that "Les Soldats" has been consumed by the very greed they once swore to undo, and thus had become like the world itself.[original research?]

Although the Soldats were founded by a united group, in Noir its members were separated into two groups: Altena's followers and her opposers, the Soldats' Council members. For easy identification, Altena's followers are mostly people who dress up as nuns[7] and common villagers who are skilled at fighting[8] while her opposers are mainly men in black suits. The Soldats' Council are the people who disagreed with Altena's opinions; while Altena and Chloe are trying to protect Mireille and Kirika, the Council is trying to do the opposite. It contains five members,[9] and one of them, Remy Brefford, invites Mireille to join their ranks, and he has his own building in Paris.[10] The Council perhaps ironically has the power and force to punish those who fail them, even Altena.[original research?]

Altena's followers are mostly nuns and priestesses; though they often appear to be ordinary, petite women, they are capable of using guns and other lethal weapons. Altena lives in a manor not located on any map but is near the border of France and Spain.[8] It is known by name "the place which has been forgotten by time."[citation needed] The manor's structure is similar to those of Ancient Greece and Rome. Separated from the manor by mountains, there is a village which belongs to Altena, and their ancient task is to guard her manor.[original research?]

Noir is the French word for "black". In Noir, it is known as the name of the two maidens who govern death. Pictures and sculptures of the two maidens can be seen on Mireille's father's watch and on Soldats' churches. To the underworld, it is known as the "One Thousand Year" darkness of Europe. According to Altena's story, when the Soldats went under, two hands were left on the surface, so their ancient task is to retrieve the two maidens known as "Noir".[5] The ritual to become Noir takes place under Altena's manor, an underground temple in the style of ancient Greek ruins.

Throughout the series, the only three candidates for "Noir" are Mireille Bouquet, Kirika Yuumura and Chloe. Of all the three, Mireille was the only who was predicted to be neglected, and Kirika probably is the only who can turn into True Noir.[7][8] When one has fallen, the remaining two shall become Noir.

According to the director Kōichi Mashimo, he envisioned Noir and Madlax as part of a trilogy exploring the girls-with-guns genre, and soon after the release of the latter, he confirmed having plans to produce the third installment,[11] which would later become El Cazador de la Bruja.[12]

For Mireille's personal sidearm, Mashimo wanted a gun with "a more modern image", therefore the production staff decided on the Walther P99.[13] After considering several compact pistols, including the Walther PPK and the Glock 26, for Kirika's personal sidearm, the Beretta M1934 became the weapon of choice, because of its "classic, European feel" that suited the premise of the series' story.[14] Because of the organization's premise, European guns were chosen for the members of Les Soldats. The assassins in black suits that are sent after the protagonists throughout the series all carry the SIG Pro 2340, which at the time of production was the newest model of its line, while other members were given increasingly older weapons, depending on the member's rank.[2]

According to producer Shigeru Kitayama, Kotono Mitsuishi's voicing of Mireille was a continuation of the working relationship they had from creating Excel Saga, where Mitsuishi voiced the protagonist Excel.[1]

The 26 episodes of the Noir anime series initially ran from April 6 through September 27, 2001 on TV Tokyo in Japan[15][16] and was released on DVD and VHS in 13 compilations, each containing two episodes, by Victor Entertainment between July 25, 2001 and March 21, 2002.[17] After giving hints, announcements, and retractions for almost a year,[18] ADV Films released the series in English in seven DVD compilations, the first containing five episodes, the others containing three or four episodes, between February 18 and October 28, 2003.[19][20] Prior to that, the first episode was included on the DVD insert of the January 2003 issue of Newtype USA.[21] As of November 1, 2010, the series is now licensed by Funimation Entertainment.[22], which will re-release the series as a part of their Anime Classics line on August 9, 2011.[23]

Like with many of studio Bee Train's other works, the entire Noir soundtrack was composed by the acclaimed Yuki Kajiura, accompanied by primary vocalist Yuriko Kaida, secondary vocalist Yuri Kasahara, and Kajiura's band See-Saw.[citation needed]

Victor Entertainment published a single and three original soundtrack albums for the series. The single, Kopperia no Hitsugi (コッペリアの柩?, lit. Coppelia's Casket) by Ali Project, was published on May 23, 2001.[25] The first and second soundtracks, called Noir: Original Soundtrack I and Noir: Original Soundtrack II, were released on June 21 and October 3, 2001, respectively.[26][27] The third soundtrack, called Blanc dans Noir (〜黒の中の白〜, Kuro no Naka no Shiro?, English: White in Black), was released on November 7, 2001.[28]

A possible live action feature based on the anime series has been planned for development by the cable television network Starz.[29] Sam Raimi and Rob Tapert (Xena: Warrior Princess, Legend of the Seeker) are the executive producers for the project. Stephen Lightfoot will also serve as executive producer and writer.[30]

In June 2011, Starz gave a greenlight to the show with a straight to series order. The number of episodes of the first season has yet to be determined, though some speculated it will likely be in the 8-13 episode range.[31]

Josh Mohs of Active Anime comments that "Noir doesn't fail to deliver mystery, action, and drama." Though he laments "some pacing problems, especially towards the beginning of the series," he lauds the character interactions as well as the series' "job of tying together all its inherent sub-plots" and the director's "bold move" in leaving "the ending open to viewer interpretation."[35] In a review of the first DVD compilation by ADV Films, Jeremy Conrad of IGN lauded the series for being "stylistic", stating that "It oozes style", and for its "extremely cool" fight choreography and "great" shootouts, saying that "What Noir does right is its action." He also noted the series' character design as being "solid" and the series' soundtrack as being "excellent", reminiscent of "Eric Serra's stuff in movies such as La Femme Nikita", but lamented about the slowed pace at the end of the volume, stating that "some of the story stuff they were trying to do [in the fourth and fifth episodes] was snooze inducing."[36]

Josh Mohs of Active Anime comments that Noir's "strong character interactions are usually enough to pull you through" the pacing problems he saw with the series and further states that, along with the series' "unique twists", the "intriguing character dynamic definitely elevate[s] it above the rest of the competition."[35]

Kirika had been voted with Mireille as two of the top ten female anime characters by Newtype Japan in 2001.[37]

Anime News Network's Theron Martin, ten years after the show's original run, commented that Noir "was at least to some degree an influential title" and "is still recognized as one of the preeminent titles of its type because it redefined what a 'girls with guns' title could be." He went on to praise the show for its "sleek, elegant story" and called it "anime's most pronounced homage to classic film noir". He named Mireille and Kiraka "one of anime's most iconic female teams" along with the Dirty Pair and credited Kirika as "a precursor of the moe craze that came along later in the decade." He named "The Lost Kitten" as the series' episode with the best story content, and the double episode "The Intoccabile" as having the worst, noting its "hackneyed look into the Cosa Nostra". He lamented repetitiveness in action sequences and excessive reuse of scenes especially in early episodes as well as the absence of blood in light of the show's high body count. He showed himself unimpressed with the animation quality, but lauded the show's good looks, in particular those of the environments. He named the "tendency for repetitiveness" of its first half as the soundtrack's "only real flaw" and praised the pieces "Salva Nos" and "Canta Per Me" as "stand[ing] among the all-time great anime themes". About the English version, he commented that the "casting choices fit and match up well against the original performances" and that the "script stays tight enough to avoid garnering any accuracy complaints". In conclusion, he said "the series works in the ways that it is supposed to work and should keep viewers thoroughly involved through to the end."[38]