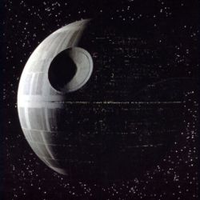 The Death Star in A New Hope

The Death Star is a fictional moon-sized space station and superweapon appearing in the Star Wars movies and expanded universe. It is capable of destroying a planet with a single destructive super charged energy beam.

Although particular details, such as the superlaser's location, shifted between different concept models during production of Star Wars Episode IV: A New Hope, the notion of the Death Star being a large, spherical space station was consistent in all of them.[1] The buzzing sound counting down to the Death Star firing its superlaser comes from the Flash Gordon serials.[2] Portraying an incomplete yet powerful space station posed a problem for Industrial Light & Magic's modelmakers for Star Wars Episode VI: Return of the Jedi. [3] Only the front side of the 137-centimeter model was completed, and the image was flipped horizontally for the final film.[3] Both Death Stars were depicted by a combination of complete and sectional models and matte paintings.[1][3] 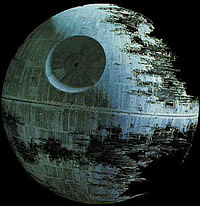 The second Death Star under construction in Return of the Jedi

The original Death Star first appears in A New Hope. Commanded by Grand Moff Tarkin (Peter Cushing), it is the Galactic Empire's "ultimate weapon", a space station capable of destroying a planet with one shot of its superlaser. The film opens with Leia Organa (Carrie Fisher) transporting the station's schematics to the Rebel Alliance to aid them in destroying the Death Star. Tarkin orders the Death Star to destroy Leia's home world of Alderaan in an attempt to pressure her into giving him the location of the secret Rebel base; she gives them a (false) location, but Tarkin has the planet destroyed anyway. Later, Luke Skywalker (Mark Hamill) boards the station with his friends and rescues her; in the film's climactic battle scene, he uses his power in the Force to help him destroy the station.

In Return of the Jedi, set four years later, the Empire is building a new Death Star; it is half-finished throughout the film. Emperor Palpatine (Ian McDiarmid) and Darth Vader (David Prowse/James Earl Jones) send the Rebels false information that the station's weapons systems are not operational in order to lure them into a trap, and bring Skywalker on board to turn him to the dark side of the Force. In the film's climax, Vader throws Palpatine down the station's reactor core, killing him, and is mortally wounded in the process. Skywalker escapes with Vader's body moments before the Rebels destroy the station.

The Death Star explosions featured in the special edition of A New Hope and in Return of the Jedi are rendered with a Praxis effect, wherein a flat ring of matter erupts from the explosion.

The Death Star appears in its unfinished form in Star Wars: The Force Unleashed where the final confrontation between Starkiller, Palpatine and Darth Vader takes place, prompting the rescue and escape of the founders of the Rebel Alliance from execution.

Emperor Palpatine (Ian McDiarmid), left, and Darth Vader watch the construction of the first Death Star in Revenge of the Sith.

Both Death Stars appear throughout the Star Wars Expanded Universe. The first Death Star's construction is the subject of Michael Reaves and Steve Perry's novel Death Star. In LucasArts' Star Wars: Battlefront II, the player participates in a mission to secure crystals used in the Death Star's superlaser. The first Death Star under construction acts as the final stage in the video game, The Force Unleashed. Kevin J. Anderson's Jedi Academy trilogy introduces the Maw Cluster of black holes that protect a laboratory where the Death Star prototype was built (consisting of the super structure, power core, and Super Laser.) National Public Radio's A New Hope adaptation portrays Leia (Ann Sachs) and Bail Organa's (Stephen Elliott) discovery of the Death Star's existence and Leia's mission to steal the space station's schematics. The first level of LucasArts' Dark Forces gives the player a supporting role in Leia's mission, while a mission in Battlefront II tasks the player with acting as a stormtrooper or Darth Vader in an attempt to recover the plans and capture Leia. Steve Perry's novel Shadows of the Empire describes a mission that leads to the Rebels learning of the second Death Star's existence, and that mission is playable in LucasArts' X-Wing Alliance combat flight simulator. Numerous LucasArts titles recreate the movies' attacks on the Death Stars, and the Death Star itself is a controllable weapon in the Rebellion and Empire at War strategy game. A Death Star variation appears in Kevin J. Anderson's novel Darksaber.

The first Death Star is depicted in various sources of having a crew of 265,675, as well as 52,276 gunners, 607,360 troops, 30,984 stormtroopers, 42,782 ship support staff, and 180,216 pilots and support crew.[4] Its hangars contain assault shuttles, blastboats, Strike cruisers, land vehicles, support ships, and 7,293 TIE fighters.[5] It is also protected by 10,000 turbolaser batteries, 2,600 ion cannons, and at least 768 tractor beam projectors.[5] Various sources state the first Death Star has a diameter approximately 140 kilometers.[4][6] There is a broader range of figures for the second Death Star's diameter, ranging from 160 to 900 kilometers.[7][8] In the Disney attraction, Star Tours: The Adventures Continue, guests can travel inside an uncompleted Death Star during one of the randomized ride sequences.

Other uses of the term

A few astronomers sometimes use the term "Death Star" to describe Nemesis, a hypothetical star postulated in 1984 to be responsible for gravitationally forcing comets and asteroids from the Oort cloud toward Earth.[9]

Enron labeled one of the false companies used in its fraudulent manipulation of the California power grid "Death Star".[10]

ILM's principal render farm is named Death Star. The effects house is extremely secretive about the computing power the AMD-powered Death Star possesses, but it is estimated that at one time it employed close to 1500 processors in 750 nodes.

The Death Star is one of the better-known concepts from the Star Wars universe and is widely recognizable outside of that context. 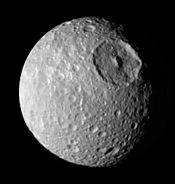 The Saturnian moon Mimas, photographed by the Cassini probe in 2005. The large crater in the center (Herschel) gives it an uncanny resemblance to the Death Star.

In 1981, following the Voyager spacecraft's flight past Saturn, scientists noticed a resemblance between one of the planet's moons, Mimas, and the Death Star.[11]

The video games Sonic the Hedgehog 2, Sonic the Hedgehog 3, and Sonic & Knuckles contain plotlines centered around the "Death Egg", a space station resembling the Death Star, though altered to feature the face of series villain Doctor Eggman. The Death Egg is built as a destructive superweapon; the story revolves around destroying this object. A similar superweapon, the Space Colony ARK (with the Eclipse Cannon), appears in Sonic Adventure 2 and Shadow the Hedgehog.

The Death Star placed ninth in a 2008 20th Century Fox poll of the most popular movie weapons.[12]

In the US, networks that compete with Fox refer to American Idol as the Death Star due to its destructive effects on their schedules and ratings.[13][14]

In Canada, the term "death stars" was used to describe U.S. Direct Broadcast Satellites capable of broadcasting signals into Canada that were not regulated by the Canadian Radio-television and Telecommunications Commission.[15]

The Creative Artists Agency's headquarters has been nicknamed the "Death Star" by the entertainment media.[16]

RAF Mount Pleasant in the Falkland Islands is nicknamed "Death Star" due to its confusing layout.[17]

KTCK (SportsRadio 1310 The Ticket) in Dallas were the first to use the term "Death Star" to describe the new mammoth Cowboys Stadium in Arlington, Texas. The term has since spread to local media and is generally accepted as a proper nickname for the stadium.[18]

Kenner and AMT created a playset and a model, respectively, of the first Death Star.[19][20] In 2005 and 2008, Lego released models of Death Star II and Death Star I, respectively.[21][22] Palitoy created a heavy card version of the Death Star as a playset for the vintage range of action figures in 1979 in the UK, Australia and Canada. Both Death Stars are part of different Micro Machines three-packs.[23][24] The Death Stars and locations in them are cards in Decipher, Inc.'s and Wizards of the Coast's Star Wars Customizable Card Game and Star Wars Trading Card Game, respectively.[25] Hasbro released a Death Star model that transforms into a Darth Vader mech.[26] Estes Industries released a flying model rocket version.[27]