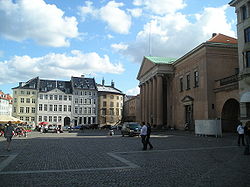 Nytorv with the courthouse to the right

Nytorv (English: New Square or New Market) is a public square in the centre of Copenhagen, Denmark. Together with the adjoining Gammeltorv it forms a common space, today part of the Strøget pedestrian zone. The square is dominated by the imposing Neoclassical façade of the Copenhagen Court House, which from 1815-1905 also served as the City Hall.

The Royal Orphanage as it appeared following an expansion in 1765

Nytorv was created by Christian IV in 1610 when he cleared an area behind the City Hall in connection with his adaptation of the building in a Renaissance style. Nytorv thrived as a marketplace, as did Gammeltorv, which was located on the other side of the city hall. It was at Nytorv that the butchers carried out their work, while most of the sales took place at Gammeltorv. 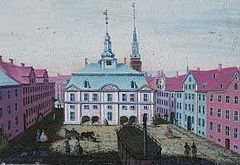 Nytorv with the scaffold painted by Johannes Rach in 1747

Nytorv also became the location of the city's scaffold and a pillory. Pillories were also found at a number of other sites around the city. A permanent scaffold was not constructed until 1627, and in 1728, when the City Hall was rebuilt after the Copenhagen Fire of 1728, an octagonal masonry podium was built.[1]

Between 1728 and 1740, Ludvig Holberg lived in a house on the corner of Gammeltorv and Nygade, on the border between the two squares. In an epigram, originally in Latin, he commented on the dual nature of the site, between posh Gammeltorv, with the Caritas Well (the 'ancient arts'), and Nytorv with its sinister execution facilities:[2]

You ask, in what part of town, I now abide
Two squares quite near, papillae, on the way.
The one Gammel Torv, where ancient arts confide
Fights and theft and fraud and drink and play.
The other Nytorv where a scaffold has been set,
Midway between the two doth Justitia now reign,
So between the doomed and the gallows in duet
I live; my one God, help me 'gainst the twain.

The last executions to be carried out at the scaffold behind the City Hall took place in 1758 when Frederik Hammond, the owner of an iron works in Norway, and his assistant, a Swede named Anders Sundblad, were convicted for producing counterfeit securities for an amount of 35,000 rigsdaler and beheaded.[4] Three years later the scaffold was removed and from then executions only took place at Østerfælled, Vesterfælled and Amagerfælled, though branding and whipping continued at the Nytorv pillory until 1780.

In the Copenhagen Fire of 1795 the City Hall burnt down once again. This time it was not rebuilt at the same site but moved to a larger lot on Nytorv's western side. Since 1728, it had been the location of the Royal Orphanage but this too was lost in the fire and was moved to other locations around the city.

The new building, which was to serve both as a City Hall and a courthouse, was designed by Christian Frederik Hansen, the leading Danish architect of the time. Completed in 1815, the project also included a jailhouse next door, connected to the courthouse by an arch with a passageway.

After the fire, Nytorv and Gammeltorv made up one common space. During the first half of the 20th century, the market activities gradually disappeared from the square which instead became increasingly dominated by cars. This changed in 1962 when the Strøget pedestrian zone was laid out.

The Copenhagen Court House, which from 1815-1905 also served as City Hall

Today Nytorv/Gammeltorv is a lively square in the heart of Copenhagen's old city. During the latest refurbishment of the square, conducted by city architect Otto Käszner in 1993, an octagonal podium was created at the where the scaffold used to be and the footprint of the former city hall was marked in the paving with a paler stone. The podium now serves as a bench or occasionally as a bandstand, for instance during Copenhagen Jazz Festival.