It was founded as the "College of Christ the King" in 1954, and was affiliated with St. Peter's Seminary. The name was changed to King's College in 1966 after it became affiliated with UWO; unlike Brescia and Huron, UWO's other affiliated colleges, King's did not initially adopt the "University College" name, to avoid confusion with the university of the same name in Edmonton. The current name for the campus was adopted in 2004. 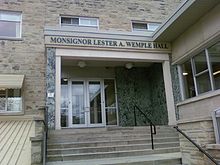 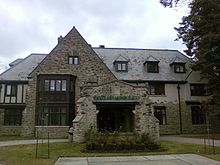 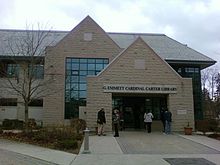 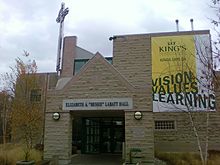 The college was originally located in what is now the Monsignor Wemple Building on the north side of Epworth Avenue, with classrooms, the original Monsignor Wemple Library, chapel, offices, and dining hall located on the lower and ground floor, and living quarters on the upper floors. The college building expanded in 1970 to include two lecture halls and additional classrooms. Additional lecture theatres were located in what is now The Silverwood Annex of the Silverwood mansion on Waterloo Street, now known as Dante Lenardon Hall, named after a well respected emeritus professor [2]. Prior to being used by King's, the mansion was used by the Richard Ivey School of Business and the University of Western Ontario's Faculty of Music. For many years cement music practice buildings remained on site and were used as offices until being demolished to make way for the Faculty Building.

A new, state-of-the-art two-storey library was opened in 1994 along Waterloo Street, adjacent to the mansion. The library is named after Cardinal Carter, formerly Bishop of London. The original library became a student lounge, and the Monsignor Wemple name became the name of the original college building. An additional building, Elizabeth A. “Bessie” Labatt Hall, was opened between the library and mansion in 2003, and features three lecture halls, an auditorium that can be split into three classrooms, faculty offices, and a large atrium. In 2007, a new building of dedicated office space was built behind Dante Lenardon Hall, and is named the Faculty Building.

In 2008, the school purchased and renovated what was the London Hebrew Day School, and formerly the (Middlesex county) pre-city country school known as Broughdale on Epworth Avenue. Now known as Broughdale Hall, the building houses lecture halls, as well as the CultureWorks offices.

In 2010 the school purchased a two story house located near the Cardinal Carter Library. This building has been named International House and will be used to house international exchange students and for meeting space for social events.

As of 2011 the school is fundraising for the building of the Darryl J. King Student Life Centre, a community and recreational centre for the college that will be physically connected to the Cardinal Carter Library.

Students living in residences on campus number approximately 400, and many others live in houses or apartments quite close to the school. The buildings available for students are the upper levels of the Wemple building, Alumni Court that was constructed in the beginning of the 1990s, which until recently was reserved for female residents only. Also available are the townhouses lower down the hill which had their exteriors redone, along with landscaping, in the summer of 2007 and their interiors in 2008. There are ten units in total, with some interconnections existing between 1-3, 4-5, 6-7, and 8-10.

King's has approximately 3600 students, almost all of whom are undergraduates. Programs offered at King's are described fully on the school's website, made available below. Although there is a heavy emphasis on undergraduate studies, there is also a full or part-time graduate program in social work. By virtue of King's affiliation with St. Peter's Seminary, Master of Theological Studies and Master of Divinity degrees are also offered.

For more than ten years King's has maintained a Partnership with CultureWorks ESL, an English as a Second Language school, whose offices are located on site in Broughdale Hall. Students who successfully complete the CultureWorks program are granted entrance to King's. In 2005 nearly 50 graduates of CultureWorks attended King's CultureWorks has funded a scholarship for graduates of its ESL program attending King's [3]

Christ the King University Parish, formerly Holy Spirit Parish, offers Roman Catholic services daily in the chapel at Monsignor Wemple Building, and on Sundays at Elizabeth A. “Bessie” Labatt Hall. These services are intended for and tailored to university students, but are open to the public with several local families in regular attendance.