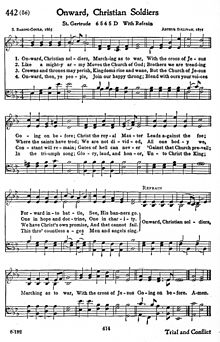 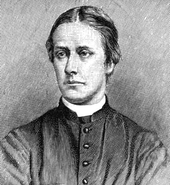 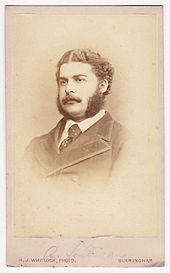 "Onward, Christian Soldiers" is a 19th century English hymn. The words were written by Sabine Baring-Gould in 1865, and the music was composed by Arthur Sullivan in 1871. Sullivan named the tune "St. Gertrude," after the wife of his friend Ernest Clay Ker Seymer, at whose country home he composed the tune.[1][2] The Salvation Army adopted the hymn as its favoured processional.[3] The piece became Sullivan's most popular hymn.[1] The hymn's theme is taken from references in the New Testament to the Christian being a soldier for Christ, for example II Timothy 2:3 (KJV): "Thou therefore endure hardness, as a good soldier of Jesus Christ."

The lyric was written as a processional hymn for children walking from Horbury Bridge, where Baring-Gould was curate, to Horbury St Peter's Church near Wakefield, Yorkshire, at Whitsuntide in 1865. It was originally entitled, "Hymn for Procession with Cross and Banners."[4] According to the Center for Church Music, Baring-Gould reportedly wrote "Onward, Christian Soldiers" in about 15 minutes, later apologizing, "It was written in great haste, and I am afraid that some of the lines are faulty."[5] He later allowed hymn-book compilers to alter the lyrics. For example, The Fellowship Hymn Book, with his permission, changed the phrase "one in hope and doctrine" to "one in hope and purpose." For the 1909 edition of Hymns Ancient and Modern, he changed the fifth line of the same verse from "We are not divided" to "Though divisions harass." However, Baring-Gould’s original words are used in most modern hymnals.

Baring-Gould originally set the lyrics to a melody from the slow movement of Joseph Haydn’s Symphony in D, No. 15. This was printed in 1871 in an English church periodical, the Church Times. The hymn did not receive wide acceptance, however, until Sullivan wrote the tune "St. Gertrude" for it. Sullivan re-used the tune in his Boer War Te Deum, first performed in 1902, after his death. Another hymn sung to the St. Gertrude tune is "Forward Through the Ages", written by Frederick Lucian Hosmer (1840–1929) in 1908.[6]

When Winston Churchill and Franklin Roosevelt met in 1941 on the battleship HMS Prince of Wales to agree the Atlantic Charter, a church service was held for which Prime Minister Churchill chose the hymns. He chose "Onward, Christian Soldiers" and afterwards made a radio broadcast explaining this choice:[7]

We sang "Onward, Christian Soldiers" indeed, and I felt that this was no vain presumption, but that we had the right to feel that we serving a cause for the sake of which a trumpet has sounded from on high. When I looked upon that densely packed congregation of fighting men of the same language, of the same faith, of the same fundamental laws, of the same ideals ... it swept across me that here was the only hope, but also the sure hope, of saving the world from measureless degradation.
—Winston Churchill

The song has been sung at many funerals, including at the funeral of American president Dwight D. Eisenhower at the National Cathedral, Washington, DC, March 1969.[8] Apart from its obvious martial associations, the song has been associated with protest against the established order, as in the cases of civil rights[9] and the attempts to outlaw chiropractry[10].

An attempt was made in 1986 to strip "Onward, Christian Soldiers" from the United Methodist Hymnal due to perceived militarism. Outrage among church goers caused the committee to back down.[11] However, the hymn was omitted from the 1990 hymnal of the Presbyterian Church (USA)[12] and the 1888 Australian Hymn Book, published in 1988, and its successor, Together in Song, published in 1999. The Spiritualists' National Union hymnbook has a variation on the hymn, entitled "Onward, Comrades, Onward".

Largely because of its association with missionaries of various types, the song is sung in a number of movies and television programmes. The 1939 film, Stanley and Livingstone, depicts Dr David Livingstone (played by Sir Cedric Hardwicke) spiritedly leading a choir of African people in this anthem; Henry M. Stanley is played by Spencer Tracy in the movie. The piece appears in several other films, including Major Barbara, Mrs. Miniver, A Canterbury Tale, The Russians Are Coming, the Russians Are Coming, M*A*S*H, Taps, Striptease, The Bushbaby, Walker, Androcles and the Lion, and Flyboys. It is also sung or played in episodes of TV series, including Little House on the Prairie, The Simpsons, Little Britain and Dad's Army.

Onward Christian Soldiers is the title of a 1984 album and song by the British anarcho-punk band Icons of Filth.[13] In the book Sins of the Assassin by Robert Ferrigno, the song is the national anthem of the fictional Bible Belt. In Christopher Webber's 1993 play Dr Sullivan and Mr Gilbert, the hymn is used with new words about Sullivan's rise to fame, and the artistic compromises that entailed.

"Christian Zeal and Activity", a 1973 work by American composer John Adams, is an arrangement of Sullivan's tune.[14] The hymn's tune has also been used as the basis for many parodies, including Lloyd George Knew My Father[15] and Like a mighty tortoise, / Moves the Church of God; / Brothers, we are treading / Where we've always trod.[16]