Jump In! is a 2007 Disney Channel Original Movie, which premiered on January 12, 2007. It was released on Disney Channel UK on April 27, 2007. The film, starring Corbin Bleu and Keke Palmer, revolves around a young boxer, Izzy Daniels (Corbin Bleu), who trains to follow in his father's footsteps by winning the Golden Glove. When his friend, Mary (Keke Palmer), who harbors a secret crush on him, asks him to substitute for a team member in a Double Dutch tournament, then, Izzy discovers his new love for jumping rope and in the meantime, he soon discovers true love in Mary.[1] Filming took place from June–July 2006 in Toronto, Canada.

Seventeen-year-old Izzy Daniels (Corbin Bleu) is a star boxer and the son of a golden-glove champion. His eight year old sister, Karin, is crazy about Double Dutch and Izzy is asked to take Karin and her friends to a Double Dutch competition, where Mary and her team are entering. Izzy has often seen them Double Dutch and is always bothering them, but during the competition he acts out of character, standing and cheering along with everyone else, but he doesn't after his mother's passing.

Izzy has a bitter rivalry with his neighbor Mary (Keke Palmer). They always bother each other whenever they see each other. Mary is a member of the jump team The Joy Jumpers, who place fourth in the tournament. They make the city finals, but when Yolanda, the fourth member of the team, decides to quit and join their rival team, The Dutch Dragons, they face the prospect of forfeiting the tournament. Izzy, after learning of Yolanda's departure, quips "Why, did she finally figure out Double Dutch is lame?" Mary then challenges Izzy to speed jump, and when he does it much better than they expect, they ask him to join the team, but he refuses because of what his friends might think. When the other members of the Joy Jumpers, Keisha and Shauna, ask him to fill in until they find a permanent replacement, he finally relents. His conditions are that they practice before school and in his dad's boxing gym, where no one's going to watch.

Meanwhile, Izzy has a boxing match with Rodney Tyler, the bully, determining who will win the "Golden Gloves", which goes to the best boxer. Izzy beats him, but Rodney doesn't accept it. He claims he just got lucky and pushes Izzy for a rematch. Izzy says no, and walks out of the gym.

Izzy improves tremendously at Double Dutch, and begins to love the sport. He tells the Joy Jumpers that he'd like to be on their team permanently, and they happily agree. Izzy and Mary begin to get along better and eventually they fall in love. One night, Mary kisses Izzy, showing him her true feelings. However, when Rodney finds Izzy jumping Double Dutch before class, he snaps some photos, prints them and hangs them all over the school. He then tells Izzy, "So that's why you won't give me a rematch! 'Cuz you're too busy jumping Double Dutch!" Izzy becomes mad and says he'll do the rematch. Mary tries to convince him not to quit their team but Izzy coldly ignores her and wants nothing more to do with her and the team. Mary is disappointed in him and she leaves.

The only girl boxer, Tammy, understands how Izzy feels. She gives him a pep talk on how she never quit boxing when the guys teased her, and that he shouldn't quit either, just because they made fun of him.

In the middle of the rematch fight, he tells Rodney that he's sick of being mad and that he's not going to let his anger control him. He walks out of the match and Rodney runs after him, intent on beating him up. But he trips on the cords surrounding the ring, giving Izzy a chance to get even. Instead, he just walks out.

Meanwhile, Mary, Keisha and Shauna meet up for the city finals, but without Izzy, they feel like giving up. Izzy then walks in and asks, "What, were you really gonna start without me?" He apologizes and Mary smiles and hands him a uniform. They change their name to the Hot Chili Steppers and all is forgiven as the tournament begins. They get first in the compulsory, then second in speed. This ties them with the Dutch Dragons and the freestyle will determine it all. The Hot Chili Steppers get first, and go on to the State Championship.

After their performance, Izzy notices Rodney in the crowd, and asks him for a truce, which he accepts. Izzy had finally won the respect of his dad Kenneth (David Reivers) and Mary's love.

The narrator in the story was Rodney, who works at the gym teaching boxing to young kids, and often tells them Izzy's story as inspiration. He also states to one of the kids that Izzy and Mary are now a couple. The film closes with Izzy teaching his dad to jump rope with the help of his little sister, Mary and the other girls.

The film was originally set to star Raven Symoné and be named Double Dutch, but due to unknown reasons it was later revamped into Jump In! with Corbin Bleu.

Jump In! is the 69th Disney Channel Original Movie and went into production in 2006. Earlier titles for the film included "Jump", "Jump In" and "Jump Start", with some early trailers even showing the "Jump Start" title.

In the movie, the group that Izzy Daniels is in is called the Hot Chili Steppers. This is an obvious parody of Red Hot Chili Peppers, a real-life rock band. The version in Spanish dubs the name Salto Extrapicante. This led to a failed lawsuit in March 2007[citation needed].

Promotion for the film began in the Summer of 2006, with a poster appearing in the program for the High School Musical Tour. Advertisements highlighted Corbin Bleu's association with High School Musical and ran heavily during re-airings of that film. Several videos from the film were also put into heavy rotation on Disney Channel, airing during breaks in regular programming.

Corbin Bleu became very good at jumping and even performed some of his own stunts like the donkey kick and pushups, but he did have a stunt double for some of the jumping like back flips and individual jumping. At the end of the movie, Andy Royalle makes a guest appearance as one of the jump-ropers. During the final contest, an actual champion Double Dutch team from Brooklyn makes a cameo. They just happened to be in Toronto for a tournament at the same time the movie was being filmed.

Jump In! broke the record previously set by The Cheetah Girls 2 as the highest rated DCOM premiere with 8.2 million viewers.[2] and garnering a 5.4 at the Internet Movie Database. At the time it marked Corbin Bleu's second #1 hit for the Disney Channel and Keke Palmer's first It was later beat out for highest ratings by High School Musical 2 (Corbin Bleu also starred) on August 17, 2007 which gained 17.24 million viewers, making it Bleu's third #1 hit DCOM, compared to Jump In!'s 8.2 million.

The DVD release of Jump In! carried the subtitle "Freestyle Edition" and was released on April 3, 2007. And July 2, 2007 in the United Kingdom.

Special features include the following: 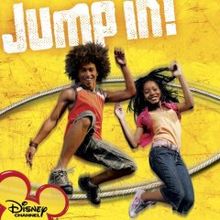 Frank Fitzpatrick composed the original score for the film and wrote and produced 2 songs for the soundtrack, including the single "Jump to the Rhythm", a co-production with Nashville’s Keith Thomas featuring Jordan Pruitt. [2]