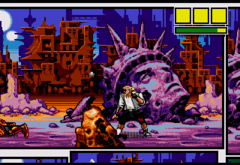 Screenshot from the start of Comix Zone.

Comix Zone is a 1995 arcade-style action game. The game's unique feature is that it is set within the panels of a comic book. Each level consists of two pages and secrets are discovered by shredding the paper and revealing items. The unique dialogue is rendered within talk bubbles with the typical comic font. Sprites and backgrounds possess the bright colors and dynamic drawing style favored by superhero comics.

Comix Zone was criticized for being released too late and for being too hard and short, but it was positively received, and praised for its great gameplay, graphics, and soundtrack[citation needed].

The music was composed by Howard Drossin, a known video game and movie composer. Graphics were done mainly by comic artists[who?].

The game was originally from a concept video animated by Peter Morawiec titled "Joe Pencil Trapped In The Comix Zone". The video was made in 1992, displaying the animation of how the gameplay and the comic book elements would blend in.[citation needed]

Sketch Turner, a "starving artist" and freelance rock musician, is working on his newest comic book, named the "Comix Zone." Comix Zone is the story of the New World Empire's attempt to defend Earth from an invasion of alien renegades, with inspiration coming from Sketch's (oddly vivid) dreams and nightmares.

One night, while Sketch is working on Comix Zone during a thunderstorm, a lightning bolt strikes a panel of his comic. In this instant, the main villain of Comix Zone - a powerful mutant named Mortus - manages to escape the comic book's pages, and hurl the stunned Sketch into the world of Comix Zone. Because he does not possess any power in this reality, Mortus intends to free himself by destroying Sketch in the comic book, and make himself real in the process.

Inside the comic book, Sketch meets General Alissa Cyan, who believes he is a superhero ("the chosen one") who has come to save their post-apocalyptic world from the evil of Mortus and the alien invaders. Ignoring Sketch's protests, Alissa sends him on his mission, keeping in touch with instructions and hints via radio.

Now that Mortus has a physical presence outside of Comix Zone, he is free to change the world as he wishes, simply by drawing in enemies for Sketch to face - or in one instance burn up part of a page.

In the final (and partly unfinished) panel, Sketch finds a nuke ready to launch, and Alissa is working on defusing it. Enraged, Mortus zaps himself back into the Comix Zone and shuts Alissa inside the nuke, which starts to fill with liquid. Sketch must now defeat Mortus for good and try and prevent Alissa from drowning.

There are three episodes in the game, each consisting of two pages in a distinct area (levels):

Sketch Turner: The game's protagonist. He is a comic book artist and rock musician, and is working on the Comix Zone. Sketch is hurled into the Comix Zone by Mortus and must fight his way out by defeating anything put in his way. He briefly transforms into his super hero alter ego after reaching the end of each page. His super hero meter fills up as he makes progress.

Alissa Cyan: General of the New World Empire. She is confronted by Sketch in the command center when he lands in front of her. Alissa believes Sketch is the "Chosen One" and sends him on his mission against alien forces.

Roadkill: Sketch Turner's pet rat in the real world. Sketch finds him teleported into the comic book world and trapped in a cage and rescues him. Roadkill's tail was grazed during the lighting strike, electrifying it and allowing him to shock enemies if he's let free. Often, Roadkill must help his master get past obstacles and find hidden items to solve problems.

Strigil: A shadowed alien renegade. He is known to teleport all around by merging with the ground. He also carries his namesake weapon and uses them to fire blasts or to hook onto bars.

Gravis: A giant, muscled alien renegade. Steam often comes out of the vents on his back. He relies on his ability to generate explosive springs and launch them at his foes.

Styx: A monk found in the Tibetan city. He wields a powerful staff which he uses to either fire blasts or hop upon as a pole.

Mongoria: A dangerous woman warrior who uses a hook attached to her long, braided hair. She also has a fear of mice... sometimes.

Pelagus: This renegade prefers to grasp onto anything used for climbing. His methods of attacking involve slime balls and springs that will turn into mines.

Spawn Mutant: These mutants are spawned from ooze. Try to grab them, and they might become something stronger!

Cocoon Crawler: The source of food for newly spawned mutants, these creatures will try and sting you.

Flying Creature: Not very tough, but these winged mutants can prove to be real nuisances.

Big Mama Dragon: A giant reptilian creature who hangs from the ceiling in the mutant base. She becomes upset after Sketch destroys her children. In the hopes of avenging her slain offspring, she vows to get rid of her foe. This fire-breathing reptile will also chomp at her enemy. The flaming barrel can easily get rid of her. When defeated, Big Mama comes bursting apart.

Kung-Fung: Master of the Temple on the mountains. He is in charge of training Mortus' people to fight in the Tournament. After Sketch comments on his long fingernails, he decides to teach Sketch a lesson. He sends balls of fire into the water on the chamber floor and also launches explosive fingernails at his opponent. Kung-Fung sinks into the water and comes apart.

Mortus: The main villain of the Comix Zone. He emerges from the pages of Sketch's comic after it is hit by lightning. After hurling his creator, Sketch, into the book, Mortus picks up a pen and draws in enemies with it, hoping to kill Sketch so that he can become real. He becomes the final boss when Sketch discovers his plan to launch a nuke upon the New World Empire. He teleports around at random during the final battle and constantly taunts Sketch. When defeated, Mortus explodes.

The game is an action platformer which finds the player progressing through panels not unlike the pages in a comic book. To progress, the player has to fight their way past monsters and solve puzzles. Sketch is able to perform punch and kick combos, as well as jump attacks, and is also able to use items stored in his inventory like bombs and knives as weapons and iced tea for health. Sketch is only able to store three items in his inventory at any given time.

Sketch is capable of tearing shreds out of the backdrop and folding them into paper planes to throw at enemies as a weapon. Because this paper world is also part of everything within Comix Zone (as they are drawn on it), this action takes a significant slice off the player's health bar. Certain combos will send enemies hurtling, and if a fragile border between frames is in the way, the enemy crashes through it, tearing it to shreds. When confronted with an unbreakable frame barrier, the hero merely swings himself out of the frame, over the top of the border, and back down into the next scene. Sketch's pet rat Roadkill (whom he saved from certain doom in a garbage truck) is also capable of operating switches and discovering items hidden in panels, making him useful in helping Sketch's progress through Mortus' traps.

The game has multiple endings decided by actions taken during the final fight with Mortus. In the "good" ending, which is triggered by defeating Mortus and freeing Alissa in time, shows Sketch and Alissa leaving Comix Zone. Comix Zone becomes the highest selling comic of all time, Alissa joins the military and becomes the head of U.S Security, and Roadkill gets 100 pounds of mozzarella donated to him; the game, however, ends on a cliffhanger, claiming that "they all lived﻿ happily ever﻿ after until...". In the bad ending, Sketch escapes Comix Zone, but because the player doesn't save Alissa, she dies and Comix Zone is destroyed. The story ends with Sketch contemplating re-releasing the evil to re-live his adventure in hope of a better ending.

If Sketch ever dies before reaching the final panel, Mortus will turn from ink and paper to flesh and bone, and announces, "I'm going to rock this world!"

General notes on the game

Mortus does intend to give Sketch a 'sporting chance'. After the first chapter, if Sketch dies, Mortus will allow Sketch another chance to complete the page from the first panel, stating "Oh, come on -- that was just too easy!" After the second chapter, Sketch will get one more chance. If Sketch still has a chance at completing the game, his last words will be "Is this the end of the story?" If he has no such chances, his last words will simply be "Game over, man. The end."

As part of Sketch's travel into Comix Zone, he takes the hero's role in the story, giving him access to typical superhero fighting skills far beyond his regular abilities. If he attacks an immobile object, Sketch's health will diminish slightly, meaning that if he is low on health other tools such as explosives should be used to continue instead. One power-up - a collectible fist - temporarily transforms Sketch into Super Sketch, who shreds the page and destroys all enemies and obstacles in his path.

Sketch's rat, "Roadkill", can be deployed to electrocute enemies or pull switches in low clearing areas which Sketch might otherwise not be able to reach. It can also be used for finding hidden items in such areas just by releasing it.

If the player keeps tapping down in the control pad, Sketch will sometimes break wind, although this has no known use in the game. When left idle, he will also sometimes smell his shoes, and say, "Aw, man!"

Comix Zone was positively received and praised for its gameplay, graphics and music. It was however criticized for being too hard and its short length. There have also been some arguments made that the game was released too late into the Mega Drive lifespan. By the time the game came out, the Playstation and Sega Saturn were already released, meaning only few gamers heard about it and even fewer purchased it.[2] However based on the game's merits, the game has since received cult status.[3]

The game was ported to the Game Boy Advance only in Europe on September 11, 2002, which was developed by Virtucraft and published by Sega. Although this version's music was also composed by Howard Drossin, fans criticized this port because of its music being very different compared to the Mega Drive/Genesis version's. Also, while having a significantly smaller screen size that allowed much less onscreen, this was said to lessen the effect of seeing into the other frames around the player, making it more like a traditional platform game.

The game recently appeared in Sonic's Ultimate Genesis Collection (for Xbox 360 and PlayStation 3) and on 03/06/2010 it was made available through Steam. It is also included in the Sega Mega Drive pack.

In August 2011 the game was made available for download on PlayStation®Network as part of the SEGA Vintage Collection.

The European release of the Mega Drive and the Windows PC versions of the game included the Sega Tunes: Comix Zone soundtrack, which contains 'enhanced' music taken from the game's soundtrack and played by a full rock band with vocals named 'Roadkill' (the main character's pet rat, as well as a playable item; see above). The soundtrack was later released in North America under the Sega Tunes label.

The printing also reveals the artists behind the music: