The Octopus Project is an American indietronica band based in Austin, Texas, active since 1999. Its unique sound, blending pop and experimental elements, is a combination of digital and electronic sounds and noises (including drum machine, keyboard, synthesizers and other devices) and analog equipment (including guitars and live drums). Its music is mostly instrumental.

On April 30, 2006, the band played the Coachella Valley Music and Arts Festival. They were offered the opportunity after a fan, unbeknownst to the band, entered them in a contest held by the festival on MySpace in which voters were to "nominate their favorite band for an open slot at the festival".[1][2] In 2007, the Octopus Project supported underground hip-hop star Aesop Rock on his national tour, and in July 2009, The Octopus Project performed in Chicago at Lollapalooza.[3]

For their performance at the South by Southwest festival in their hometown in March 2010, the band put together a multi-media show which involved them performing material from what was to be their upcoming release, Hexadecagon. The band performed surrounded by 8 speakers, while 8 projectors projected videos corresponding to the music on tent ceilings above the stage and the audience.[4] Later that same year, The Octopus Project played at Moogfest 2010 in Asheville, North Carolina. They were scheduled to play just prior to Devo's headlining set. Three days prior to the concert, Devo's guitarist, Bob Mothersbaugh, severely injured his hand and was unable to play. Since the band was receiving a Moog Innovation Award at the festival, and because they didn't want to disappoint their fans, the remaining two members of Devo enlisted the help of The Octopus Project, and together the two bands performed the Devo songs "Girl U Want" and "Beautiful World."[5] 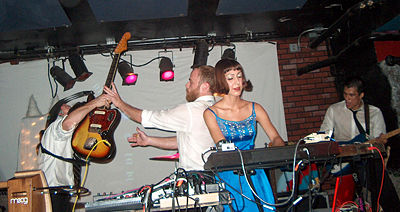 Ryan Figg and Josh Lambert exchange guitars in the midst of a song in San Francisco, August 2008.