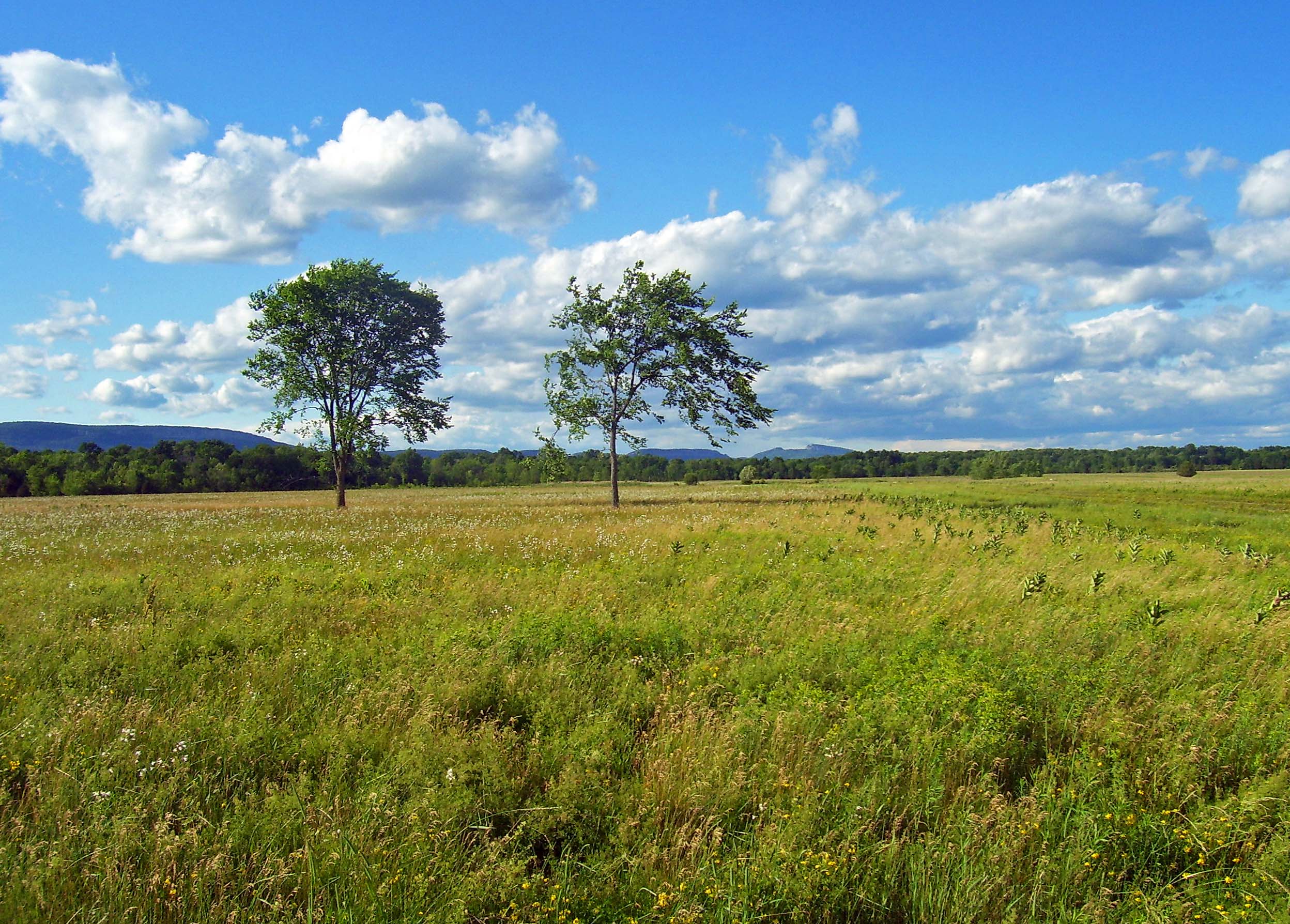 The 565-acre (2.1 km²) refuge first became U.S. federal property in the early 1940s, when the U.S. Army bought what was then land and filled it in with soil from the nearby s to build an airbase to meet its sudden need to train pilots as a result of .

In 1994 the Department of Defense decided it no longer needed the property. Five years later, after a protracted struggle with the Town of Shawangunk, which had wanted to develop the land as a park (and was eventually granted 55 acres (22 ha) for that purpose, today Galeville Park), it was conveyed to the (FWS), which had wanted to protect the land as one of the state's top ten areas for grassland-dependent migratory birds. It is today managed as a subunit of the , 35 miles (56 km) to the south.

Recently the FWS began and deshrubbing the 350 acres (1.4 km²) that makes up the refuge's core grasslands. This is essential for the grasslands would revert to the original wooded swamp if left untended.

The Shawangunk Grasslands National Wildlife Refuge is situated in the central portion of the town, closer to Wallkill than Walker Valley. It is a roughly rectangular parcel that sits slightly west of the , just below the crest of the divide between it and its , itself a relatively unspoiled stream and important habitat the FWS has been working to protect.

The central area of the property, the former airport, is bounded on all sides by woodland and shrubland (except for a small corridor around the main public access road) which makes up 165 acres (66 ha) of the total. The 400 acres (1.6 km²) that account for the core grassland also boast the former airport's 3,500-foot–long (1,067 m) s and equivalent s, taking up about 30 acres (12 ha) along the southern and western bounds of the grasslands. From this open space, it is possible to see much of the surrounding area's scenic highlights, particularly the to the west.

Like much of the , the Shawangunk Grasslands show the signs of glaciation during the last Ice Age, even though they were created much more recently through human action. The in the grasslands contains a high level of , which forms a barrier to most water filtering downward. Throughout the entire refuge, the is at least 3 feet (1 m) below the surface. Frequent freezing and melting during the winter results in pit-and- throughout much of the refuge.

The grasslands created by the airport's construction are one of only two such locations in the region that can support the 12 species of birds dependent on them. Some of them, according to the FWS, need at least 10-20 acres (4-8 ha), per nesting pair. A total of 151 bird species have been documented in the refuge, including 58 that use it for breeding.

The Shawangunk Grasslands are especially important to these grassland-dependent species:

The FWS has also been alerted to the possibility that s, a federal , may be exploiting opportunities provided by the refuge. A of 30,000 bats has been reported 18 miles (29 km) to the northeast, and there is evidence that some have roosted closer to the refuge. The agency has been monitoring the refuge to see if any Indiana bats begin to use dead trees as ing sites or begin to forage on the site.

While the refuge is protected primarily for the bird life, several rare or uncommon species have also been found in the grasslands, where is the dominant species

In 2002, the Fish and Wildlife Service finished its first final Comprehensive Conservation Plan for the Shawangunk Grasslands. Its primary goal in managing the area is to preserve and, where possible, extend the existing grassland.

FWS has also committed itself to exploring a number of ways to control the invasive plant species in the refuge, such as s, releasing and species that feed on the invaders and controlled burns in addition to the methods it already employs. Its goal is to reduce their presence to less than 10% of the refuge within 10 years.

Some of its employees have expressed concerns about whether any pollutants might be left over from previous military use of the site, particularly around a communications center demolished in 1973. While the agency does not presently believe there is any cause for concern, it will be monitoring the situation and plans an environmental assessment.

The FWS has credited other organizations, public and private, with helping it to fulfill its goals for the refuge. The former is represented by its state-level counterpart, the (NYSDEC), which has shared data with it, participated in the planning process and works with local communities to protect wildlife habitat. Among the latter, the local and state chapters advocated strongly for the area's protection, since the society had declared the airport site an Important Bird Area in 1998.

While the refuge is easily accessible to the public, activities within it are strictly limited to those that are wildlife-dependent: walking, , and in winter ing and . is not allowed, nor is any activity that would bring other animals (such as dogs or horses) or motorized vehicles into the area, since that would likely disturb the nesting birds.

Among the motorized vehicles banned from the refuge are . Model airplane enthusiasts, who took to the site and its abandoned runways before it was transferred to FWS, had hoped to continue to be allowed to do so under its management. Many of them wrote in with public comments favoring their hobby, saying wild birds and model airplanes could indeed coexist as they had for thirty years of model aviation at the former airport

FWS was also criticized by groups