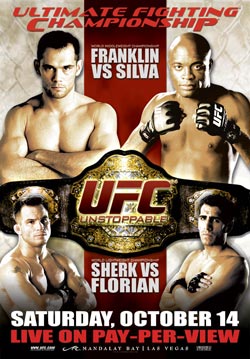 "UFC 64: Unstoppable" was a event held by the on Saturday, , . The event took place at the , on the in and was broadcast live on in the and .

A planned match between and was cancelled a day before the event when Nickels reaggravated a previous back injury sustained during training. A replacement could not be found because of the short notice. [ [http://www.sherdog.com/news/news.asp?n_id=5880] ]

*Lightweight bout: vs. :Pellegrino wins by submission (rear naked choke) at 2:04 of round one. This preliminary bout was not aired on the broadcast.

*Lightweight bout: vs. :Guida wins by submission (rear naked choke) at 4:42 of round two. The fight, although preliminary, was aired on the broadcast.

*Middleweight bout: vs. :Okami wins by TKO (strikes) at 1:40 of round three. This preliminary bout was not aired on the broadcast.

*Lightweight bout: vs. :Fisher wins by TKO (strikes) at 4:38 of round one. Lauzon came in as a late replacement, having only two weeks to prepare.

The disclosed fighter payroll for UFC 64 was $209,000. [http://www.ivansblog.com/2006/10/mixed-martial-arts-ufc-63-and-ufc-64.html] Individual payouts are listed below, note that numbers only include figures the UFC disclosed to the state athletic commission, and does not include PPV buyrate bonuses, sponsorship fees, or any other bonuses. [http://www.ivansblog.com/2006/10/mixed-martial-arts-ufc-63-and-ufc-64.html]