Clinch Mountain is a mountain ridge in the U.S. states of Tennessee and Virginia, lying in the ridge-and-valley section of the Appalachian Mountains. From its southern terminus at Signal Point peak, which lies at the intersection of Knox, Union and Grainger counties near Blaine, Tennessee, it runs in a generally east-northeasterly direction to Garden Mountain near Burke's Garden, Virginia. It separates the Clinch River basin, to the north, and the Holston River basin, to the south. 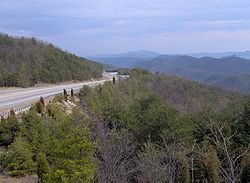 Clinch Mountain is a long ridge, about 150 miles (240 km) in length. It runs generally southwest-northeast, with numerous curves. Its north-south extent is 97 miles (156 km), and east-west 172 miles (277 km). Due to its size it is sometimes called a mountain range or complex. According to peakbagger.com, the Clinch Mountain Complex includes the sub-range of Knob Mountain, as well as four high point summits above 4,000 feet (Beartown Mountain, Flattop Mountain, Morris Knob, and Chimney Rock Peak).

For its entire length, Clinch Mountain only has two true gaps during which the ridge is completely sliced in half and continues as Clinch Mountain on either side, divided by a creek. One of those is Moccasin Gap at Weber City, Virginia (the Norfolk Southern Railway and U.S. Highways 23-58-421 utilize that crossing because there is no elevation in the division of the mountain). Moccasin Gap is currently planned to undergo major mountain removal to accommodate a planned highway project. The natural appearance of the gap will be altered significantly. The second true gap in Clinch Mountain is Little Moccasin Gap, 30 miles northeast of Moccasin Gap, where U.S. Highway 58 Alternate crosses between Hansonville and Abingdon, Virginia.

All other transportation crossings, as noted below, require an elevation climb to the top of the Clinch Mountain.

When U.S. Highway 25E was realigned into a four-lane highway northwest of Bean Station, Tennessee in the 1980s, it was necessary to cut a new gap into the top of Clinch Mountain, which lowered the original gap elevation by 200 feet. That realignment, along with the lowering of Interstate 26-U.S. Highway 23 at Sams Gap on the Tennessee-North Carolina border, are the only instances of a highway gap in Tennessee actually lowering an original gap where a state or federal highway was built through. (Sams Gap was lowered by 150 feet to accommodate the new Interstate 26 highway).

Clinch Mountain is named after the Clinch River, which was named after an unknown pioneer. The earliest known reference to the name is in the journal of Dr. Thomas Walker: "Clinch's River, from one Clinch a hunter" (Stewart, 1967:146).

The Wilderness Road to the Cumberland Gap crossed Clinch Mountain at Moccasin Gap, which Moccasin Creek flows through to join the Holston River to the south.

Signal Point peak at the southern terminus of Clinch Mountain was used to signal troops during the Civil War. The mountains along the Clinch Mountain Ridge also played an important role in the Battle of Bean's Station. Apart from battles, the mountains in Grainger County, Tennessee had prominence in the late 1800s when the mineral springs in the area drew notable visitors from around the globe. Tate Springs, as the town and resort were named, included an enormous hotel, golf course and mineral baths. The seasonal resort even had its own spur on the railroad, so visitors could easily make the trip from all over the country. Notable guests included the Fords, Studebakers, Mellons, Firestones and Rockefellers. Because of a devastating fire and the Great Depression, only a few buildings survive today.

The Carter Family immortalized the mountain in their 1928 song "My Clinch Mountain Home." A fiddle tune called "Clinch Mountain Backstep" (attributed to Ralph Stanley[1]) is in the Appalachian folk repertoire. Also, the first line of the classic folk song "Rye Whiskey" begins, "Way up on Clinch Mountain I wandered alone - I'm drunk as a devil and a long way from home."

The following crossings of Clinch Mountain can be made, from southwest to northeast: