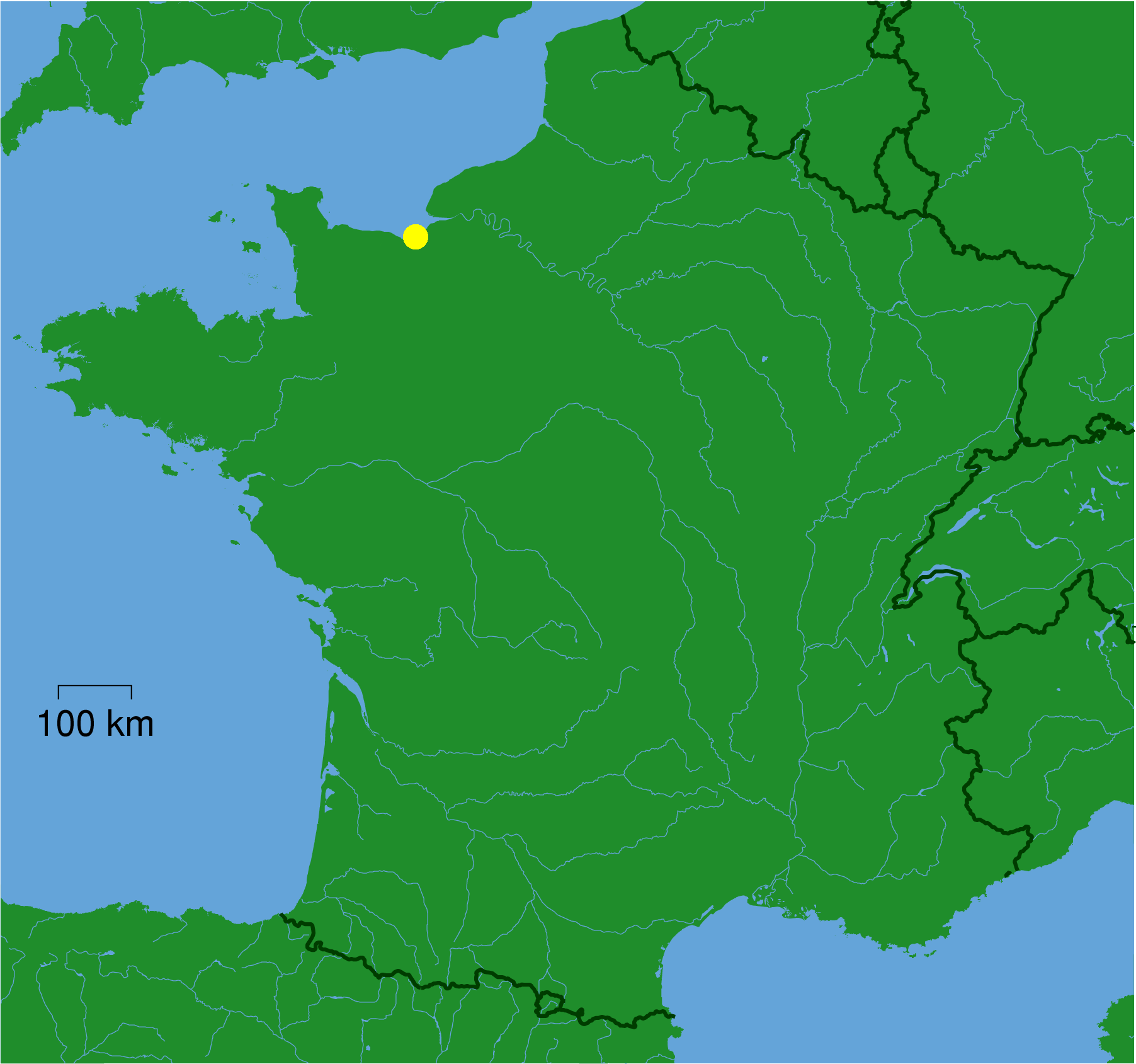 Houlgate is in the valley of the Drochon (once spelt Drauchon). The valley is mostly built up or used for animal grazing. The high parts of the town are covered by Houlgate's two woods: Le Bois de Boulogne and Le Bois de la Butte de Caumont.

To the east of the centre is Houlgate golf course and the fresh water trout fishing "Etangs du Drochon". The commune is separated from and by cliffs. The cliffs to the east, having a rather dark colour, have been nicknamed the "cliffs of the dark cows" "Falaises des Vaches Noires".

Houlgate was at first just a hamlet in the commune of Beuzeval. Beuzeval was part of the of Beaumont and of the of .

In the it was called Bovalis, became Eclesia-de-Bovalis then Boseval, a name that can be found written so in 1077.Some explain this name as meaning "vallée des Boeufs" (valley of oxen); others give it a Germanic origin.

Up until the last century, Beuzeval consisted of only a few small houses and farms, surrounded by small gardens with wild hedges dotted throughout the valley or on the hillsides.On the southern side of the was "Le hameau de la mer", consisting of a few houses, a tilery and the picturesque water mill, the "moulin Landry".

The sea was for a long time considered a danger and the local population lived further inland. Such can be seen by the old church of Beuzeval (now demolished), situated 3 kilometres inland.

It all started on the south side of the river Drochon, between 1845 and 1850, the fashion of sea bathing came to Beuzeval. A few tourists from and then started staying in Beuzeval for their holidays. With the numbers of tourists increasing a wooden boarding house was built.The Hotel Imbert was built in 1877 and in 1907 its tower was built. The sea side village is called Beuzeval-les-Bains and attracts much Protestant gentry.

The north side of the Drochon, larger and flatter, is still undeveloped. A company, the "Société de Construction Immobilière" (S.C.I.) was formed 12 years later in 1858 with plans to develop that area of Beuzeval. Its goals were to build with method and according to an urban plan. The company was formed by three men, a financier, a lawyer and a member of Parliament. The SCI bought most of the land, divided it into properties, drew the lines for streets and built a wall protecting the developing town from the sea. Within a few years large villas (then called chalets) were built and the quality of build can be seen now as most of these proprieties still exist now and the few that have been destroyed were gone during the Second World War or by recent estate operations.

In 1859 the Grand Hotel was built which comprised 120 bedrooms, each of them different, luxurious and with its own staff. In 1860 the of Notre-Dame de Houlgate was built. It replaced the old church which was situated too far inland and had become too small to accommodate the growing population. The first casino was then built: it was a wooden construction situated in front of the Grand Hotel.

The village took the name of Houlgate, which comes from the hill situated to the north east of the coastal village. Then a town hall was built, a school and a post office on the north side of the Drochon. At this time there were two distinct sea resorts. Beuzeval-les-Bains continued its development and in 1863 a hotel complex was built to house the Protestants coming to the sea side. A Protestant church was also built. Both villages grew independently.

In 1882 the railway arrived in Houlgate, the station was built between both villages so as to accommodate both of them. The dreaded walk below the cliffs separating and Houlgate soon became history when the railway line was built along the south side of the estuary of the river Dives. Indeed the railway line was built on a retaining wall protecting it from the winter storms and protected a new road built behind it. The line was then only connected to with train connection at Caen. Only a few years later, in the line to Villers-sur-Mer was finished, linking Houlgate to Paris (via Trouville-Deauville). It then took 4 hours by train to travel from the Paris Saint-Lazare in Paris and did not require a change of train.

By 1898 with the village of Houlgate becoming larger and more important than its earlier Beuzeval-Les-Bains counterpart, the town was renamed Beuzeval-Houlgate. In 1905, the name changed again, reverting to Houlgate.

After the 1870 and the of 1914-1918, many luxurious houses, shops and small industries were built following the streets the SCI had once built. The Grand Hotel was enlarged in 1895 and a rotunda was built at the south west corner of the building. The post office then moved out of one of the town hall annexes to its new accommodation. A public school for girls and another one for boys were built in the vicinity. The Promenade was finished in 1911. The town then welcomed many celebrities and royalty.

Although the town had then lost its bipolar configuration, the catholic population preferred the north side of the town whereas the Protestant population visited the south side as proved by the Protestant Queen Ranavalo of Madagascar's visit to Beuzeval-Les-Bains and the visit of Queen Isabelle II of Spain to Houlgate's Grand Hotel.

3 km from the sea side is the Manoir de Beuzeval, built during the RomanCentury|19. It is built on the site of an older, medieval castle.

Previously on the territory of the commune of it is in 1825 that after consideration of the many lands of the castle that it was decided to retrace the communal borders to place the castle in Beuzeval.

Between 1620 and 1640, the Château de Beuzeval was part of the fief of the Aché. As well as the castle the fief also owned a chapel where a chaplain was butheaded.

Jean of Aché (the then Lord of the Manor) accompanied William the Conqureror in 1066 for the Conquest of England. On the 6 of August 1066, a few days before his departure for England, William was forced to take refuge at the Château de Beuzeval due to a storm. The following morning, William thanked his host Pierre de Sinvillex and ordered him to accompany him to England. Pierre died at the .

The castle was unused for some time before the 19th century when the present structure was built. In 1815 after the defeat at the and the fall of the First Empire the region was occupied by Prussian troops. During the Germans, once again, established their local headquarters in the Manoir de Beuzeval.

Up the Chemin des Rouge Terres 2 km from Houlgate town centre is the Château de Dramard, a 17th century manor house built in limestone with a large central section with two small wings. The castle was built on the site of an older, medieval castle, or Priory of Mennetot.

In 1616 the château was bought by Pierre de Dramard, then councillor to the King, who became sire of Gonneville, Beuzeval and Mennetot.

In 1772, Pierre Louis Bonnet, Lord of Meautry, married demoiselle Gabrielle of Dramard. Pierre became mayor of in 1791 then in 1792 was elected députy of Calvados under the .

The château still stands and is now a hotel.

Houlgate being a commune, also known as municipality it has its own . He/She along with the municipal council has power over the municipal budget and hands out building permits.

The council also has the power to create municipal acts. As such Houlgate currently has a no dog fouling policy act that is not applicable at low tide when dog owners are allowed to walk their dogs on the beach.

The council also allocates funds and pays the "Direction Departementale de l'Equipment" (D.D.E.) for the maintenance of council streets. Indeed since the modernising of the town's streets the council has started to embelish the town by installing flower pots on most lamp posts as well as marble paving. This project started in late 1989 with the creation of a roundabout in front of the town hall. This new plaza features a fountain volcano.

During the mid-90s the council rebuilt the Rue du Général Leclerc and installed a one way system across the town centre.

The last road work project was the rebuilding of the Rue des Bains in late 2004.With the increase of the communal population during summer time, much of the commune's two water reservoirs are in great demand. In mid-July the council usually makes the decision to ban the unnecessary use of tap water.

The town of Houlgate is geared towards the tourism market. Many drinking establishments are open throughout the year.

Situated on Houlgate's seafront, the is the main establishment. The Casino features American-style fruit/slot machines (as opposed to the British bandit), a boule table, a colonial-style bar, the restaurant and a sea side bar. The casino's nightclub 'Le Manhattan' closed in the early 90s, the restaurant opened in the former club's room. The sea side bar sees many live performances throughout the summer season.The building also boasts a 150 seat cinema with Digital Dolby Surround sound and digital video (as well as analog).The 's main entrance is to the back on Rue Henri Dobert next to the mini golf.

Although the town has two small corner (Proxy Market and 8 à huit) it has retained its traditional charm and possesses traditional shops such as butcher's, baker's, fishmonger's, newsagent's, pâtissier and pork butcher's. The town also boasts an indoor market, open Thursdays and Saturdays off season and every day during the summer. Many local shop keepers have a stall in the market. Due to the proximity of the fishing fleet at , fishmongers and market stall keepers sell fresh sea food, usually harvested in the early morning (depending on the tide).

has a rich cultural and gastronomic heritage. Indeed due its history, the formerly independent of has inheritated particular food habits. The most common local products are Calvados, tarte normande and .

Because the town was built for the purpose of tourism, Houlgate is not particularly known for its industry, nevertheless on the 18th of March 1852 the Patrelle company was founded, specialising in aroma. Stews, sweets and ice creams are made around the world using Patrelle products.