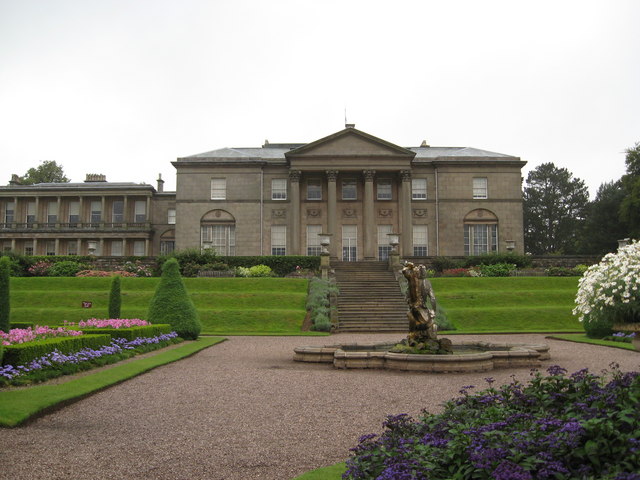 Tatton Hall is a in near , , (gbmapping|SJ745815). It is a Grade I which is owned by the National Trust and administered in conjunction with .

The original in Tatton Park was . [cite web |url= http://www.tattonpark.org.uk/Attractions/Old+Hall/tudoroldhall.htm |title= Tudor Old Hall|accessdate=2008-08-29 |publisher= Tatton Park] Around 1716 a new hall was built in a more elevated position on the site of the present mansion some convert|0.75|mi|km|0 to the west. This house was a rectangular block of seven bays with three s. [McKean, p. 1.] From 1758 the owner Samuel Egerton began to make improvements to the house, in particular a interior to his drawing room (now the dining room), designed by .

During the later part of the 19th century , hosted large house parties in the hall. Eminent guests included the Prince of Wales and the Princess in 1887, and at later dates the Shah of Persia and the of Siam. The last member of the Egerton family to live in the hall was Maurice Egerton.

The main body of the hall and the family wing to the west, both in two storeys, are built in with slate and lead roofs. The additions of 1884 (family entrance hall and smoking room) are faced in yellow . The south front of the hall has seven bays. At its centre is a large Corinthian with four monolithic columns. The north front is simpler in design, also with seven bays, and it has a ed porch with two columns. The east front has five bays with Corinthian s on a slightly projecting and an above. The family wing has seven bays. The south front has a Tuscan on the lower storey and an Ionic colonnade, and balustrade above.

Not all of the rooms are open to the public. The major rooms which are open are described below.

The Entrance Hall is in three bays. It is decorated in neoclassical style with a floor, red porphyry Ionic columns and a geometric ed, tunnel vaulted ceiling. The furniture includes two late 17th-century Italian chests of drawers and a chest dating from around 1730, and a 19th-century walnut table and chairs. On each side of a central niche are marble busts of the Duke of Wellington and on columns. The largest painting in the entrance hall is "The Cheshire Hunt, 1839" by Henry Calvert. [McKean, pp. 16–18.]

On the other side of the Entrance Hall is the Music Room whose walls are decorated with cherry-coloured silk . Much of the furniture is in the French Boulle revival style (with brass inlays in the style of ). An alcove was intended to be occupied by an organ but it contains a bookcase in boulle work. The circular table, couches and chairs are also in boulle style, made by Gillows. The fireplace is made from white marble and is decorated with images of musical instruments and motifs. Two vases on the mantelpiece are 19th-century Meissen. The was made by Kirckman's and is dated 1789. The paintings include pieces by , , , and , and two paintings by and . [McKean, pp. 19–22.] To the south of the music room is the Drawing Room which is decorated in a similar style. The ceiling is gilded and coffered and is decorated with rosettes. Together with its elaborate furniture it is the "most impressive and ostentatious room in the house". [McKean, p. 25.] The paintings include two views of by , "The Sacrifice of Noah" by Poussin, "The Martyrdom of St. Stephen" by Van Dyck, and paintings by and . A full-length portrait of Samuel Egerton is by . [McKean. pp. 23–26.]

Behind the portico on the south front of the house is the Library. The furniture in this room is practical rather than decorative, most of it again having been made by Gillows. The bookcases date from 1811–12. The pair of s, terrestrial and celestial, were made by the Cary family. On top of the bookcases are are Dutch Delft vases and jars from the 17th–18th centuries. The room contains over 8,000 books, many in their original covers and in . The earliest book is dated 1513. Some of the books are unbound and in their original paper covers, including first editions of two novels by . Other than a portrait of Charles II, all the paintings in the library are portraits of members of the Egerton family. [McKean, pp. 27–31.] To the west of the Library is the Dining Room. This is a survival from the original house and is decorated in style. The white marble fireplace dates from 1840 and was designed by . Most of the furniture in the room is made in by Gillows. The paintings in the room are all portraits of the Egerton family. [McKean, pp. 32–36.]

In the centre of the building are the main stairs. These rise from the Staircase Hall which is lit by a domed oval skylight. To east of this hall, through two pairs of marble columns, is the Cupola Hall. On its floor is an Axminster carpet with an unusual design showing celestial objects and the signs of the for the winter months. The halls contain English furniture in Adam style and items of oriental ceramics. [McKean, pp. 40–43]

On the walls of the upper landing are ten full length portraits known as "The Cheshire Gentlemen". They portray ten of the leading gentlemen of the county who met together at Ashley Hall to decide whether to support King George I or James Stuart in the Jacobite rebellion of 1715. They decided to support the king, which probably saved their lives and their estates. [McKean, p. 42.]

The bedrooms are named mainly after the type or colour of the original drapery. All the bedrooms, except the Lemon Room, have adjoining dressing rooms. The furniture in all the rooms was supplied by Gillows. [McKean, p. 45.] The Silk Bedroom is above the Entrance Hall and was one of the principal guest rooms. It contains furniture of inlaid with . The bed is a cut-down . The Silk Dressing Room contains a large tin bath on castors. [McKean, pp. 46–48] The other bedrooms are the Chintz Bedroom, which is furnished as a sitting room, the Lemon Bedroom, and the Amber Bedroom, which is furnished as a Victorian day nursery. Most of the paintings in the bedrooms depict family members. [McKean, pp. 49–54.] The Egerton Room was originally the Blue Bedroom but, with its dressing room, is now used for an exhibition about the Egerton family. In addition to family portraits, the paintings in these rooms include schemes for the design of the house by the architects, and paintings of architectural features by J. C. Buckler. There are also three paintings of excavations for the by . [McKean, pp. 55–57. Wilbraham Egerton, 1st Earl Egerton was the second chairman of the Manchester Ship Canal Company from 1887 to 1894.] The dressing room includes paintings by Vasari and Tosini. [McKean, pp. 58–59]

Entering the family wing from the hall, the first room on the left, beyond the garden entrance, is the Yellow Drawing Room. This has a more intimate atmosphere and contains a collection of furniture made by Gillows. This includes a bookcase dated 1795 and a pair of cabinets on each side of the fireplace. The paintings are family portraits. [McKean, pp. 37–38.] Opposite this room is the Family Entrance and opposite the garden entrance is the Oak Staircase which was moved here from . [McKean, pp. 60–61.] The Servants' Quarters occupy two floors, the ground floor and basement. These contain the usual rooms required to service a mansion and many of these are furnished with the equipment and utensils formerly in use in the house. One room, known as the Maurice Egerton Exhibition Room, houses a collection of items from around the world which were collected by Maurice Egerton on his travels. [McKean, pp. 63–75.]