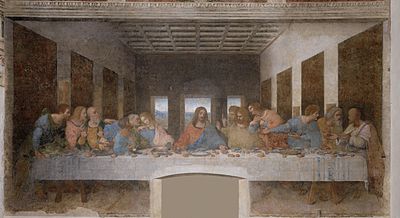 Examples of its use

The gospels are not always independent of each other. Matthew and Luke, for example, probably had Mark's gospel sitting right in front of them when they were writing. But we do have at least four early, independent sources. The criterion of multiple attestation focuses on the sayings or deeds of Jesus that are attested to in more than one independent literary source such as Apostle Paul, Josephus, Q and/or the Gospel of the Hebrews. The force of this criterion is increased if a given motif or theme is also found in different literary forms such as parables, dispute stories, miracle stories, prophecy, and/or aphorism. [1] [2]

Multiple attestation has a certain kind of objectivity. Given the independence of the sources, satisfaction of the criterion makes it harder to maintain that it was an invention of the Church. Still, this criterion, however useful, is typically one of a number of criteria, such as the criterion of discontinuity and the criterion of embarrassment, along with the historical method.

For example the "Kingdom of God" motif appears in "Mark, Q, the Gospel of the Hebrews, special Lucan tradition, and John, with echoes in Paul, despite the fact that 'Kingdom of God' is not Paul's preferred way of speaking." It also appears in an array of literary genres. The words attributed to Jesus on the bread and wine during the Last Supper (found in Mark, Paul, the Didache and arguably in John) and on divorce (found in Mark and Paul) are examples of sayings that are multiply attested. An example of an event that is multiply attested is Jesus's meeting with John the Baptist (found in Mark and John). [3] [4] [5] [6]

This criterion cannot be used for sources that are not independent. For example, a saying that occurs in all three Synoptic Gospels may only represent one source. Under the two-source hypothesis, both the authors of the Gospel of Matthew and the Gospel of Luke used the Gospel of Mark in their writings; therefore, triple-tradition material represents only a single source, Mark. (The Augustinian hypothesis posits that Mark and Luke used Matthew, so once again triple-tradition material would have originated in a single source). Another limitation is that some sayings or deeds attributed to Jesus could have originated in the first Christian communities early enough in the tradition to be attested to by a number of independent sources, thus not representing the historical Jesus. Finally, there are some sayings or deeds of Jesus that only appear in one form or source that scholars still consider historically probable. Multiple attestation is not always a requisite for historicity, nor is it enough to determine accuracy by itself.

The criterion is one of a number of factors that have been developed by scholars to assess whether a tradition is likely to be historical; the widely-recognized criteria were distinguished by Stanley E. Porter as dissimilarity, coherence, multiple attestation, least distinctiveness and Aramaic linguistic background. Porter suggests three new criteria in the search for the words of the historical Jesus (Porter 2000), which have not yet found broad acceptance: a criterion of Greek language, of Greek textual variance and of "discourse features" at variance with the text's usual style. Of the criterion of multiple attestations, Porter makes the point, which has been expressed before, that multiple attestations identify common motifs rather than absolute wording, and speak only to the independence of documents and not their reliability (Porter 2000:86).