Salix alba (White Willow) is a species of willow native to Europe and western and central Asia.[1][2] The name derives from the white tone to the undersides of the leaves.

It is a medium-size to large deciduous tree growing up to 10–30 m tall, with a trunk up to 1 m diameter and an irregular, often-leaning crown. The bark is grey-brown, deeply fissured in older trees. The shoots in the typical species are grey-brown to green-brown. The leaves are paler than most other willows, due to a covering of very fine silky white hairs, in particular on the underside; they are 5–10 cm long and 0.5–1.5 cm wide. The flowers are produced in catkins in early spring, and pollinated by insects. It is dioecious, with male and female catkins on separate trees; the male catkins are 4–5 cm long, the female catkins 3–4 cm long at pollination, lengthening as the fruit matures. When mature in mid summer, the female catkins comprise numerous small (4 mm) capsules each containing numerous minute seeds embedded in white down, which aids wind dispersal.[1][2][3] 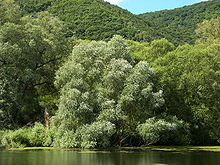 White Willows are fast-growing, but relatively short-lived, being susceptible to several diseases, including watermark disease caused by the bacterium Brenneria salicis (named because of the characteristic 'watermark' staining in the wood; syn. Erwinia salicis) and willow anthracnose, caused by the fungus Marssonina salicicola. These diseases can be a serious problem on trees grown for timber or ornament.

The wood is tough, strong, and light in weight, but has minimal resistance to decay. The stems (withies) from coppiced and pollarded plants are used for basket-making. Charcoal made from the wood was important for gunpowder manufacture. The bark was used in the past for tanning leather.[1][2]

A number of cultivars and hybrids have been selected for forestry and horticultural use:[1][2]

Hippocrates wrote in the 5th century BC about a bitter powder extracted from willow bark that could ease aches and pains and reduce fevers.[citation needed] This remedy is also mentioned in texts from ancient Egypt, Sumer, and Assyria.[citation needed] The Reverend Edmund Stone, a vicar from Chipping Norton in Oxfordshire, England, noted in 1763 that willow bark was effective in reducing a fever.[4] The bark is often macerated in ethanol to produce a tincture.

The active extract of the bark, called salicin, after the Latin name Salix, was isolated to its crystalline form in 1828 by Henri Leroux, a French pharmacist, and Raffaele Piria, an Italian chemist, who then succeeded in separating out the acid in its pure state. Salicylic acid, like aspirin, is a chemical derivative of salicin.