Pomoravlje (: Поморавље), is a general term which in its widest sense marks valleys of any of three Morava rivers in : (Zapadno or Western Pomoravlje), (Južno or Southern Pomoravlje) and (Veliko or Greater Pomoravlje). In the narrow sense, term is applied only to the Greater Pomoravlje. Term follows a general way of coining river valley names in Serbian using prefix "po-", meaning literally "(land) along Morava". 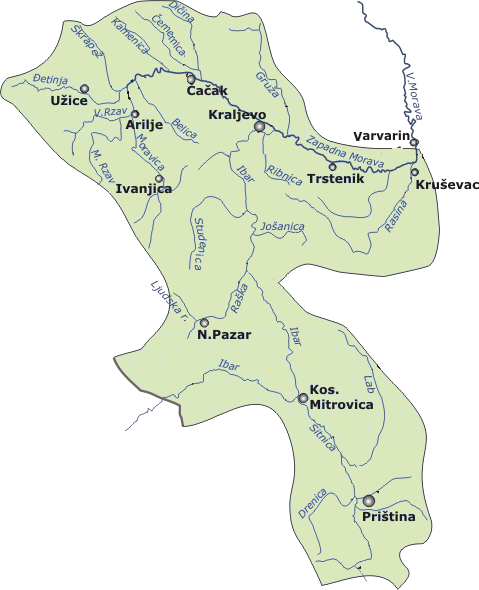 Western Pomoravlje is the valley of the West Morava. It is the southernmost Peripannonic region of Serbia. It is parallel, latitudinally elongated, in the west-to-east direction, opposed to the meridian, south-to-north direction of Southern and Great Pomoravlje. It occupies and area of 5,220 s and generally corresponds to the valley of West Morava and sections of its watershed around the rivers of , (headwaters of West Morava) and (a tributary, near the confluence with South Morava). It is generally bounded by the mountains of , , , , , , and , that is, by the large geographical regions of and

Western Pomoravlje is a valley, which means it consists of a sequence of valleys (depressions) and gorges. Sections include:

* Požega Depression ("Požeška kotlina") - starting point of Western Pomoravlje. Tašti field is a place where rivers of Skrapež, Đetinja and meet to create West Morava. Depression is located between the mountains of on the east, on the south, on the north-west and on the north-east. Depression is known for frequent fogs, due to the abundance in water sources (tributaries of Bjelica, Kravarička reka, Lužnica). Central settlement is the town of Požega and smaller settlements are and .

* ("Ovčarsko-kablarska klisura") - a narrow of the West Morava valley, between the mountains of (985 meters) on the south and (885 meters) on the north. The gorge is a meandering and 15 kilometers long. Epigynous in nature, it is a crucial for the genesis of the entire Western Pomoravlje. Gorge is a location of Ovčar Spa and 10 monasteries, which is why the gorge has been nicknamed Serbian . There are two hydro electrical power plants with artificial lakes: "Ovčar" and "Međuvršje".

* Čačak-Kraljevo Depression ("Čačansko-kraljevačka kotlina") - the largest tectonic-erosive depression of all in the valley. It covers an area of 270 square kilometers and is elongated for 40 kilometers. Despite being this long, it is located between only three mountains: Kotlenik on the north and Jelica and on the south. West Morava receives many tributaries in this area. Apart from , the longest tributary to West Morava, and Gruža, most of them are short and include Dičina, Lađevačka reka, Ribnica, etc. Main settlements are the towns of , the most populous settlement in the entire Western Pomoravlje, and . Other smaller settlements include , , , , , , etc, most of them suburbs of either Čačak or Kraljevo.

* Vrnjci Depression ("Vrnjačka kotlina") - widening at the confluence of the small Vrnjačka and Lipovačka rivers. Area, located between the mountains of Gledić on the north and Goč on the south, is rich in . The most popular Serbian , is located in the depression. Other settlements include , and .

* Trstenik Depression ("Trstenička kotlina") - depression centered around the town of , direct extension of Vrnjci depression. Agricultural area, other settlements include larger villages of and .

* Kruševac Depression ("Kruševačka kotlina") - final section of Western Pomoravlje, a large widening at the confluence with Southern Morava which directly extends into the Great Pomoravlje on the north. Itself, extends into the south in the valley of the Resava river and it is bounded by the mountain on the south. Largest settlement is the town of and its suburbs of , , , etc. Artificial lake of is created on the Rasina.

Western Pomoravlje comprises several historical and geographical regions of Serbia, which are its own geographical sub-regions. From west to east, they are:

Largest settlements of Southern Pomoravlje (in the narrower sense) in 2002 were:

Southern Pomoravlje is the major vegetable growing area in Serbia, especially the areas of Leskovac and Vranje, which are specialized in the production of tomatoes and bell peppers, but other early vegetebles as well. Vranje is also known for . The area is also producing grains (corn in Leskovac and Vranje, wheat in Vranje and Aleksinac- Niš region), fruits (plums in Vranje, grapes in Leskovac) and industrial plants (sugar beet in Aleksinac- Niš, tobacco in Aleksinac- Niš and Vranje). Leskovac is also known for the . Water from South Morava is also used for the irrigation.

The mountains surrounding the region are rich in minerals and ores. The mountain of Besna Kobila has findings of and . Other findings include , , , and . s are found near Vranje and Aleksinac. Aleksinac is also part of a large Aleksinac coal basin. Though South Morava has a significant potential for electricity production, it has not been dammed, though some parts of its watershed on the east (Vlasina, Vrla) have a series of hydro electrical plants (Vrla I, II, III and IV). Area is rich in mineral springs with many spas: Vranjska Banja, Bujanovčaka Banja, Ribarska Banja, Kulinska Banja, Klokot Banja, etc. There are several large industrical centers in the region, some of them among the largest in Serbia (Niš, Leskovac, Vranje). Secundary centers are Aleksinac and Vlasotince.

Along with Gret Pomoravlje, its natural continuation, Southern Pomoravlje is an important European transportation route and Niš is a major crossroads. It makes a section of the Belgrade-- route, that is, of the (which connects and ), with a branch splitting at Niš for , , which is actually a crossoads of the routes E75 and which connects and . Except for the Leskovac-Macedonian border section, route has been turned into a highway. Southern Pomoravlje is also a railway crossroads: railway Belgrade-Niš-Skopje, trans-Balkan railway -, etc. 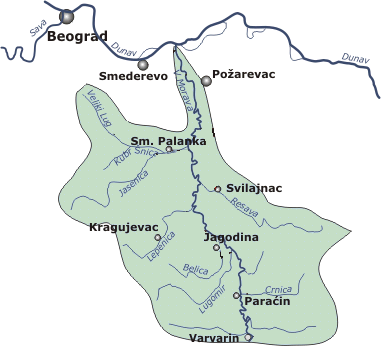 Greater Pomoravlje is the valley of the Great Morava. It is often referred to only as Pomoravlje (Serbian is located in the southern area of Greater Pomoravlje). It the beginning, it is bounded by the mountains of on the west and on the east. In the later section, Pomoravlje gets much wider, with only smaller hills bounding it and opens widely to the and region, across the river. It covers an area of 4,360 square milometers, which is over 70 % of the entire Great Morava watershed.

Greater Pomoravlje is a valley region of the middle, Peripannonic Serbia. In the Neogene, it was a deep bay ("Morava Bay") of the inner , which flowed off through the gorge 600,000 years ago. As the sea withdrew, the Great Morava cut in its flow through the drained bay, almost for 500 meters. The region is 120 kilometers long and up to 40 kilometers wide. Altitudes vary from 75 meters on the north to 130 meters on the south. It has a tempered continental climate with not much rainfall but frequend floods. Composite valley of the Great Morava has three main sections.

* Upper Great Morava or Ćuprija Depression ("Gornjovelikomoravska or Ćuprijska kotlina") - southern half of Greater Pomoravlje, located between the mountains of Juhor (east) and Kučaj (west). After the Neogene phase, in which the depression was the southernmost extension of the Pannonian Sea, the Great Morava cut through from the relative altitutude of 350 meters ("Five Morava Plateaus"). It has three larger (, and ) and two towns (, ), so as several large villages. In this section, the Great Morava receives the tributaries of Kalenićka Reka, , Belica (from the left), and (from the right).

* Bagrdan Gorge ("Bagrdanska klisura") - wide gorge, epigynously cut in the nearby hills. It is 17 kilometers long and it is the final gorge of the entire Morava course. It was named after the village of . River Osanica flows into the Great Morava from the left in the gorge. In the 1980s, the gorge was planned for the hydro electrical dam construction and creation of a reservoire.

* Lower Great Morava or Požarevac Depression ("Donjovelikomoravska or Požarevačka kotlina") - northern half, ending section of the entire Morava river system, where it finally empties into the Danube. Very wide and open to the north (), with two larger cities, and .

Regions, which partially or completely make Greater Pomoravlje, include , , and . As Great and West Morava are considered eastern and southern borders, respectively, of the super-region of , they largely overlap with it in these areas.

Southern Pomoravlje had a population of 545,517 inhabitants by the 2002 census of population, with an average population density of 125 inhabitants per square kilometer. Extremes include Smederevo, with 230 per sq.km, and , with 41 per sq.km. Despite being developed as an agricultural and industrial region, it has been depopulating for the last few decades. Population of Pomoravlje by the official censuses of population:

In the 1980s plans were made to join towns of Jagodina, Paraćin and Ćuprija into the first planned in , including inter-city way lines, etc, but the idea was dropped later. Largest settlements of Greater Pomoravlje in 2002 were:

With the most fertile arable land, almost endless gardens, orchards and vineyards and its intensive agriculture, Greater Pomoravlje is the granary of Central Serbia. Great Morava agricultural region covers much larger area than the Greater Pomoravlje or even the watershed of the Great Morava: regions of Mlava and on the east () and almost half of , on the west. Main products in the valley are corn, wheat, and sunflower. Hilly areas surrounding the valley are producing fruits, grapes (Smederevo), plants and livestock. Braničevo region has the largest production of in Serbia. Horse is located near Požarevac. In the past centuries Great Pomoravlje was famous for its vast forest, but today it is almost entirely turned into an arable land.

Unlike Western and Southern Pomoravlje, Greater Pomoravlje has almost no ores or minerals, except for the near Paraćin. But the area has vast finding of coal, near Kostolac (Kostolac-Podunavlje Basin; ), in the valley of (Despotovac Basin; brown coal at Makvište and Resavica, at Despotovac) and near Ćuprija (Senje Basin; brown coal). Also, Great Pomoravlje has only few mineral springs (Lućička Banja, Stragarska Banja, etc). Major industrial centers are Jagodina, Smederevo, Smederevska Palanka and Ćuprija, followed by Paraćin, Požarevac and Velika Plana. "Morava" (125 MW is located near Svilajnac. One of three Serbian cement plants is located in (formerly "Novi Popovac", in 2002 bought by one of the world's leading suppliers of cement, the Swiss company "").

Valley of the Great Morava was always an important traffic route. In Roman times, it was the location of , while in the medieval period road ran through. Today, it makes a section of the European route E75 (Belgrade-Niš highway) which continues into the Southern Pomoravlje. It also a route for the Belgrade-Niš railway. In past times, Great Morava used to be navigable, but due to the huge amounts of materials which are brought by the South Morava, as a result of extreme erosion in its watershed, the river bed of the Great Morava is literally being covered up so the river is not navigable today. Only some 3 kilometers near its mouth into the Danube can be used for navigation.