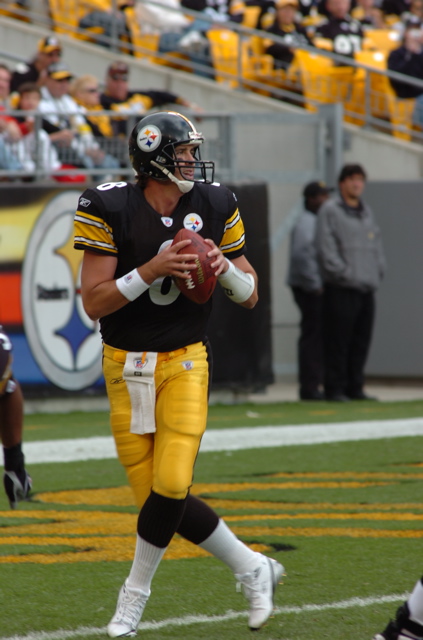 Thomas "Tommy" Alfred Maddox (born , in ) is a former football in the who most recently played for the .

Maddox played as quarterback at , where he was well-regarded, but was, in opinions of some, ill-advised in attempting to turn professional after his season. Drafted by the in the first round of the , he spent several seasons in the NFL relegated to back-up duty on various teams. He was drafted by then , a sign of the coach's troubled relationship with quarterback . Maddox also played for the Los Angeles Rams and the before being released by the during the 1997 preseason.

After being released from the NFL, Maddox was out of football for a period of time, selling insurance for his father in . After being featured on about where his career had gone since being drafted, he had the itch to play again, and joined the New Jersey Red Dogs of the for one season.

After his brief stint in the , Tommy Maddox was invited to try out for the of the . Maddox became the starting quarterback for LA in week 1, despite the team using its first pick in the on quarterback . Maddox made an impact in his time in the . He was the only quarterback of the league to start all 10 regular season games, led the league in passing yards, touchdowns, rushed for 2 touchdowns, and led the Xtreme to the , also known as the "Big Game At The End." The Xtreme defeated the with a score of 38-6. Maddox was named the XFL MVP in 2001. However Tommy Maddox's XFL glory would not last, as the league closed after its only season in 2001.

During his stint in the XFL, Maddox's playing style was noticeably different as well. Considered a more "mobile" quarterback who could scramble during his days at UCLA and in his early NFL days, Maddox's time away from football (combined with his one year in the AFL) made him more of a traditional "pocket passer", as the AFL requires quick passes with a smaller field.

Maddox signed with the as a backup in 2001. His signing continued a coincidental tradition of having natives at quarterback for the Steelers. Since the 1970 merger, the Steelers have had four starting quarterbacks from the state, with and Maddox both being from Shreveport, being from Monroe, and being from the New Orleans suburb of Marrero.

Early in the 2002 season, Maddox replaced at quarterback in a comeback win over the rival . Maddox became a dominant NFL quarterback in 2002 as he led the Steelers into the playoffs with a 10-5-1 record. One of Maddox's most memorable games came in the first round of the playoffs when he overcame a 17 point 3rd quarter deficit against the . Maddox delivered a clutch 36-33 win over the rival at home in the wild card round before a 34-31 loss at the in the second round. He won the ESPN for Best Comeback Athlete and the for his performance during the 2002 season, in which he threw 20 touchdowns and 16 interceptions.

In 2003, Maddox had an average year statistically as the Steelers finished at a disappointing 6-10. After the 2003 season, the Steelers drafted a new quarterback, , in the first round, to give the position some youth. (Maddox was over a year older than his predecessor, Kordell Stewart.) Roethlisberger was given the starting job after Maddox was injured during a week 2 game against the Ravens, and responded by guiding the Steelers to 14 straight regular season wins and a trip to the AFC Championship game.

Maddox reassumed his starting QB role when Roethlisberger suffered a knee injury early in the 2005 season, but losses in a poor performance against the and the sent him back to the bench, giving the second-string spot. Following the Steelers' win in , Maddox was released from the team for salary cap reasons.

Tommy Maddox is one of three players (along with and Ron Carpenter) to hold both a and XFL championship ring. However, Maddox was the only Steelers player not to attend the ceremony at the honoring their Super Bowl championship. In addition, Maddox was the only player to have been teammates with both and , as the latter idolized the former growing up and wears number 7 in his honor.

Maddox is an avid er, and he is the founder of the for disadvantaged children.

Maddox tried out for the , and the in September 2006, but did not sign a contract. [ [http://mondesishouse.blogspot.com/2006/09/tommy-maddox-raider.html Mondesishouse.com: Tommy Maddox a Raider? ] ]

Maddox currently wishes to become a football coach, and is currently spectating TCU spring football practices to exchange ideas and observe. However, he is not allowed to be hands on or coach himself due to NCAA restrictions on the number of coaches a team can have.Fact|date=May 2008