/ˈmɒskoʊ/ moss-koh) is a city in northern Idaho, situated along the Washington/Idaho border. It is the most populous city and county seat of Latah County[3] and the home of the University of Idaho, the land grant institution and primary research university for the state. Eight miles (12 km) west is Pullman, Washington, home of Washington's land-grant university, Washington State University.

While the university is the dominant employer in Moscow, the city also serves as an agricultural and commercial hub for the Palouse region. The 2010 census reported a population of 23,800.

Moscow is the principal city in the Moscow, Idaho Micropolitan Statistical Area, which includes Latah County. Moscow is the birthplace of writer Carol Ryrie Brink and singer Josh Ritter.

Along with the rest of northern Idaho, Moscow resides in the Pacific Time Zone. The elevation of its city center is 2,579 feet (786 m) above sea level. Major highways serving the city are US-95 (north-south) and Highway 8 (east-west), both of which are routed through Moscow city center. Limited commercial air service is four miles west (6.4 km) at the Pullman-Moscow Regional Airport.

The city of Moscow lies on the eastern edge of the Palouse region of North Central Idaho in the Columbia River Plateau. East of the city is a valley within the mountains of the Palouse Range to the northeast, whose highest point is Moscow Mountain at 4983 feet (1519 m) above sea level. The less prominent Paradise Ridge at 3702 feet (1128 m) and Tomer Butte at 3474 feet (1059 m) are southeast of the town.[4] Paradise Creek, with headwaters on Moscow Mountain north of the city, flows through the city of Moscow. It then crosses the state border and joins the south fork of the Palouse River near Pullman, which eventually drains into the Snake River and Columbia River on its way to the Pacific Ocean.[5]

The geology in and around Moscow represents varied formations: very old intrusive granite structures of the Cretaceous–Tertiary Idaho Batholith, fertile fields atop rolling hills of deep Pleistocene loess of the Palouse Formation deposited after the last ice age by westerly winds, and flood-worn channels of the Columbia River Basalt Group.[6]

There are a variety of flora and fauna within the vicinity of Moscow. An amphibian, the Rough-skinned Newt, has a disjunctive population at Moscow; this species is found typically along the Pacific coast of the USA.[7] 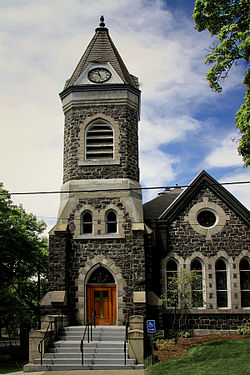 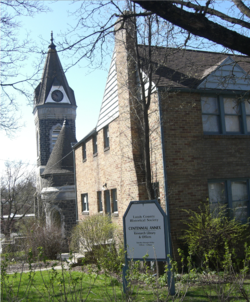 Latah County Historical Society with a view of First United Methodist Church in the background.

Miners and farmers began arriving in the northern Idaho area after the Civil War. The first permanent settlers came to the Moscow area in 1871. The abundance of camas bulbs, a favorite fodder of pigs brought by the farmers, led naming the vicinity Hog Heaven. When the first US post office opened in 1872, the town was called Paradise Valley initially, but the name was changed to Moscow in 1875. The name Paradise persists with the main waterway through town called Paradise Creek.

The precise origin of the name Moscow has been disputed, but there is no proof that it was named by a Russian or for the Russian city (the Russian municipality is pronounced 'MoskVA' and the Idaho municipality is pronounced 'MosCO'). It was reported by early settlers that five men in the area met to choose a proper name for the town, but could not come to agreement on a name. The postmaster Samuel Neff then completed the official papers for the town and selected the name Moscow. Interestingly, Neff was born in Moscow, Pennsylvania and later moved to Moscow, Iowa.[8]

The business district was established by 1875 and the town was a center of commerce for the region. By 1890, the Oregon Railroad and Navigation Company's rail line (later the Union Pacific) and the Northern Pacific railroad line helped to boost the town's population to 2000. 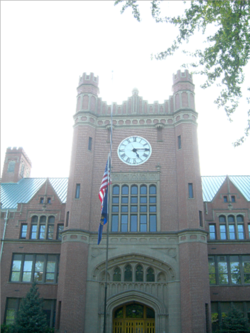 The capital of the Idaho Territory was relocated from Lewiston to Boise in December 1864. In the late 1880s, statehood for the Washington Territory was nearing. Because its commercial and transportation interests looked west, rather than south, the citizens of the Idaho Panhandle passionately lobbied for their region to join Washington, or to form an entirely separate state, rather than remain connected with the less accessible southern Idaho. To appease the residents of the north, the territorial legislature of Idaho in Boise placed the new land grant university in Moscow, which at the time was the largest city other than Boise in the state. The University of Idaho was chartered in January 1889, and first opened its doors to students in October 1892.[9]

In March 1890 Moscow's neighboring city, Pullman, was selected as the home of Washington's land grant institution. The college which would eventually become Washington State University, opened its doors in January 1892. Washington entered the union as the 42nd state in November 1889. Idaho entered next, eight months later, in July 1890.

Members of the Pleiades Club and Ladies’ Historical Club formed a cooperative named the Women's Reading Room Society and established a small library in the Browne building at the corner of Main and Second Streets in 1902.

Moscow Public Library
1906 Building with the 1983 annex on the left.

In 1904 the committee planned to raise funds for a new library building. Andrew Carnegie promised funding of $10,000 if the community agreed to maintain a free public library at the rate of at least $1000 annually. Moscow voters approved a permanent tax in 1905 and with successful fundraising by subscription of local residents and businesses, coupled with the Carnegie library money, the library construction was begun in 1905. In March 1906, the Mission Style building was ready for occupancy. A fire at the University Of Idaho Administration Building totally destroyed that structure, so the new library was used for university classes during the day and residents used the library in the evening. Beginning in 1907 the building was returned to full use as a library. The original library building (which is on the National Register of Historic Places) was expanded in 1931 and 1983. The building houses a children's room named for the author Carol Ryrie Brink. In 2006, the Friends of the Library celebrated a Century of Service for the organization. The current organizational structure of library service encompasses all public libraries in Latah County as the Latah County Library District. The library enjoys broad support from the citizens of Moscow and the County and is also supported by the Idaho Commission for Libraries (formerly the Idaho State Library.) To commemorate the first century of the library, an essay competition was held. One young writer wrote:

We are fortunate enough to be able to walk a few blocks down to the public library and check out whatever we want. Libraries are valuable and available to everyone, regardless of wealth. Anyone can and everyone should get a library card. I am very grateful that we have a public library in Latah County.
— Elizabeth Nielsen (2006)

The library serves as resource for all the residents of Moscow, or as one essayist (Ellis Clark) in the 2006 contest states, "When time, money, or circumstances bind you to one locale, the Library is your passport for travel."[10] 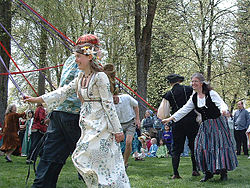 There are seventeen neighborhood parks located throughout the town offering a wide variety of venues for outdoor activities. These parks fall under the jurisdiction of the Moscow Parks and Recreation Department. The Paradise Path Task Force is a citizen committee seeking to develop a system of linearly connected parks throughout the area. Carol Ryrie Brink Nature Park was a community collaboration between the Palouse Clearwater Environmental Institute and local volunteers to remeander Paradise Creek and add riparian plantings. The Moscow community, including schools and the city, led by local youth, raised money over several years to fund, design, and build a skate park which was completed in 2000.

The Latah Trail, completed in October 2008, extends from the eastern edge of Moscow bike path system to Troy, parallel to the Troy Highway for most of its 12 miles (19 km). On the west side of Moscow, the Bill Chipman Trail connects the two university communities of the Palouse. Starting at the UI's Perimeter Road, it gradually descends with Paradise Creek for 8 miles (13 km) to Pullman through Whitman County, alongside the Moscow-Pullman Highway. Completed in April 1998, the trail honors a Pullman businessman (and UI alumnus) who died following a winter highway accident in Spokane County. The Paradise Path bridges the gap in Moscow between the endpoints of the Chipman and Latah trails, passing through the north and east edges of the UI campus. The trail systems together constitute a continuous 22-mile (35 km) paved linear park from Pullman to Troy, extending in Troy beyond the eastern boundary of the Palouse ecosystem. From Pullman to the western boundary of Moscow (the state line), it follows the right of way of a dismantled Union Pacific railroad line, and east of US-95 it follows the right of way of a dismantled BNSF railroad line that junctioned at Arrow on the Clearwater River by way of Troy, Kendrick, and Juliaetta.

This list does not include private daycare facilities unless they are listed with the State of Idaho as schools.[11] 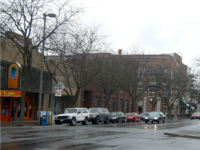 Hispanic or Latino of any race were 2.47% of the population.

There were 7,724 households out of which 24.2% had children under the age of 18 living with them, 41.0% were married couples living together, 6.4% had a female householder with no husband present, and 49.9% were non-families. 29.9% of all households were made up of individuals and 5.5% had someone living alone who was 65 years of age or older. The average household size was 2.25 and the average family size was 2.87.

In the city the age distribution of the population shows:

McConnell Mansion
The house is on the National Register of Historic Places. It is open for tours by the Latah County Historical Society.

Moscow has a Council-Mayor form of government consisting of six Council members (at large) and a Mayor. These positions are elected separately and serve four year terms. Council member elections are held in odd-numbered years in November, with terms staggered so that three of the six seats are open at each election. Mayoral elections are held the November after a US Presidential election (e.g., most recently in 2009).

The Council elects a President and Vice-President from among its members at its first meeting in January each year. These two officers may stand in for the mayor as necessary. Council is the legislative and judicial arm of Moscow's City government; enacting ordinances and resolutions. This body confirms the Mayor's appointments of City officials and citizen advisory commission members. Council approves the City's annual budget and serves as the convening body for public hearings and appeals of other City Boards and Commissions. Meetings are generally scheduled for the first and third Monday of each month, beginning at 7:00 p.m.[15]

Moscow has one sister city, as designated by Sister Cities International: