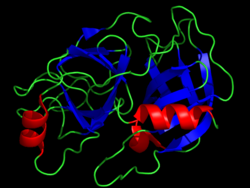 Serine proteases (or serine endopeptidases) are enzymes that cleave peptide bonds in proteins, in which serine serves as the nucleophilic amino acid at the active site.[1] They are found ubiquitously in both eukaryotes and prokaryotes. Serine proteases fall into two broad categories based on their structure: chymotrypsin-like (trypsin-like) or subtilisin-like.[2] In humans, they are responsible for co-ordinating various physiological functions, including digestion, immune response, blood coagulation and reproduction.[1]

Chymotrypsin-like serine proteases are characterised by a distinctive structure, consisting of two beta-barrel domains that converge at the catalytic active site. These enzymes can be further categorised based on their substrate specificity as either trypsin-like, chymotrypsin-like or elastase-like.[3]

Trypsin-like proteases cleave peptide bonds following a positively charged amino acid (lysine or arginine).[4] This specificity is driven by the residue which lies at the base of the enzyme's S1 pocket (generally a negatively charged aspartic acid or glutamic acid).

The S1 pocket of chymotrypsin-like enzymes is more hydrophobic than in trypsin-like proteases. This results in a specificity for medium to large sized hydrophobic residues, such as tyrosine, phenylalanine and leucine.

Elastase-like proteases have a much smaller S1 cleft than either trypsin- or chymotrypsin-like proteases. Consequently, residues such as alanine, glycine and valine tend to be preferred.

Subtilisin is a serine protease in prokaryotes. Subtilisin is evolutionary unrelated to the chymotrypsin-clan, but shares the same catalytic mechanism utilising a catalytic triad, to create a nucleophilic serine. This is the classic example used to illustrate convergent evolution, since the same mechanism evolved twice independently during evolution.

The main player in the catalytic mechanism in the chymotrypsin and subtillisin clan enzymes mentioned above is the catalytic triad. The triad is located in the active site of the enzyme, where catalysis occurs, and is preserved in all serine protease enzymes. The triad is a coordinated structure consisting of three essential amino acids: histidine (His 57), serine (Ser 195) (hence the name "serine protease") and aspartic acid (Asp 102). Located very near one another near the heart of the enzyme, these three key amino acids each play an essential role in the cleaving ability of the proteases.

Each amino acid in the triad performs a specific task in this process: 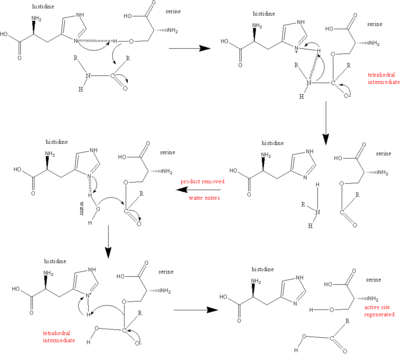 The whole reaction can be summarized as follows:

It was discovered that additional amino acids of the protease, Gly 193 and Ser 195, are involved in creating what is called an oxyanion hole. Both Gly 193 and Ser 195 can donate backbone hydrogens for hydrogen bonding. When the tetrahedral intermediate of step 1 and step 3 are generated, the negative oxygen ion, having accepted the electrons from the carbonyl double bond fits perfectly into the oxyanion hole. In effect, serine proteases preferentially bind the transition state and the overall structure is favored, lowering the activation energy of the reaction. This "preferential binding" is responsible for much of the catalytic efficiency of the enzyme.

Host organisms must ensure that the activity of serine proteases is adequately regulated. This is achieved by a requirement for initial protease activation, and the secretion of inhibitors.

Zymogens are the usually inactive precursors of an enzyme. If the digestive enzymes were active when synthesized, they would immediately start chewing up the synthesizing organs and tissues. Acute pancreatitis is such a condition, in which there is premature activation of the digestive enzymes in the pancreas, resulting in self-digestion (autolysis). It also complicates postmortem investigations, as the pancreas often digests itself before it can be assessed visually.

Zymogens are large, inactive structures, which have the ability to break apart or change into the smaller activated enzymes. The difference between zymogens and the activated enzymes lies in the fact that the active site for catalysis of the zymogens is distorted. As a result, the substrate polypeptide cannot bind effectively, and proteolysis does not occur. Only after activation, during which the conformation and structure of the zymogen change and the active site is opened, can proteolysis occur.

As can be seen, trypsinogen activation to trypsin is essential, because it activates its own reaction, as well as the reaction of both chymotrypsin and elastase. Therefore, it is essential that this activation does not occur prematurely. There are several protective measures taken by the organism to prevent self-digestion:

There are certain inhibitors that resemble the tetrahedral intermediate, and thus fill up the active site, preventing the enzyme from working properly. Trypsin, a powerful digestive enzyme, is generated in the pancreas. Inhibitors prevent self-digestion of the pancreas itself.

Serine proteases are paired with serine protease inhibitors, which turn off their activity when they are no longer needed.[5]

Serine proteases are inhibited by a diverse group of inhibitors, including synthetic chemical inhibitors for research or therapeutic purposes, and also natural proteinaceous inhibitors. One family of natural inhibitors called "serpins" (abbreviated from serine protease inhibitors) can form a covalent bond with the serine protease, inhibiting its function. The best-studied serpins are antithrombin and alpha 1-antitrypsin, studied for their role in coagulation/thrombosis and emphysema/A1AT, respectively. Artificial irreversible small molecule inhibitors include AEBSF and PMSF.

Mutations may lead to decreased or increased activity of enzymes. This may have different consequences, depending on the normal function of the serine protease. For example, mutations in protein C, when leading to insufficient protein levels or activity, predispose to thrombosis.

Determination of serine protease levels may be useful in the context of particular diseases.