Ecology of California
This article describes natural biological communities. See Environment of California for a description of human habitat adjustments.

Botanists generally consider the California chaparral and woodlands, Sierra Nevada forests, Central Valley grasslands, Northern California coastal forests, and Klamath-Siskiyou as a single California Floristic Province, which does not include the deserts of eastern California, which belong to other floristic provinces. Many Bioregionalists, including poet Gary Snyder, identify the central and northern Coast Ranges, Klamath-Siskiyou, the Central Valley, and Sierra Nevada as Alta California or the Shasta Bioregion.

California montane chaparral and woodlands in the Santa Ynez Mountains

Klamath-Siskiyou forests in the Trinity Alps

California's Central Valley was once a large temperate grassland, the California Central Valley grasslands ecoregion, which was formerly home to great herds of grazing pronghorn and elk; some writers have referred to it as "America's Serengeti". The Central Valley has been mostly converted to farms and rangeland; its once great seasonal wetlands have been drained and its perennial bunch grasses replaced by exotic annual grasses[2] or farm fields, but patches of the native bunchgrasses still exist, as do some of the small seasonal wetlands known as vernal pools. 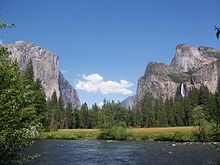 The cooler and wetter mountains of northern California are covered by temperate coniferous forests. Along the eastern edge of California, the mountainous Sierra Nevada forests are home to the world's most massive tree, the Giant Sequoia (Sequoiadendron giganteum) and the contiguous United States' highest point, Mount Whitney. Wet-season rain and dry-season fog support the Northern California coastal forests, which grow the world's tallest tree, the Coast redwood (Sequoia sempervirens). Inland, the Klamath-Siskiyou forests support some of the world's most diverse coniferous forests. In sparsely-populated northeastern are the Eastern Cascades forests.