Dijon Cathedral (Cathédrale Saint-Bénigne de Dijon), dedicated to Saint Benignus of Dijon, is a Roman Catholic cathedral, and national monument of France, located in the town of Dijon, Burgundy.

The first church here was a basilica built over the falsely reported sarcophagus of Saint Benignus, which was placed in a crypt constructed for it by Saint Gregory of Langres in 511; the basilica over the crypt was completed in 535. This building became the centre of a monastic community. In 871 Isaac, Bishop of Langres, re-founded it as a Benedictine abbey, and restored the basilica at the same time.

In 989 Bruno, Bishop of Langres, requested Mayeul, Abbot of Cluny, to send monks to re-settle the abbey, grown decadent, as a Cluniac house. In 990 William of Volpiano was appointed the new abbot. By 1002 the ruin of the previous building had been completely razed and construction began on a new Romanesque structure designed by William, consisting of a subterranean church round the sarcophagus of Benignus, a ground floor church for worship, and a rotunda, 17 metres in diameter, on three levels in the place of the apse, linking the two. Dedicated in 1017, this suite of buildings was decorated in the ornate Cluniac style, of which only a few traces survive.

In 1137 a fire destroyed most of the town of Dijon and damaged the monastery and its church. The repaired building was consecrated by Pope Eugene III in 1147.

In 1272 the crossing tower collapsed, destroying the whole of the upper church and severely damaging the subterranean one, and smashing some of the supporting columns of the rotunda. Then the abbot, Hugh of Arc, of a powerful Burgundian family, was able thanks to his contacts to mobilise enough support to begin the construction of a new Gothic abbey church in 1281. Progress was at first rapid, and at Hugh's death in 1300 the building was close to completion. Progress slowed, however, and the work was not finished until 1325. The new church, unlike its Cluniac predecessor, is noted for its plainness and severity.

The abbey was secularised during the French Revolution, but the church was made, firstly, a parish church, and then in 1792 the cathedral of the Diocese of Dijon. The rotunda was however destroyed at that time; all that remains is the lowest storey, which was excavated in the 19th century and has since been reworked as a crypt. 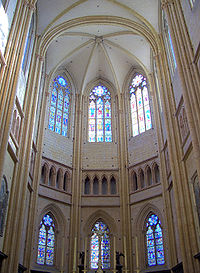