Maesteg (English: Fair Field) is a town and community in Bridgend County Borough, Wales. Maesteg lies at the northernmost end of the Llynfi Valley, close to the border with Neath Port Talbot. In 2001, Maesteg had a population of 17,859,[1] but it is now at an estimate of 20,000.[citation needed]

Historically a part of Glamorgan, the growth of the town started with the opening of ironworks in the 1820s and 1830s.[2] Once a coal mining area, the last pit closed in 1985. With the decline of the coal industry and, more recently, the closure of one large factory producing cosmetics and another manufacturing vehicle components, the valley has become a residential/dormitory area for the Port Talbot, Bridgend and Cardiff journey-to-work areas. 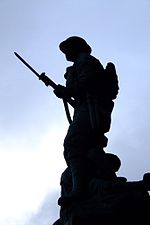 Before the development of industry in the 1820s, the Llynfi Valley was a sparsely populated area of scattered farms. The nearest settlement was the village of Llangynwyd located on the hillside about two miles south of the present-day town centre of Maesteg. Close to Llangynwyd is an extensive earthwork known as Y Bwlwarcau, an Iron Age enclosure that is probably a remnant of the earliest settlement in the Llynfi district.

During the Middle Ages the valley was part of Tir Iarll (the Earl’s Land), an area ‘famous for its game coverts, its woods and sparkling streams’ that was set aside as a hunting reserve by Robert Fitzhamon, Earl of Gloucester, the Norman conqueror of Glamorgan. [3] Up to the 18th century many of the farms of the Llynfi Valley became centres for local culture. For example Llwydarth, the home of the influential Powell family, was a centre for writers and poets in Glamorgan in the 17th century.

The origins of the present-day community in the Llynfi Valley date from the late 1820s when the area’s considerable coal and iron-ore resources were developed on an industrial scale for the first time. In 1828 a 15-mile horse-drawn railway was completed between a new harbour at Porthcawl and Garnlwyd in the Llynfi Valley. This was the Dyffryn Llynfi and Porthcawl Railway (DLPR); it was extended to the Coegnant district near the head of the valley in 1830.[4] The railway opened-up the district and prompted the formation of an iron company which began building a works on Maesteg Uchaf Farm, near the site of the present-day town centre, in 1826. The company took its name from the farm and, by 1831, two furnaces were in blast and the first rows of workers’ housing had been completed near the Maesteg Ironworks. At about the same time one of the first zinc smelters in Wales was set up on Coegnant Farm near the northern terminus of the DLPR.[5]

Part of the Maesteg Sports Centre.

In 1839 work on a second, larger, ironworks commenced at Nantycrynwydd Farm on a site now largely occupied by the Tesco store and adjoining car park. The works, which became known as the Llynfi Ironworks (or ‘The New Works’) was started by the unsuccessful Cambrian Iron and Spelter Company and was bought by the ambitious Llynvi Iron Company in 1845. The Cornstores section of the Maesteg Sports Centre and the adjoining base of a blast furnace remain as links to the Llynfi Works and the valley’s significant 19th century iron industry. The two ironworks, with associated collieries and new housing, transformed what was an area of scattered farms with a population of about 400 in 1821 into a growing township with a population of 4,000 by 1841.

The Cambrian/Llynfi Works attracted the investment capital of a number of prominent figures from the early Victorian period including the poet William Wordsworth, who was a Cambrian shareholder in the early 1840s, Sir Felix Booth, the gin distiller, and the writer and radical politician, Dr John Bowring.[6] Bowring invested heavily in the Llynfi Works in the mid 1840s and, for a number of years, that part of the valley around his works was known as Bowrington. During his association with the Maesteg district he campaigned in Parliament for a decimal system of coinage and was largely responsible for the introduction of Britain’s first decimal coin, the florin or ‘two shilling piece,’ (now the ten pence piece - 10p). John Bowring lost his capital in the trade depression of the late 1840s although the iron company continued trading. After his Llynfi venture, John Bowring became British Consul in Canton, China, and was Governor of Hong Kong 1854-59.

The iron industry in Maesteg continued, with varying degrees of success, until wrought iron making was replaced by the manufacture of cheaper, mass produced steel during the 1870s. In its heyday, after the opening of the broad-gauge, steam-hauled Llynfi Valley Railway in 1861, the Llynfi Works had a reputation for producing high-quality iron. In the mid-Victorian period there was a flourishing export trade to Southern Italy and Turkey for example, rails were exported to the USA and Llynvi ‘Navy Quality’ No.3 Cable Iron was highly regarded by the makers of Admiralty-tested anchor chains.[7] However, as the Llynfi site could not be adapted for the production of steel, iron making ceased in the Maesteg area in 1885.

During the mid 1880s with the closure of the Llynfi Works and its associated collieries, the Maesteg district, with a population of about 10,000, faced an uncertain future. Fortunately, the local coal industry began to expand with the formation of North’s Navigation Collieries Ltd in 1889. The colliery company was led by the remarkable Colonel North, the ‘Nitrate King’ and, some years later, in 1900, another company led by Sir Alfred Jones of the Elder Dempster shipping line also developed collieries in the valley. Due to the expansion programme set in motion by the two mining companies, two of the local, former iron company collieries were modernised (Coegnant and Garth) and two new large collieries were sunk at Caerau and St John’s (Cwmdu). Because of the development of the coal industry, the local population increased from about 10,000 in 1891 to almost 30,000 in 1921.

During the years 1890 to 1925 the valley gained a worldwide reputation as a producer of Admiralty-grade steam coal, high quality coking coal and what was regarded as the best house coal in South Wales. By the early 1920s there were over 7,000 miners at work in the valley. However, as the area depended to such a large extent on the coal export trade, it was seriously affected by the trade depression of the years 1928-38.[8] During that period of acute poverty and large-scale unemployment, the population of the Llynfi Valley decreased by almost a third as many left the district to seek employment in the new light industries growing up in areas such as West London and the Midlands.

For many years after the Second World War the local coal industry employed well over 2,000 workers and new jobs were created in local Government-built factories and in new industries in the Port Talbot and Bridgend journey-to-work areas. Due to the buoyant coal industry and the success of the new factories during the years 1950-75, the population of Maesteg and district stabilised at about 20,000, roughly the figure today. With the creation of more jobs in the Bridgend and Port Talbot districts, the Llynfi Valley gradually became a residential area, a process which speeded up with the terminal decline of the coal industry during the period 1977 to 1985.

Today, the valley faces another employment crisis, just as it did in the 1880s and the 1930s, with the closure of two local factories in 2007-08 which were the largest employers in the district.

Maesteg has three railway stations, all on the Maesteg Line. Services are operated by Arriva Trains Wales and run directly to Cardiff Central via Bridgend. The services usually continue to Cheltenham Spa via Newport and Gloucester. The terminus station is Maesteg, the other two stations are the most recently built Maesteg (Ewenny Road), and Garth station which serves the Garth and Cwmfelin villages situated just outside Maesteg. A bus service replaces a withdrawn rail service from Maesteg to Caerau.

In the past, there were other railway stations in Maesteg. Llangynwyd Station used to lie on the Maesteg line a few miles east of where Garth Station is today, and Maesteg (Neath Road) which was on the old Port Talbot Railway Line but these are now closed.

The original Maesteg railway station was situated a few yards west of the terminus that is there today. Remains of the original station are still there behind the Asda Store, including the platforms and the bridge joining the two platforms. The old track was removed in 2007 during the land reclamation project.

Maesteg Bus Station is situated to the rear of the town hall. First Cymru operate the majority of the services from this station. Services run to Bridgend, Swansea via Port Talbot, Caerau Park, Llangynwyd and Cymmer. There are no bus services to Cardiff from Maesteg but passengers can change at Bridgend to access a service to Cardiff.

Plasnewydd School is a primary school near the Maesteg town centre. It is one of the biggest primary schools in the Llynfi Valley, with just over 400 pupils. Plasnewydd is now an eco-school.

Maesteg Town Council consists of seventeen councillors representing the Llynfi Valley, made up of the wards of Maesteg West, Maesteg East, Nantyffyllon and Caerau. In total, 13 of the 17 Councillors are Labour, 3 are Indepdendent and 1 Liberal Democrat.

The largest religion in the valley is Christianity,[11][12] the majority of denominations being Nonconformist.

Maesteg has a tradition of music and theatre. There are many local groups providing music styles from the traditional male voice choir music and Curtain Up Youth Theatre to the more modern rock band, Funeral for a Friend, who originally hail from Maesteg.

Maesteg Children's Choir hosts many concerts throughout the year, and Curtain Up Youth Theatre has been performing musicals since the turn of the millennium, giving children of the valley a chance to showcase their talents. Maesteg Amateur Operatic Society recently celebrated its 60th anniversary with a production of 'The King and I.' The society continues to flourish with talents from all ages eager to perform, ranging from 16 to founder members, who are still active, at 80 and above.

Artist Christopher Williams was born in Maesteg in 1873. Six of his paintings are on display in Maesteg Town Hall.

The Welsh national anthem Hen Wlad Fy Nhadau was first performed in Maesteg, in the vestry of the original Capel Tabor which is now Maesteg Workingmen's Club.

Maesteg is home to Maesteg Park A.F.C. a football (soccer) team founded in 1945[13] and affiliated to the Football Association of Wales. There are four Welsh Rugby Union teams in Maesteg. The older is Maesteg RFC founded in 1877, while Maesteg Harlequins RFC were formed in the 1920s. Other rugby union teams from the area include Nantyffyllon RFC, and Maesteg Celtic RFC.

As part of Bridgend County Borough, the local radio station is 106.3 Bridge FM. Bridge FM is the most-listened-to radio station in the County Borough.[citation needed] The breakfast-time presenter, Lee Jukes, has close ties with the Maesteg Gleemen Male Voice Choir, and is also a patron of Maesteg Amateur Operatic Society. The town is also served by three local newspapers: The Glamorgan Gazette, published weekly, has its main office in Bridgend, but prints news related to Maesteg; The Gem, formerly The Recorder, a free weekly, printed in Cowbridge, and The Llynfi News, a free monthly paper, based in Maesteg.